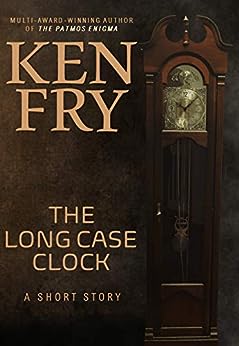 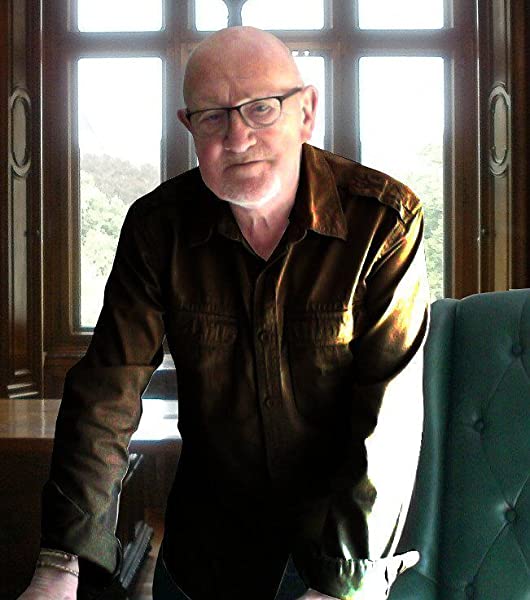 by Ken Fry (Author), Eeva Lancaster (Editor) Format: Kindle Edition
See all formats and editions
Sorry, there was a problem loading this page. Try again.
A free short story from the bestselling and multi-award-winning author of The Keeper's Cup, The Lazarus Succession and The Patmos Enigma. Recommended for new adults and adults alike.

Always take heed of the locals...
Tick tock tick tock, you should never be alone with a speaking clock.
It's timeless and sees and hears all.
And it knows your weaknesses...

"This very short story is akin to a body-builder flexing his bicep. Author Ken Fry shows his writing prowess in this tale..."

BESTSELLING NOVELS
The Keeper’s Cup
The Patmos Enigma: Quest of the Wandering Jew
The Lazarus Succession

Bestselling and multi-award-winning British author Ken Fry, holds a university Master's Degree in Literature and has traveled around the world. The places and events are reflected in his stories and most of his tales are based on his own experiences.

He has extensive knowledge of the Art world, which he acquired while working as a Publisher in a major UK publishing house -- a wholly owned subsidiary of the HEARST Corp of the USA. In his thirteen years with the company, he worked within the Fine Arts and Antiques division of the organisation and controlled four major international titles.

He is now retired and devotes his full time to writing. He lives in the UK and shares his home with 'Dickens' his Shetland Sheepdog.

Join Ken Fry's Circle of Readers and get free books.

CJDsCurrentRead
4.0 out of 5 stars Worth the quick horror read!
Reviewed in the United States 🇺🇸 on October 3, 2022
Verified Purchase
I got this for kindle for free during a spooky sale. It’s a quick and enjoyable 25 pages.

Septimus has lost his job even though he’s born from pretty good stock. If that wasn’t bad enough, his wife, who’s still working, has grown to revile him for it. So when they’re on vacation and the long case clock starts speaking to him, the craziness doesn’t seem so extreme.

The most unbelievable part of this story to me, is people who hate each other, and spending time together, going on a vacation. Maybe that’s just me.

At only 25 pages, I found this very enjoyable. Supernatural and murdery horror at its finest, short. (At least in my opinion!). A bit creepy, a bit random, and definitely bloody.
Read more
Helpful
Report abuse

Priscilla Bettis
5.0 out of 5 stars A Dread-Filled Occult Horror Short Story
Reviewed in the United States 🇺🇸 on September 18, 2022
Verified Purchase
This story sucks you in right away. Then you can't stop reading because you have a feeling something bad is going to happen with all that hate between a married couple. I loved the use of food and an old clock as story props, and I enjoyed the clever ending.

Sahreth 'Baphy' Bowden
4.0 out of 5 stars A bit of Poe and Grimm
Reviewed in the United States 🇺🇸 on October 9, 2020
Verified Purchase
I don't want to say too much for fear of ruining the story, but 'The Long Case Clock' gave me the feeling of Brothers Grimm meets Edgar Allan Poe. It had the eerie atmosphere/premise and violence of Poe's work with the morose warnings popular of Grimm's Fairy Tales. The way the author melded the psychological aspects of the main character's struggles with his own self-worth, dreams, and his crumbling relationship with a supernatural force that uses these things to nurture his darker, aggressive, and arguably selfish thoughts makes for an intriguing read which has the reader second-guessing their own feelings and actions as well as how much they are to blame for what dim places they may find themselves in.
Read more
Helpful
Report abuse

Gabrielle
4.0 out of 5 stars Tasty Morsel
Reviewed in the United States 🇺🇸 on April 10, 2021
Verified Purchase
Short but satisfying read that delves into an unhappy marriage and takes us down a path dotted with horror and mayhem. I liked the build up to the climax. I’m still not sure if Septimus was genuinely insane or if the rented house was in fact a point of evil, and I’m okay with that. With that said, I only wish the ending had gone a tad bit longer. There was much more to discover about that clock. Breaking the 4th wall was also interesting. Doesn’t happen much in books.
Read more
Helpful
Report abuse

Kindle Customer
5.0 out of 5 stars Madness and Horror in one short story
Reviewed in the United States 🇺🇸 on March 6, 2021
Verified Purchase
Author Ken Fry brings us the tale of Septimus a man who is unhappy with this marriage. Septimus wants to have his own restaurant where he can cook his food and serve it to waiting costumers. But his wife always puts him down forcing him to drink more and more. That is until one day that his clock starts talking with him and comes up with a way to kill his wife. This is a great short story that looks at the mind of a man as he falls into madness and you'll like the ending. I highly recommend this story to all Horror fans.
Read more
Helpful
Report abuse

Michele
5.0 out of 5 stars So Clever
Reviewed in the United States 🇺🇸 on September 30, 2021
Verified Purchase
This is my first Ken Fry story and I know it won't be my last. I so enjoyed his creepy little story, but I was completely taken surprise by the ending. I'm sure everyone that reads this will like it too.
Read more
Helpful
Report abuse

Bri
5.0 out of 5 stars Great Storytelling
Reviewed in the United States 🇺🇸 on May 27, 2020
Verified Purchase
I have read this in a short story collection. When I saw it as a single I wanted to read it again. This one was my favorite. Septimus and the clock are well-written and fleshed out characters. Even Gertrude who only appears at the beginning and end of the story is a memorable character. I loved the ease of the author's storytelling, the way he draws the reader in and assures a connection between the reader and the character, Septimus. This story can be read completely when you have no more than a minibreak.
Read more
One person found this helpful
Helpful
Report abuse

S. Powell
5.0 out of 5 stars This story is very tense and engrossing. It reminds me of Stephen King's writing.
Reviewed in the United States 🇺🇸 on June 12, 2020
Verified Purchase
This very short story is akin to a body-builder flexing his bicep. Author Ken Fry shows his writing prowess in this tale of a husband, Septimus, who's gotten used to his wife's verbal abuse over the years. But what happens when someone - or something - begins taunting the drunk Septimus to get his revenge over his wife? And who or what is the voice talking to him from within the long case clock?

This story is very tense and engrossing. It reminds me of Stephen King's writing.
Read more
Helpful
Report abuse
See all reviews

Lawrence Wray
5.0 out of 5 stars A quick and very entertaining read.
Reviewed in the United Kingdom 🇬🇧 on June 23, 2020
Verified Purchase
Bought it today, read it this afternoon in one sitting.
It's a clever short story which incorporates brief references to some childhood poems which lend a nice sinister air before the conclusion.
Shorts have to carry the reader along and surprise at the end, and this ticks all the boxes.
Read more
Report abuse

Izzy Fulton
5.0 out of 5 stars The Speaking Clock
Reviewed in the United Kingdom 🇬🇧 on February 27, 2021
Verified Purchase
This was an interesting short story, well written with a likeable character, I like a short story to have a good ending.
Read more
Report abuse
See all reviews
Report an issue
Does this item contain inappropriate content?
Report
Do you believe that this item violates a copyright?
Report
Does this item contain quality or formatting issues?
Report