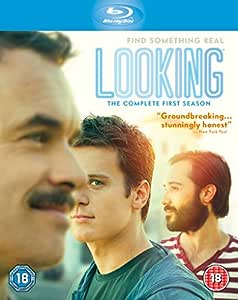 All eight episodes from the first season of the HBO comedy drama following the lives and loves of three gay men in San Francisco. Patrick (Jonathan Groff), Agustín (Frankie J. Álvarez) and Dom (Murray Bartlett) are best friends who help each other navigate their way through the trials of their professional and private lives. The episodes are: 'Looking for Now', 'Looking for Uncut', 'Looking at Your Browser History', 'Looking for $220/Hour', 'Looking for the Future', 'Looking in the Mirror', 'Looking for a Plus-One' and 'Looking Glass'.

4.3 out of 5 stars
4.3 out of 5
98 global ratings
How are ratings calculated?
To calculate the overall star rating and percentage breakdown by star, we don’t use a simple average. Instead, our system considers things like how recent a review is and if the reviewer bought the item on Amazon. It also analyzes reviews to verify trustworthiness.
Top reviews

K. Chang
1.0 out of 5 stars Wrong region
Reviewed in the United States on August 18, 2019
Verified Purchase
I revived the DVD but cannot watch it because it is not made for the US region. I wish the seller could warn the consumers.
Read more
Helpful
Comment Report abuse
See all reviews

Tommy Dooley
5.0 out of 5 stars Brilliant and Engrossing Gay Soap
Reviewed in the United Kingdom on May 2, 2015
Verified Purchase
Made by HBO this has quality written all over it. Based in San Francisco we meet three gay friends Patrick, Augustin and Dom. They are all at the ages when life becomes more serious which normally coincides with your options getting ever limited. Dom is a waiter about to turn forty and he really wants to be his own boss and meet that certain someone. Patrick makes video games and is single but sometimes lacking belief in his own talent. He also has a new boss and he is not only young, good looking but English.

Then Augustin has met that special someone and set up home but seems to be pressing the self destruct button in everything he does almost as if he can't bear the thought of having it all. The three of them have their separate hills to climb and each other for support. This is the beginning of their stories.

This is just brilliant a rival to the original `Queer as folk' and it does have some sex based scenes but this is not a porn fest at all. It is all about relationships, life, dreams and the harsh realities of life. There are some great performances here - actually there is not one bad one. I loved seeing Scott Bakula as a special guest and also Russell Tovy keeping the Brit end up - if you will forgive the pun. They have made a second series too so hopefully this is one that is here to stay - at least for a while.

Mr. D. L. Rees
3.0 out of 5 stars UNFULFILLED
Reviewed in the United Kingdom on July 9, 2015
Verified Purchase
In San Francisco best mates Patrick, Agustin and Dom feel life is passing them by, each yet to achieve a lasting meaningful relationship. Patrick(29) somehow manages to get everything wrong, later confessing he worries what his mother might think of any man he brings home. Agustin(mid-30's?) has artistic aspirations, although we see nothing to suggest skills in that direction. Dom(39) yearns to be a restauranteur, chicken dishes a speciality.

In eight episodes of around 25 minutes they muse about what it is like to be gay, hoping for better times with the new men in their lives.

Others may find the short series shallow and inconsequential, annoyed with box set declarations of pioneering fare: "Frank and fearless"; "There's nothing else on TV like it".

In fact it seems dated and tame.

Such acclaim was more justified fifteen years ago when, both sides of the Atlantic, "Queer as Folk" explored such themes with greater vibrancy and more interesting characters.

Bonuses comprise six commentaries, creators and cast full of praise for what they have achieved. (To be fair, they do concede this a comedy series with very few jokes.)

I did not dislike "Looking", but yearned for more substance. Perhaps this is to be found in Season 2?
Read more
2 people found this helpful
Report abuse

Harlequin
5.0 out of 5 stars A well-observed slice of gay life and relationships without over-emphasis on the sexual side of things!
Reviewed in the United Kingdom on March 10, 2015
Verified Purchase
'Looking' is a refreshing look at gay relationships which are not just about sex. The characters are believable, the acting is natural and makes you feel you know these people intimately. It is really refreshing to find a series like this which takes ordinary daily life situations and develops them slowly and realistically. It also features our UK own Russell Tovey, a real bonus. He adds the UK dimension to life amongst US gay men.

I just loved this first series and hope there will be many more to come. If you are looking for an engaging story with a great cast then look no further .... 'Looking' is it! Definitely five stars from me!
Read more
7 people found this helpful
Report abuse

Pollyanna Cutetickle
5.0 out of 5 stars Looking- just watch it and see!
Reviewed in the United Kingdom on February 27, 2015
Verified Purchase
Looking is excellent. I actually bought this series for my friend as he didn't watch the original on sky and I thought he would really like it. Looking is funny, surprising, gritty and dramatic but also very real. Its about three male friends, dealing with careers, love lives and life in general in the very gay and sociable San Francisco.
Whilst having fun they also encounter disappointment, heartbreak, and confusion in all different areanas of their lives.
If you liked the following- Sex And The City, GIRLS, Queer As Folk (original UK version) I think you will also like Looking.
The music in the series is also outstanding!!
If your curious...give it a go you won't regret it!
Read more
2 people found this helpful
Report abuse

Billy
5.0 out of 5 stars A Truthful Portrayl that Deserved More!
Reviewed in the United Kingdom on July 31, 2016
Verified Purchase
This unique series really shows us how normal life is for three out and proud gay men living in San Francisco today.

HBO's decision to cancel this series with a one off movie is still baffling! For one thing the commitment to advertising the series was minimal at best so no wonder the ratings were low.

Yet the acting and stories were excellent. Russell Tovey acts brilliantly opposite Jonathan Groff.

There's no question about it...a streaming service should (and still could) save this gem!
It deserves more series to show us its overall story.
Read more
Report abuse
See all reviews