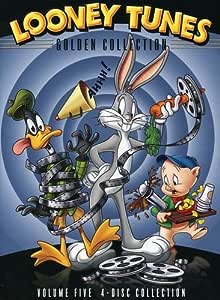 WELCOME BACK, LOONEY TUNES FANS! Please be advised that this DVD case is not to be employed as a wallet, fly swatter or cheese grater. Its one use: holding 4 discs, 60 cartoons and, per rigorous scientific analysis, bazillion laughs from a fifth glorious vault raid. Disc 1 celebrates a duo every bit as famous as thunder and lightning or beans and weenies: Bugs Bunny and Daffy Duck. Termite Terrace provides peerless takes on Fairy Tales in Disc 2. Not to be outdone, Disc 3 showcases the hilarious talent of the great animator Robert Clampett. And the fowl deeds and rabbit-fire jokes wrap with Disc 4's hamboree jamboree of Porky Pig and more classics.

The fifth collection of Looney Tunes and Merrie Melodies continues Warner Bros.' scattershot approach, mixing classics and obscurities. Among the best-known and funniest cartoons are "Ali Baba Bunny" (Daffy yelling, "I'm rich! I'm socially secure!"), "Bewitched Bunny" (Witch Hazel galloping off in a cloud of hair pins), and "Buccaneer Bunny" (a sterling example of one of director Friz Freleng's favorite gags: having the characters run up and down stairs and in and out of various doors). "Gold Diggers of '49" and "Little Red Walking Hood" show Tex Avery beginning to explore the self-reflexive gags that would be become one of the hallmarks of his mature style. In "Walking Hood," Grandma stops the action to answer the phone and place her order with the grocer--including a case of gin. "The Daffy Doc" is Bob Clampett at his most surreal, with Daffy and Porky getting sucked into an iron lung, bulging and shrinking like balloon animals. Some of the earliest cartoons predate the adoption of "The Merry-Go-Round Broke Down" as the theme song for the Warner Bros. cartoons. Many shorts from the early '30s were built around songs from Warner's musicals: "I've Got to Sing a Torch Song" (written for Gold Diggers of 1933) features caricatures of Mae West, George Bernard Shaw, Benito Mussolini, and Bing Crosby frolicking to the title tune. Greta Garbo delivers the closing, "That's All, Folks!" Like the previous four sets, Golden Collection Volume 5 comes loaded with extras that range from three WWII films in which Mr. Hook urges sailors to buy war bonds to "Extremes and In-Betweens: A Life in Animation" (2000), a documentary about Oscar-winning director Chuck Jones. Many of these cartoons will have viewers of all ages in stitches. (Unrated, suitable for ages 6 and older: cartoon violence, ethnic stereotypes, mild risqué humor, alcohol and tobacco use) --Charles Solomon

Page 1 of 1 Start overPage 1 of 1
This shopping feature will continue to load items when the Enter key is pressed. In order to navigate out of this carousel please use your heading shortcut key to navigate to the next or previous heading.
Back
Next
Pages with related products. See and discover other items: duck movie, snow white movies, warner brother cartoons, warner brothers cartoons