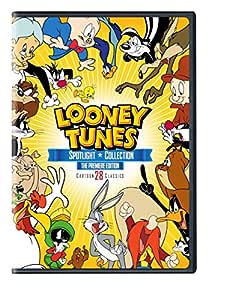 Various (Actor, Director) Rated:
NR
Format: DVD
4.7 out of 5 stars 273 ratings
Available at a lower price from other sellers that may not offer free Prime shipping.

The Looney Tunes: Spotlight Collection - Premiere Edition: They're the clown princes of animation. They're the international ambassadors of cartoon comedy. They're the fabulously funny friends you grew up with! And now, 28 of the very best animated shorts starring the very wackiest Warner Bros. cartoon characters have been rounded up on DVD for the first time ever in The Looney Tunes Premiere Collection! Just barely contained in two special edition discs, each specially selected short has been brilliantly restored and re-mastered to its original anvil-dropping, laughter-inducing glory! Featuring some of the very earliest, ground-breaking on-screen appearances of many all-time Looney Tunes favorites, it's an unprecedented animation celebration for cartoon-lovers eager to re-live the heady, hilarious, golden age of Warner Bros. animation! Sparkling with one unforgettable, landmark cartoon classic after another, there's Bugs Bunny's monstrously merry encounter with the tennis-shoe clad creature of Hair-Raising Hare. Wile E. Coyote and Roadrunner racing to cartoon immortality in Fast and Furryous. Oscar-winning animated gems, scenery-chewing Tazmanian Devils and much more! Plus, a dazzling array of totally Looney DVD bonus features! Looney Tunes Super Stars: RoadRunner/Wile E Coyote Bonus Disc: Created by legendary animator Chuck Jones, the series had a simple premise: The coyote, who was very hungry, tried to catch the Road Runner, who was very fast. Wile E. would try anything to catch his prey, utilizing a wide variety of products from the Acme Company (rocket skates, giant magnets, foot springs, etc.) Regardless of the scheme, it would always backfire, and Wile E. would end up trapping, flattening, or blowing himself up. The coyote was persistent, though. No matter how many failures he met with, no matter how many times he fell off a cliff, no matter how many signs he held up with the word "Ouch!" written on them, he refused to give up. Signs were the only way Wile E. communicated in his shorts with the Road Runner, and the bird only spoke the two-word catchphrase, "Beep Beep!" This contains a compilation of 15 shorts of one of the Looney Tunes franchise's most popular characters, Roadrunner and Wile E. Coyote and includes the 2010 theatrically released CGI Roadrunner shorts.

Neda Essa
5.0 out of 5 stars Keeps the kids entertained on the road.
Reviewed in the United States on April 15, 2019
Verified Purchase
My kids really enjoy watching Looney Tunes. I have the baby Looney Tunes CD which my little ones told me they enjoy more but still love the "grown up" Looney Tunes as well. Constantly playing this CD on road trips in the car and it definitely keeps the kids entertained.
Read more
4 people found this helpful
Helpful
Report abuse

Christopher M.
5.0 out of 5 stars Looney tunes
Reviewed in the United States on November 24, 2019
Verified Purchase
Love the looney tunes grew up with them.
Read more
4 people found this helpful
Helpful
Report abuse

Wendy
5.0 out of 5 stars Great DVD
Reviewed in the United States on February 17, 2019
Verified Purchase
My grandkids love this! They are 5 and 7.
Read more
3 people found this helpful
Helpful
Report abuse

andrew
5.0 out of 5 stars Looney tunes
Reviewed in the United States on December 29, 2020
Verified Purchase
Iam happy with the movie of course its the old looney tunes but shiping i had a problem they lost my movie i had to wait even longer but amazon did give me a 5$ credit so iam happy for the wait so still 5 stars
Read more
Helpful
Report abuse

Fishtard
5.0 out of 5 stars Classic
Reviewed in Canada on December 29, 2020
Verified Purchase
Bought for my son, I think I enjoy them more!
Read more
Report abuse

pamjaxon
5.0 out of 5 stars My kid loves it
Reviewed in Canada on January 10, 2019
Verified Purchase
A good collection of cartoons
Read more
Report abuse