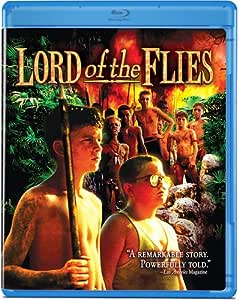 Lord of the Flies [Blu-ray]

Shipwrecked U.S. schoolboys turn savage on an island in this version of William Golding's 1954 novel.

4.6 out of 5 stars
4.6 out of 5
807 global ratings
How are ratings calculated?
To calculate the overall star rating and percentage breakdown by star, we don’t use a simple average. Instead, our system considers things like how recent a review is and if the reviewer bought the item on Amazon. It also analyzes reviews to verify trustworthiness.
Top reviews

yizzy99
5.0 out of 5 stars I love this movie
Reviewed in the United States on June 15, 2020
Verified Purchase
If you want a portrayal of the book, you’re better off watching the 1960s version. I happen to love this 90s version. It was shown to my 7th grade class after we read the book. Due to my age, I identified more strongly with these teenage characters than if they had been young children. From my 13-year-old, female perspective, I could immediately see my male classmates willingly devolve into anarchy after a few weeks without clean laundry. Yes, the kids swear exactly like real teenage boys swear. If we could watch it in school in the 90s, how bad could it be?

The characters and their symbolism are mostly still intact. Ralph, the “adult” of the group with a high moral compass, desperately wants to set up a democratic micro civilization. Jack is the hunter and protector from the monster, able to pull the boys into his bloodthirsty tribe where he rules as dictator. Roger is a sociopath with dead eyes whose quiet presence is kind of creepy. Simon is quiet and stares at things. The only drawback is Piggy, who in the book is supposed to be the intelligent voice of reason. It’s lost here because the kid who plays him is extremely irritating to the point where you’re grateful for Roger’s large rock.

I was happy to buy this movie after not seeing it since the mid-90s. It would have held up better had they not insisted on putting a timestamp on it (they talk about the 80s tv show “ALF”) and the picture quality looks like VHS, but it’s still good. I could see it being remade again. Anarchist kids are always interesting.

Randall Krause
5.0 out of 5 stars Movies are not books, and for good reason
Reviewed in the United States on August 5, 2014
Verified Purchase
I don't know why there is always so much criticism of this movie. By no means would I expect it to rival the earlier 1960s adaptation, because it is not intended to be a replacement. It is a reimagining of Golding's novel, and one that I think accomplishes that goal very well. Not all screenplays need to serve as Cliff's Notes. Some of us find enjoyment in films that are different from the books in which they are inspired by (not to mention, many stories don't translate perfectly to screen and deserve an artistic interpretation that better fits the medium). If someone is that much a fan of Golding's novel that they really bought this movie expecting it to be word-for-word transcription with no deviation whatsoever, then my advice would be to go back and read the book and stay away from watching movies.
Read more
30 people found this helpful
Helpful
Comment Report abuse

waremtae
5.0 out of 5 stars Good movie
Reviewed in the United States on December 7, 2018
Verified Purchase
I don't get the haters of this movie. No, it doesn't mirror the book. No movie ever does. It gets the point across to a younger generation and that is the important thing.
Read more
7 people found this helpful
Helpful
Comment Report abuse

Kenwyn Whitford
1.0 out of 5 stars Don't waste your money
Reviewed in the United States on June 7, 2019
Verified Purchase
This, with out a doubt, is one of the worst movies I have ever purchased. I kept wondering when it would align with the book. It doesn't. As hard as drama tries to be forced with supposed tense music, it just doesn't happen. The characters are wooden, sophomoric and too be honest, tiresome. I am going to get the B & W version. There is no way possible it could be worse than this.
Read more
2 people found this helpful
Helpful
Comment Report abuse

meow
3.0 out of 5 stars just okay
Reviewed in the United States on September 6, 2012
Verified Purchase
After reading the novel, the girl whom I tutor and I decided to watch the movie to compare/contrast the two. I was a little disappointed. The movie seemed to move very fast, and it didn't develop the characters very well.

When Piggy was killed, I didn't have the connection to him that I did in the book, and his death was very non-monumental. Also, the gradual shift from civilized to savage was not portrayed very well. It was interesting that this interpretation changed the characters so that they were American cadets (military school), not English choirboys. It a way, the uniforms took away from the innocence that the boys possessed, and lost, in the novel.

In all, it was okay. There's a lot of language, which is what I suppose would happen if there were no adults around! Additionally, there IS an adult in the story. He becomes and integral part of "the beast," which I thought was an interesting twist. Since it was modern-day Americans, they couldn't have a parachutist be the beast....

A decent movie if you've read the novel, but wouldn't highly recommend. There is a black and white version that was done in the 60's that looks to be more accurate...I'm curious as to how that one is.

Mr. D. Lloyd
1.0 out of 5 stars Appauling
Reviewed in the United Kingdom on December 26, 2017
Verified Purchase
Appaulling reproduction of a classic book, This is typical, American film industry trying to make something better than the brilliant British classic Book and the immensely powerful and timeless Black and White film.

It could have been called Vietnam for kids and an excuse to say swear words!
Read more
5 people found this helpful
Report abuse

Derek Oliver Sibthorpe
4.0 out of 5 stars Not bad but no substitute for the original B&W movie.
Reviewed in the United Kingdom on August 17, 2020
Verified Purchase
decent remake of the original which is Americanised with U.S. children. Silly insertion of adult (pilot) who survives but semi-conscious from his injuries who suddenly leaves children's camp at night to a cave where he is mistaken for 'the monster' by the children and killed.
Read more
Report abuse

The Begrudger
1.0 out of 5 stars Banal and trivial
Reviewed in the United Kingdom on January 18, 2018
Verified Purchase
Life is too short to list the ways this film makes a great work of art banal and trivial. The list is precisely as long as Golding’s book. As others have said get hold of Brooke’s superb adaptation. Life is also too short to waste ninety minutes on this one...
Read more
4 people found this helpful
Report abuse

Mrs Carolyne Broadbent
1.0 out of 5 stars Terrible.
Reviewed in the United Kingdom on April 1, 2018
Verified Purchase
What a terrible re-make of this classic. The American accents were worse than nails being scraped down a blackboard. Couldn't stand to see it all the way through; had to turn it off.
Read more
3 people found this helpful
Report abuse

Bäckestrand Bengt
1.0 out of 5 stars Bad
Reviewed in the United Kingdom on June 28, 2020
Verified Purchase
This seller is not good at adverticing. The picture is a bluray about and with the conductor Hans Knappertsbusch but, it’s not what you get. You get a german version of ”The Lord of the Flies” film. Please, be more careful how you advertice!!!!!
Read more
Report abuse
See all reviews