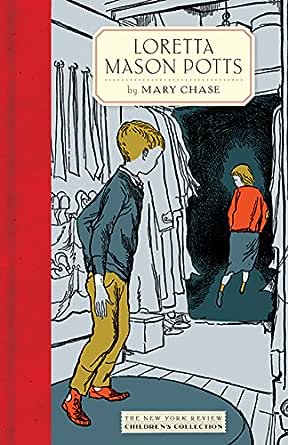 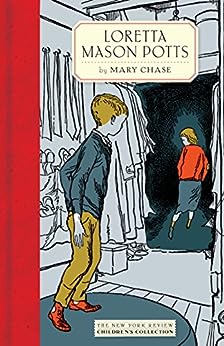 Mary Coyle Chase (1907–1981) was born in Denver, Colorado, and lived there all her life. She worked for various Denver papers as a journalist, began to write plays, and in 1944 had a huge success with Harvey, which won the Pulitzer Prize and was later made into a movie starring Jimmy Stewart.

Harold Berson (1926–1986) was born in Los Angeles and studied art in Paris. Loretta Mason Potts, originally published in 1958, was the first book he illustrated, but he would go on to draw pictures for more than ninety books, including many that he also wrote. --This text refers to the hardcover edition.

“The poignancy of Peter Pan lingers over this fantasy, but it has its own special charm, the charm of unabashed fancy and resounding good sense, which made the author’s Harvey a favorite of adult audiences.” —Kirkus Reviews (starred review)

"Surely, Loretta Mason Potts will take her place among the memorable characters of children's literature and her story should be a favorite for a long time to come." —Chicago Daily Tribune --This text refers to the hardcover edition.

4.9 out of 5 stars
4.9 out of 5
50 global ratings
How are ratings calculated?
To calculate the overall star rating and percentage breakdown by star, we don’t use a simple average. Instead, our system considers things like how recent a review is and if the reviewer bought the item on Amazon. It also analyzes reviews to verify trustworthiness.
Top reviews

Katie
5.0 out of 5 stars This was one of my favorite books when I was a child
Reviewed in the United States on July 19, 2017
Verified Purchase
This was one of my favorite books when I was a child.. I read it at least five times between ages 10 and 14. I read it again when I was 20 after finding an out-of-print copy without a cover on Amazon for $30, and later gave it to my little sisters. After that, for 15+ years, every time I looked for a copy to give to a friend the out-of-print copies just like the one I bought were $800 and up! (My sisters had lost their copy of course. 😱) Anyway I'm so excited to see Loretta Mason Potts in print again. I bought the Kindle version to read to my own 11-year-old daughter this year. This story of a "naughty" attention-starved girl and "good" but curious boy who stumble upon and become enchanted by mysterious flamboyant and extravagant people in a castle on a dark hill in the woods is just fascinating and timeless! The mystery unfolds at a perfect pace to keep any reader's attention, wondering what's actually happening and what they'll say next. My daughter and I also enjoy some of the older phrases and ideas in this and many classic books. ❤️
Read more
6 people found this helpful
Helpful
Comment Report abuse

Margery L. Goldstein
5.0 out of 5 stars Long-remembered images from a long-lost book, great for age 8 and up
Reviewed in the United States on September 5, 2015
Verified Purchase
A lifelong mystery seems to have been solved: Over 50 years ago, when I was eight, I read a book in the library of the town where my family was vacationing (Hunter, New York, and the town library was housed at the time on the second floor of a school building). All I recalled of the book afterwards was that there was a magic entrance in the back of a closet that led to a bridge over a stream. If you went over the bridge, you became tiny -- the same size as the people on the other side of the bridge -- but if you happened to walk through the stream, you remained big. I remembered a few scattered images: a girl whose sweater had holes in it coming to live in a house; a ballroom with many windows, a rescue by someone who went through the stream and remained big. I never recalled the name of the book or the author, but if this was the book that is not surprising, as the cover bears two ladies' names but apparently no title! For decades, I have tried to find out what the book was, and people would say it must have been "The Lion, the Witch, and the Wardrobe." I knew that was not the case : this definitely involved a closet, not a wardrobe, and the bridge over the stream, critical to the plot, is nowhere to be found in Narnia.

After all these years, practically nothing in this story was familiar to me, but I found it an excellent read, with insights into children's and adults' minds, and with some digs at wealthy suburban life in 1950s America. The 1950s environment (with its anxieties about slang and comic books) is quite realistic, but the magic is genuine, scary folk magic -- little people under the hill who entice children away from their homes -- that is not compromised or explained.

Maverick
5.0 out of 5 stars My First Trip to Another World
Reviewed in the United States on November 10, 2015
Verified Purchase
I first read this book in elementary school, and it was my very first experience traveling to another world. Until that time, I didn't know that other people imagined secret places they could go, too.
I had tried to find this book many times, only to be told that it was out of print. I was so excited to find it on Kindle!
While very dated, having been published in 1958, the story is still as fabulous as I remembered. A tunnel in the back of a clothes closet (not unlike Narnia) the takes you to a secret world.
A terrific story to read or read to others.

Caroline W.
5.0 out of 5 stars Most memorable book of my childhood
Reviewed in the United States on June 10, 2004
Verified Purchase
When you have kids, you start racking your brain, trying to remember what you loved so you can present them with a book you KNOW they'll love too.
Loretta Mason Potts was one of the first that came to mind. It's the story of a girl Loretta Mason, who finds a magic portal into another world where she's treated like a princess. She refuses to go home to her family and insists on living in the Potts house with another family because their house contains the portal. Her mother goes to see her every day, but doesn't mention her again to the other children, and can't think of anything to do about the situation except pay the Potts family to keep her.
The story really revolves around her younger brother, who is the main character, and who finds out that he has an older sister (Loretta) by accident. What's great about this is that you can hand the book to an 11 or 12 year old boy, and watch him get sucked into the story without any concern that it might be a "girl" book because of the title. As the mother of boys, I truly appreciated the fact that it appealed to both genders.
The book is hardcover with no dust jacket. The price may seem high to someone who has never read it, but anyone familiar with Loretta Mason Potts will (like I did) simply purchase it without question, grateful that you FINALLY found it after decades of wishing you still had a copy.
Then hand it to any of your children, boys or girls. It's still weaving magic 50 years after it was written.

ELAINE
5.0 out of 5 stars Wonderful!
Reviewed in the United States on June 24, 2012
Verified Purchase
in reading the previous reviews i am really surprised to find the same feeling for Loretta Mason Potts that I have. I read it in elementary school and was just mesmerized. We could only keep a book one week so every other week I would check it out and read it again. Later I tried to find it and only could remember that the author's name began with a C and her brother's name was Colin. So began a search, before the internet, in gigantic books of children's literature in the C section. Finally the internet found me a copy some 45 years later. Now I find out that the author is also the woman who wrote the play Harvey which is my all time favorite movie. What a great imagination in Mary Chase!
Read more
5 people found this helpful
Helpful
Comment Report abuse

silverkrisi
5.0 out of 5 stars beautiful childhood book in my memories
Reviewed in the United States on May 14, 2015
Verified Purchase
What a lovely, beautiful childhood book in my memories. It's one of my all time faves. I am so satisfied to finally find this book (again) and have it under my roof. BTW, I am 65 years old and I'll love to reak this book again. My second fave book from my childhood is the 21 Balloons. Shipping time was set for 6 months out but it is worth the wait! I couldn't be happier. A very hard to find book, actually I would consider it rare (for me). It's probably out of print.
Read more
One person found this helpful
Helpful
Comment Report abuse
See all reviews

anon
4.0 out of 5 stars A worthwhile read
Reviewed in the United Kingdom on December 10, 2015
Verified Purchase
Enjoyed it. A bit scary for my daughter, but different & interesting.
Read more
Report abuse

Deirdre Chase
5.0 out of 5 stars Five Stars
Reviewed in Canada on May 9, 2015
Verified Purchase
Loved it !!!! I may be biased though. Full disclosure: the author is my grandmother!
Read more
Report abuse
See all reviews