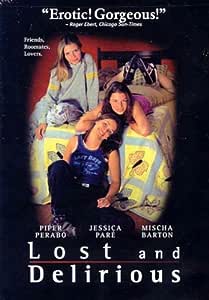 At a private, all-girls boarding school three young girls discover love and lust between themselves as they mature and learn the darker side of love: intrigue, jealousy and revenge.

4.5 out of 5 stars
4.5 out of 5
344 global ratings
How are ratings calculated?
To calculate the overall star rating and percentage breakdown by star, we don’t use a simple average. Instead, our system considers things like how recent a review is and if the reviewer bought the item on Amazon. It also analyzes reviews to verify trustworthiness.
Top reviews

R. Overall
4.0 out of 5 stars About face
Reviewed in the United States on April 2, 2013
Verified Purchase
Another girls' school flick. Ugh. Chicks rousting each other. (raspberry). So I watched it because I like Piper Perabo. Yes, a bit of nudity, and some "lesbian" writhing. But if you actually watch the movie, it has some teeth. Maybe it's because I knew a young woman who went through much of what this movie portrays, not as crazy, but all the slings and arrows of someone attracted to the same sex in a time when such was verboten (German: forbidden). I never could understand all the hate and invective aimed at her simply because she wasn't just another "boy toy". She grew up to be a marvelous person and a woman, in spite of some times I wasn't sure she'd survive. This movie reflects some of that struggle. No, not your modern "let's praise gays" movie, just a very realistic portrayal of someone trying to find herself, whom and what she really is, and struggling with a dysfunctional family background.....well, no Oscar, but I found it to be a good, satisfying movie, with three especially good actresses who didn't do characters, but rather realistic people in a condemning situation. I recommend it, especially if you want to learn that gays can be real people too, and teens really do have to figure things out, sometimes with feelings the hard way, gay or straight. No, I'm not gay; yes, I went to a private school (military academy) with many of the same prejudices; no, I'm neither pro-gay or anti-gay, I just feel people should be allowed to be themselves, and don't need a lot of unnecessary garbage from individuals on a power trip (that includes all kinds of bullies).
Read more
11 people found this helpful
Helpful
Comment Report abuse

D'vo
5.0 out of 5 stars Mischa Barton was a protegee
Reviewed in the United States on November 25, 2019
Verified Purchase
Mischa Barton comes to a strange bordering school as a "mouse" and is quickly drawn into full on teen angst identity crisis and fighting for love against "social norms" Piper Perabo and Jessica Paré give stellar preferences adding to a very full story with characters you care about. different copies different price I paid $10 at time of writing this.
Read more
Helpful
Comment Report abuse

Kevin W. Edwards
5.0 out of 5 stars Erotic and incredible movie
Reviewed in the United States on December 3, 2013
Verified Purchase
This is an incredible movie, you will laugh you will cry (near the end). mouse bradford has just arrived at perkins girls college leaving behind her father and step mother. her two friends quickly adopt her, the lost girls as they are known. her friends pauline and tory are lovers (yes its a lesbian movie but dont let that detere you ) mouse is caught in the role of accomplice and confessor between her two friends. Iam not telling you the end but it is sad. piper perabo, jessica pare and mischa barton star in this movie get this movie its incredible, acting is superb especially from mischa barton (and i so wanna sleep with her lol)
Read more
2 people found this helpful
Helpful
Comment Report abuse

Justice
5.0 out of 5 stars MOVING, BRAVE, TOUCHING, LONGING, FANTASTIC
Reviewed in the United States on May 22, 2005
Verified Purchase
I just recently saw this movie for the first time, and it has blown my mind. Every few years a film comes along that really moves me, and that I can't get out of my head. Well I think for this year and always this is the film. It really pulled/pulls on my heart strings.

The two lead performances of Piper Perabo and Jessica Pare has really mesmerised me totally. In the beginning before these two characters of Paulie and Tori are discovered, it is really beautiful to watch these two in love, and just going along there business until all hell breaks loose. The emotion, connection and love these two feel and share feels so real and honest.

And the love scene between the two is very tender and real.

Once they are revealed and Paulie's world begins to fall apart is so hard to watch at times, because I SO desperatly want Paulie and Tori to figure it all out and be together as it once was.

Like I've said this film has and always will leave a lasting impression on me, at times it's hard to get scenes of it out of my head. The raw emotion of Paulie so so excellently played by Piper Perabo, I've seen who I now consider from this performances, one of the most talentled actress' around. I hope she has a long lasting career.

Jessica Pare, I am amazed at too. Her performance of being torn for her true love for Paulie but desperatly not wanting the world and her parents to know her real feelings.

This is what is heartbreaking to watch, Tori pretending to be what her parents/family,society think/believe how she should be. ie. A hetrosexual girl, so she starts to date a boy that is interested in her, and this also contributes to Paulies melt down. This is when the film can be haunting, especially if you are so into the story and these two characters.

I absolutely recommend this movie for a number of reasons. One it isn't some dyke movie, this shows a natural, beautiful, honest look at two girls in love and the tragedy I believe at what happens when they are found out and how one partner can clam up and not reveal how they really feel for fear of what their parents and everybody will think about them, and the destruction one will go through, cause they are so in love that it is killing them.

It really is an important film to watch and it gives one something to think about.

C. Mariko
5.0 out of 5 stars UNIQUE, MAGNIFICENT AND VERY MOVING
Reviewed in the United States on November 3, 2002
Verified Purchase
This highly romantic and very sad story of "Pauline in love with Tory" takes you back to the times of the faithful and brave knights who defended their honour at any price.
The scene taking place at the library and the final sword desperate confrontation let me breathless ; so did the aesthetic quality of the filming and the outstanding soundtrack which compose a very emotionally overwhelming ensemble.
The "eagle fly" scenes are so symbolic that they engrave on your memory forever.
THIS IS A VERY INTENSE AND BEAUTIFUL FILM !
The three protagonists : PIPER PERABO (Pauline), MISCHA BARTON (Mouse), JESSICA PARE (Tory) are remarkable performers.
PIPER PERABO (I also saw "COYOTE UGLY") is definitely one of the best, intelligent new generation performers and is for sure destined for a successful carreer ("on stage theatre" included).
"LOST AND DELIRIOUS" IS ONE OF THE BEST FILMS I EVER SEEN !
It goes far beyond the question of the so called "sexual orientation" : it gives you the opportunity to think about anyone's choice, despite the politically correct "air du temps".
I JUST HIGHLY RECOMMEND THIS DVD !
Read more
2 people found this helpful
Helpful
Comment Report abuse
See all reviews

Miss Cherry
1.0 out of 5 stars Awful, awful film
Reviewed in the United Kingdom on March 3, 2020
Verified Purchase
I don't even know where to begin to describe how utterly bad and bizarre this film is. First off, it's based on ludicrous and false stereotypes of what boarding school life is like. Second, a 13 year old would never be placed in the same dormitory as two 16 year olds. It's simply a convenient plot device for the filmmakers. Just. Would. Not. Happen. In. Real. Life. Third, knowingly engaging in sexual activity in front of a minor is exposure of a minor to pornography which is a form of sexual abuse. Amazed the filmmakers never considered this but hey just a small note in this atrocious film. Fourth, in any reasonable institution, if any student/member started showing such OBVIOUS signs of psychiatric disorder someone would have contacted a medical professional/counsellor before the said student/member committed suicide. And finally, okay, I get it, losing the person you love is a heartbreaking, horrible experience that stays with you for the rest of your life. However, the VAST majority of people do not have the extreme reaction that Pauline has. Pauline's madness and grief is so fabricated and hyperbolic it is frankly nauseating and does nothing to depict or represent the sense of rejection and homophobia young LGBT people continue to suffer, if anything undermines it. I could go on at length at how utterly bad and ludicrous this film is but frankly I've already wasted enough of my life on it.
Read more
6 people found this helpful
Report abuse

Ms. S. Scanlon
5.0 out of 5 stars Excellent
Reviewed in the United Kingdom on May 22, 2014
Verified Purchase
An excellent lesbian movie that has stood the test of time as years after purchasing I am still watching it. Good storyline which is interesting and heartfelt with excellent acting by Piper Pablo. A must see!!
Read more
2 people found this helpful
Report abuse

Com d
4.0 out of 5 stars Recommend this!
Reviewed in the United Kingdom on October 24, 2018
Verified Purchase
Good story! Well acted? I enjoyed this film very much!
Read more
Report abuse
See all reviews

Page 1 of 1 Start overPage 1 of 1
This shopping feature will continue to load items when the Enter key is pressed. In order to navigate out of this carousel please use your heading shortcut key to navigate to the next or previous heading.
Back
Next
Pages with related products. See and discover other items: Best deep pools for adults