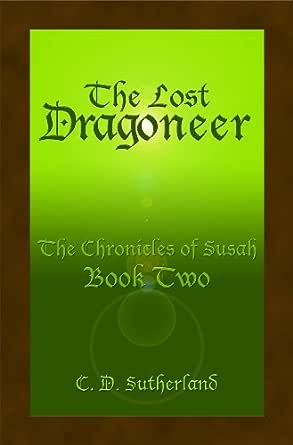 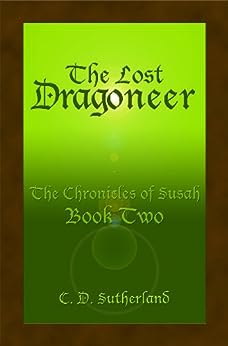 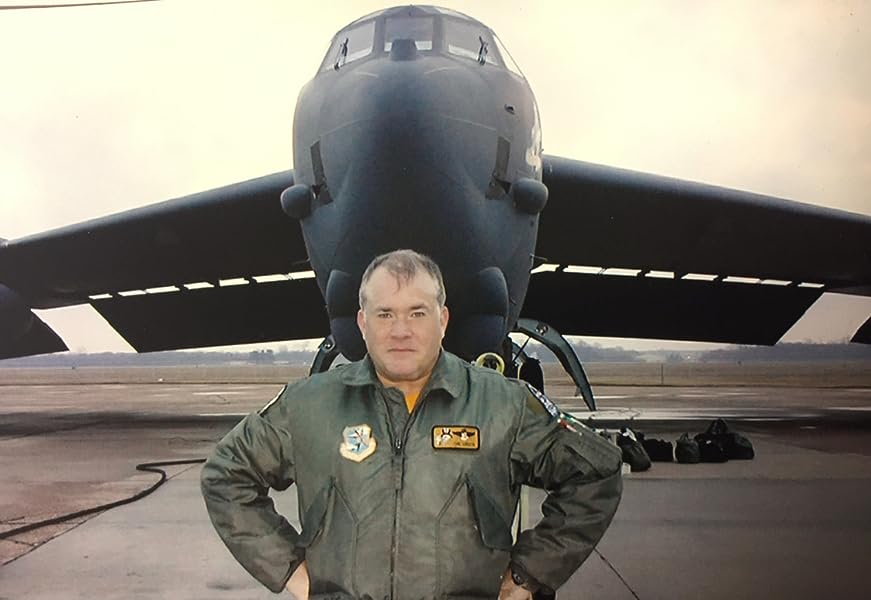 The Lost Dragoneer (The Chronicles of Susah Book 2) Kindle Edition

C. D. Sutherland is a B-52 pilot turned novelist with his THE CHRONICLES OF SUSAH series. These novels defy conventional classification as they blend action and emotional tension with technology and spiritual intrigue in a coming of age story wrapped in an epic adventure set in the antediluvian age. Born in Virginia, to the son of a coal-miner, who escaped a life in the dark Appalachian mines by joining the U.S. military, C. D. Sutherland also joined the military. After high school, he served in the Air Force for thirty-two years, seeing much of the world and doing things most men have only dreamed about doing. --This text refers to the paperback edition.

3.9 out of 5 stars
3.9 out of 5
22 customer ratings
How does Amazon calculate star ratings?
Amazon calculates a product’s star ratings based on a machine learned model instead of a raw data average. The model takes into account factors including the age of a rating, whether the ratings are from verified purchasers, and factors that establish reviewer trustworthiness.
Top reviews

Steven Pratt
5.0 out of 5 stars Great stakes with much to learn
Reviewed in the United States on January 9, 2013
Verified Purchase
"The Lost Dragoneer" expands and deepens the antediluvian world set up by book one in the series. Sutherland adds layers of political intrigue and malevolent machinations that dash Susah's hopes for a straight shot to glory and the history books. While she may be the most talented young dragoneer in history, she discovers that her raw ability does not make her career--and her life--take perfect shape on its own.

Sethica has repelled an invasion, but the war isn't over. Leadership is faltering. By and large, the citizens of Sethica don't understand the momentum is turning against them, and they are not prepared to defend themselves should the military falter. In fact, little of the city and its people could be described as embodying the potential of Seth's progeny, the last pure descendants of Adam. I find these familiar dimensions that resonate with our times today which, together with other features too numerous to mention here, account for this story's likely classification as a steampunk sub-genre.

"The Lost Dragoneer" is a fine story in its own right and an excellent sequel to "The Dragoneers." It may be centered on a young woman, but this book is not just for girls and teens. It is the work of an expansive and daring imagination that would not, and perhaps could not, create something that does nothing more than entertain.
Read more
10 people found this helpful
Helpful
Comment Report abuse

Michael Isenberg
5.0 out of 5 stars The Land of Oz meets the Book of Genesis
Reviewed in the United States on February 5, 2013
Verified Purchase
The Bible doesn't tell us much about the centuries that span from Adam to Noah. Adam's surviving sons, Seth and Cain, go their separate ways and then, in the words of Spencer Tracy's character in Inherit the Wind, the book "goes into a lot of `begats.' `And Aphraxad begat Salah; and Salah begat Eber' and so on." Lamech begets Noah, but before we get to the ark and the Flood, we're told (Genesis 6.4):

"There were giants in the earth in those days; and also after that, when the sons of God come in unto the daughters of men, and they bare children to them, the same became mighty men which were of old, men of renown."

It's an intriguing passage, but sadly lacking in detail. Recently, author C.D. Sutherland has stepped in to fill the gaps. The Chronicles of Susah transports us to a world with all the elements of other magical lands like Oz or the Harry Potter universe: a gifted protagonist, a dangerous journey, a wise old mentor, and of course, giants in the earth.

The Lost Dragoneer is the second and most recent installment in the series. Susah, the daughter of Noah, has little interest in her father's insane boat building project. She has left home and put her ability to control animals with her mind in the service of the Dragoneer Corps, a sort of dragon-powered air force for the nation of Sethica. As The Lost Dragoneer opens, the Sethicans have just won an epic battle against an army of ogres. It is a bittersweet victory for Susah, however. Most of the dragons are dead or dying and Susah must rebuild the corps. Locating and taming wild dragons is the easy part, though. Susah must also confront vicious ogres, bloodsucking trolls, temptation by Satan, and her own vanity.

Politically, Susah's world has much that is familiar. The story takes place in a time of transition. The old system of tribal government has given way to a Council of Elders, which spends most of its time taxing and regulating - and undermining the military. Much of what we learn about the political situation comes from the hotel owner Keenan. When Susah tells him how lovely his hotel is, he replies proudly, in a pointed reference to President Obama, "I built it."

But it's the way Sutherland intertwines his tale with the Bible that is the unique feature of The Lost Dragoneer. "I began with the Scriptures," he explained to me. "Anything in black in white must remain and is off-limits to alterations in my story telling. Using that approach, everything between those gaps are gray-areas and by definition free-game for my extreme fiction. After some of my fans started calling my first book Antediluvian Steampunk, I agreed the term is more descriptive than just `Religious Sci/Fi Fantasy'"

Sutherland says that some religious traditionalists have chafed at the technology that he injects into Biblical times: there are blasters as well as swords, skyscrapers as well as castles. Nevertheless, I think most Jews and Christians will appreciate the familiar people and places from the core of their faith. Everyone, even jaded atheists such as myself, will appreciate the captivating story.

Based on some internal chronology, I reckon that The Lost Dragoneer takes place 80 years before the rains start to fall and the animals come on by twosies-twosies. That affords ample opportunities for sequels: I look forward to many more installments in The Chronicles of Susah.
Read more
10 people found this helpful
Helpful
Comment Report abuse

Jason Galbraith
VINE VOICE
2.0 out of 5 stars An Extreme Militarist's Imagination of Biblical Times
Reviewed in the United States on September 6, 2013
Verified Purchase
I enjoyed reading "The Dragoneers," first in the series of which this is part 2, rather well and expected to also enjoy "The Lost Dragoneer," but I didn't. I earlier praised C. D. Sutherland for not being a fundamentalist but I now doubt that he is a Christian in any meaningful sense.

The dedication of "The Lost Dragoneer" is to Sutherland's father, "for being the most dangerous man I knew." This is in keeping with Sutherland's general disregard for men (and women) who are not "dangerous" in the sense of being able to kill people. Dachux, the heroic leader of the Dragoneer Corps, mentions casually quite early in this book that he may have to kill some Sethican soldiers (that is, those on his side) if their morale has dropped and Susah (the protagonist of the book) doesn't challenge him. While strolling the city of Sethopolis a soldier under Susah's command commits casual violence against a civilian (throwing a crystal at him to disprove his crazy idea that motion doesn't exist) which is caught on tape and used to defame the military. Again, Susah says nothing. Later, Susah leaves the Dragoneer Corps because it has been put under the leadership of an incompetent and her two jobs in the private sector are both all about killing half-ogres, ogres, Nephilim and trolls (the living excrement of Nephilim).

The essence of Christianity is love and there is a little room for love in Susah's heart. She has frequent visions of Dachux (including one very powerful one at the walls of the Garden of Eden, which the Dragoneer Corps exists to protect), whose history and rivalry with Noah, Susah's father, is further explored in this book. I read somewhere that Sutherland plans ten or eleven books for this series and chances are the conversation that will reconcile Noah and Susah will only take place much later. It's also possible that when Noah explains everything to Susah, they will not be reconciled because God has told Noah that Susah will not board the Ark.

If it is ever published, I will read the third book anyway because there are still almost 80 years to go until the Flood and that is a lot of time for Susah's character to develop. It's also a lot of time for a lot more violence and social decay to confirm God in His perception that the world He has created deserves to be destroyed. The connection between the Flood and humanity's ultimate fate (Revelations) will no doubt be explored at greater length through Sutherland's skillful skewering of modern mores and institutions. This element of the books is almost enough to make you overlook Sutherland's love of violence, the modern institution he should be skewering. There is some hope that Noah will do so when he finally explains himself -- he refuses an offer to take over the army in this book, when his father Lamech is promoted to Chief Elder, indicating his distaste for violence.

There are a few interesting developments in this book, which culminates in an extended series of battle sequences taking place in southeast Sethica. We find out that one-sixth (500,000) of the population of Sethopolis is made up of half-ogres, which suggests that the majority of the women in Sethopolis have been raped multiple times by an ogre, unless there's something special about ogre sperm such that it knocks up any woman automatically. When Abaddon captures Susah and she rejects his offer to become one of his brood mares, he decides for some reason that he would rather kill her than give her to the Nephilim and ogres, who are mostly fighting so that they can rape human women (I think). There are even entire chapters told from the point of view of a Cainite officer, Colonel Rek, who has an interesting plan to bring about an alliance between the Cainites and Sethica. But I think I have already figured out how Susah plays into this plan and that she will refuse to marry a Cainite prince. Anyway, overall, I give this book two stars and hope that the third book allows Susah's character to become a little more balanced.
Read more
One person found this helpful
Helpful
Comment Report abuse
See all reviews from the United States