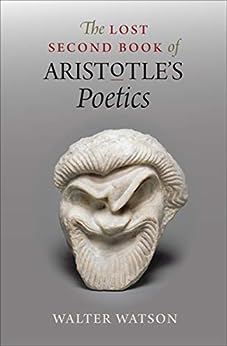 "Walter Watson brings a deep perspective steeped in Aristotle’s entire philosophy to the study of Aristotle’s view of comedy and laughter. He repeatedly shows new ways in which the much contested TractatusCoislinianus fits in with, and completes, Aristotle’s wider thought about literature, catharsis, and causation in general. Just as Herculaneum papyri are bringing us more knowledge of Aristotle’s dialogue On Poets, so this analysis makes the outlines of his Poetics II clearer than before.”

“Here, Walter Watson makes the strongest possible claim, asserting that the TractatusCoislinianus is a true and reliable summary of the lost second book of the Poetics. Readers will be especially grateful for his illuminating notes on such central—and vexed—issues in Poetics I as catharsis and the ends of tragedy; and Watson uses Poetics II to shine a welcome light on final cause, spectacle, didacticism, and the different senses of poetry. Even if readers find something here and there to disbelieve, they are unlikely to find anything anywhere in this book that they do not admire.”
-- James E. Ford, emeritus, University of Nebraska–Lincoln

“[The Lost Second Book] serves as a reliable guide to readers unfamiliar with Aristotle's thought. . . . This book should appeal to Aristotle scholars and to those interested in aesthetics more generally. Recommended.”
― Choice

“[A]nyone interested in the first great work of literary theory will find The Lost Second Book of Aristotle's Poetics accessible as well as valuable. Even anti-Aristotelians will appreciate the book, if only in finding new sources of thought in their disagreements.”
― Bryn Mawr Classical Review --This text refers to the hardcover edition.

Walter Watson is professor of philosophy at the State University of New York at Stony Brook.
--This text refers to the hardcover edition.

Read more
Report abuse
Translate review to English
See all reviews
Back to top
Get to Know Us
Make Money with Us
Amazon Payment Products
Let Us Help You
EnglishChoose a language for shopping. United StatesChoose a country/region for shopping.
© 1996-2021, Amazon.com, Inc. or its affiliates