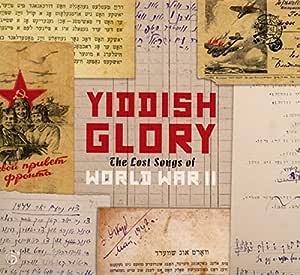 Yiddish Glory (Artist) Format: Audio CD
4.7 out of 5 stars 31 ratings
See all 2 formats and editions Hide other formats and editions
Includes FREE MP3 version of this album.&nbspProvided by Amazon Digital Services LLC. Terms and Conditions. Does not apply to gift orders.&nbspComplete your purchase to save the MP3 version to your music library.
Available at a lower price from other sellers that may not offer free Prime shipping.

As World War II raged through Europe, a group of Soviet Yiddish scholars embarked on an ambitious goal to preserve Jewish culture of the 1940s. These historians believed that it was their duty to record stories, poems and songs by Jews who lived through this. They hoped to publish these songs, but the project was never completed. Now for the first time the public will hear the voices of the Soviet Jews who were long thought to be forever silenced by Hitler and Stalin.

Russian Jewess
5.0 out of 5 stars Hitler was most certainly a Mamzer
Reviewed in the United States on June 19, 2019
Verified Purchase
Awesome album and deserved every award it got. I knew most of these songs from my grandparents and their friends by who cares, it’s both bringing them back to me and all the memories of all them at the Piano having a sing song after too much Manischewitz really too much singing Hitler is Kaputt and having fun. I love this, the songs are well chosen and hint hint there are plenty more and so many great memories came flooding back. Thank you so very much as I miss them so
Read more
One person found this helpful
Helpful
Comment Report abuse

anonymous
5.0 out of 5 stars A unique, amazing and gritty collection of wartime Yiddish songs from the Soviet Union.
Reviewed in the United States on February 5, 2019
Verified Purchase
These songs of World War II. written in the Yiddish language, were collected, then "destroyed," and eventually re-discovered as fortunes shifted in the (former) Soviet Union. They provide an amazing if gritty window into a time of pain and darkest deprivation, balanced by tales of glory and courage of those who stood against Nazi tyranny. While some elements of this collection might be considered Soviet watime propaganda, the overall story reflects a range wartime experiences from a Jewish perspective. English, Yiddish and Russian lyrics are also available. online, and will leave you dreaming of courageous soldiers and glorious partisans fighting on to victory.
Read more
One person found this helpful
Helpful
Comment Report abuse

Lucia Thon
5.0 out of 5 stars I recommend it!
Reviewed in Canada on May 3, 2019
Verified Purchase
We did enjoy the cd
Read more
Report abuse