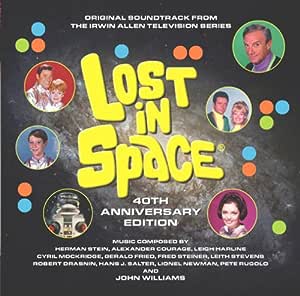 RDW
5.0 out of 5 stars Thie is FANTASTIC!!!! THey don't make TV show music like this anymore!!!!
Reviewed in the United States on February 27, 2018
Verified Purchase
If your a huge fan of the Classic Sci-Fi-TV show "Lost In Space" then this is a must have soundtrack for LIS fans. I knew and loved every bit of music on these CD's. The big surprise is that it contains the very cool music from "The Promised Planet" episode, but actually the entire 2 CD set is so much fun to listen too. IN my opinion, Lost In Space was one of the most incredible series ever made. Everything about the show was fantastic in all respects. I must admit there were a few episodes that were not that good like "The Great Vegetable Rebellion" but just the fact that it was a LIS episode made it fun to watch anyway. I will be listening to this over and over in the weeks ahead. It is a fantastic collection. I hope there is future collections like this, maybe with some dialogue from the series. But, for all the Lost In Space fans, this is a must have CD for your collection. It is a 2 CD set and has a 2 hour and 40 minute playing time, so what are you waiting for. Grab it while it is still in stock!!!
Read more
Helpful
Report abuse

Jack
5.0 out of 5 stars Classic Soundtrack Music
Reviewed in the United States on October 25, 2007
Verified Purchase
The music for Lost In Space epitomises classic television scoring, and the 40th anniversary release collates the greatest and most diverse cues used for the series. The first cd is devoted entirely to the great John Williams, who composed complete scores for several episodes in the first season as well as the Main Titles for seasons 1 and 3. If you've ever watched LIS the music featured here will be instantly recognisable and totally enjoyable. What makes this set a must for any soundtrack collector, though, is the music featured on the second disc, with compositions from no less than 12 other composers, all of whom contribute fantastically diverse material. In addition, the set includes a previously unheard Season 2 Main Title and a couple of ad break "bumpers", and restores more than 65 minutes of previously unreleased music. So it's very comprehensive! Detailed liner notes, lots of campy pics, excellent sound editing and mastering: the 40th anniversary edition is thoroughly recommended.
Read more
5 people found this helpful
Helpful
Report abuse

J. D. Mcelwain
5.0 out of 5 stars Great music that stands on its own
Reviewed in the United States on December 15, 2010
Verified Purchase
This 2 disc set contains terrific music by John Williams that expresses a wide variety of moods and emotions - terror, wonder, suspense, family warmth, and more. Although designed to accompany a television action / drama program, the music stands very ably on its own and is interesting to listen to without the visuals. For those who are not fans of the TV show (but who love music) I recommend checking it out - the composer is John Williams, who scored Star Wars, Harry Potter, Indiana Jones, etc., and this music is of equal caliber. For fans of the TV show, the music will transport them to scenes and stories from the old program, but hearing the soundtrack on its own will enhance appreciation of Williams' music.

The first disc features the soundtrack from early episodes of season 1, while the second disc features music from subsequent seasons of the show. Each has a distinctive sound and is worth listening to, although disc 1 is my favorite. The only disappointment I can cite is that the familiar "jet pack music" from season 1 was missing from this collection - a flute-laced melody that accompanied family members as they flew across terrain with the jet pack. Other than that, the collection is a treasury of great music and I highly recommend it!

A reader
3.0 out of 5 stars Good for Collectors; Cheesy Packaging
Reviewed in the United States on April 12, 2007
Verified Purchase
If you want to time-trip to the LIS episodes via the music and the cues, here you go. LIS was prime escapist television from the bountiful fount of Irwin Allen, and like its stable mate, Voyage To The Bottom of The Sea, featured trite, geared-to-kiddies plots and low-budget special effects.

The packaging for such an expensive two disk "limited edition" is a shame. The flimsy swing-out jewel box fell apart in my hands as I openred it. I had to replace it with an old two-disk stacker type I had left over from old software.
Read more
Helpful
Report abuse

Peter Horne
4.0 out of 5 stars So much wonderful music in this, but also so much rubbish...
Reviewed in the United States on May 17, 2014
Verified Purchase
I loved a lot of the music in this, but why did they choose all meaningless, horrible garbage like the cowboy/western/hippy stuff instead of all the other music, eg Cave of Wizards background music??? There is so much that I would have loved to hear again ... a truly lost opportunity. How about putting out a CD of ALL of LIS's incidental/background music, e.g. the great background music when they explored their first "blob-filled" alien spaceship? That music is SO wonderful and I would be prepared to pay a hundred dollars to have a disk containing all of the LIS music...
Read more
2 people found this helpful
Helpful
Report abuse

Aussie
5.0 out of 5 stars Trip down memory lane
Reviewed in the United States on April 25, 2008
Verified Purchase
Like many my age (early forties) and some in their fifties, I grew up in primary school and early secondary school watching 'Lost In Space' and other Irwin Allen programs. Incidentally, Australia is one of the few places where Lost In Space was more popular than it's then rival 'Star Trek' during the sixties and seventies.
After the comprehensive 'let down' of the Lost In Space Movie back in 97/98, this disc was a welcome trip down memory lane for those of my generation who realise now that the music was not good because of Irwin Allen but because it forms some of the earliest and best work of Hollywood Legend 'John Williams' - referred to in Lost In Space as 'Johnny Williams' aka - Star Wars, Raiders of the Lost Ark, Missouri Breaks, etc.
Recommended for anyone who lived this show during it's initial and second or third airings.
Read more
2 people found this helpful
Helpful
Report abuse

Keith Lecester
5.0 out of 5 stars Classic soundtracks of a great show
Reviewed in the United States on March 12, 2007
Verified Purchase
It's classic T.V. show with music is unforgetable soundtracks, any fan of the show must get it well worth the money, only 5000 made, so get it now......
Read more
2 people found this helpful
Helpful
Report abuse