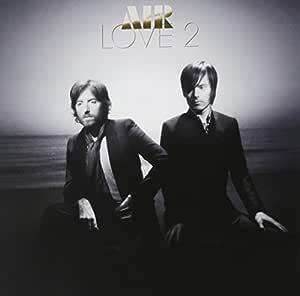 2009 release from the French Electronic duo. With such an impressive body of work behind them, the band is now free to write and record as the inspiration takes them and able to draw on their very own musical lexicon honed over 12 years of active duty and an enviable collection of vintage synthesizers, guitars, and assorted gadgets that grace Atlas, their very own state-of-the-art recording studio nestled in the leafy backstreets of northern Paris. Love 2 is the group's fifth studio album and, whilst being instantly recognisable as an Air record, sees the band exploring some new territories with the help of of L.A.-based drummer/percussionist Joey Waronker.

4.2 out of 5 stars
4.2 out of 5
50 global ratings
How are ratings calculated?
To calculate the overall star rating and percentage breakdown by star, we don’t use a simple average. Instead, our system considers things like how recent a review is and if the reviewer bought the item on Amazon. It also analyzes reviews to verify trustworthiness.
Top reviews

Uncle E
5.0 out of 5 stars Oh, Come On.
Reviewed in the United States on June 29, 2013
Verified Purchase
You all have to stop comparing every new Air Release to Moon Safari. Take this on its own merits and you will discover that it is indeed a beautifully crafted album full of great, catchy tunes and has a better overall cohesion of sound than that admitted classic.
Read more
3 people found this helpful
Helpful
Comment Report abuse

B. Brady
4.0 out of 5 stars Air is back to its roots
Reviewed in the United States on November 15, 2009
Verified Purchase
Having been a fan since Moon Safari and its nearly perfect songs, I moved on to Talkie Walkie, a very good complement to above CD. Premiers Symptomes, especially the opening tracks Modular Mix and Casanova 70 is such a mellow groove, psychedelia and slow jazz saxophone mixed into such a nice blend. I was disappointed with Pocket Symphony, not really taken by the change in direction, although the final track Night Sight is vintage Air bliss. With the release of this CD, Love 2, I was very pleased by the return of Air to its soothing, experimental, joyous and mellow selection of fine tunes. I found the tracks Be a Bee, Heaven's Light, and You Can Tell it to Everybody to be my personal favorites, and the song So Light is Her Footfall could easily have been a ballad from the 1960s. Vive La France!
Read more
Helpful
Comment Report abuse

Eric Hester
3.0 out of 5 stars Music is good tho.
Reviewed in the United States on April 18, 2017
Verified Purchase
Uses OpenDisc technology which is more trouble that it is worth. I just wanted a cd to play not a multimedia disc that I have to create an account for. Music is good tho.
Read more
Helpful
Comment Report abuse

Dacoop11
3.0 out of 5 stars Classic Air, if slightly less inspired
Reviewed in the United States on January 9, 2010
Verified Purchase
If you love Air, this CD will not disappoint. It has all the productions and writing elements you know and love. It's just a bit less inspired than previous effort, sounding a bit like a part II of their prior CD. Having listened to it several times, it has grown on me.
Read more
One person found this helpful
Helpful
Comment Report abuse

manuel savage
5.0 out of 5 stars Chamber music, eletronic music ,AIR at there best.
Reviewed in the United States on August 9, 2013
Verified Purchase
i keep it in my favorite stack of CDs. There is really a iot of music in this one, and thay are all great. i never skip any of these songs when iplay it.
Read more
One person found this helpful
Helpful
Comment Report abuse

Groove Agent 311
4.0 out of 5 stars Fresh Air
Reviewed in the United States on October 7, 2009
Verified Purchase
Air, or the 'French-Electronic Beatles' as I describe them to friends who are unfamiliar with their music, have added yet another gem to their catalog.
'Love 2' is a fresh, smooth listen from start to finish. Upbeat at times, but chilling as well. Classic Air, but while dark at times, this album left me feeling more positive and relaxed than say 'Pocket Symphony'. It's more of a throwback in feel, but with the modernity of their recent productions. Their live instrumentation does well to liven up the mix, and blended with their talent level as producers, this offering should play well to their fan base, and to those looking to escape to an electronic daydream.

igloo
4.0 out of 5 stars A well recorded and mastered CD
Reviewed in the United Kingdom on June 8, 2019
Verified Purchase
I have not set out to write reviews of the music content as “beauty is in the ears of the listener”. These reviews are about the quality (or not) of the recorded sound. To read about how the reviews are done please see my profile.

From the outset it is very sharp, clear and detailed. Drums in particular have a good controlled “thud”.
There is good balance with each instrument clearly defined and audible. The channel separation is sharp. The recording is crystal clear being neither flat nor compressed. A feeling of spaciousness is captured tremendous dynamic range.

Guitars and piano sounds are crisp and clean. The recording has a broad dynamic soundscape from bass to treble. The upper frequencies sparkle without being overly bright.

A well recorded and mastered CD which is warm and detailed without being cold and brittle.

Gladstone
5.0 out of 5 stars Five Stars
Reviewed in the United Kingdom on May 12, 2018
Verified Purchase
love it
Read more
Report abuse