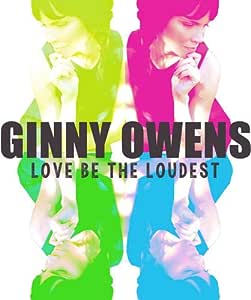 Love Be The Loudest

Ginny Owens Format: Audio CD
4.8 out of 5 stars 13 ratings
See all 2 formats and editions Hide other formats and editions
Includes FREE MP3 version of this album.&nbspProvided by Amazon Digital Services LLC. Terms and Conditions. Does not apply to gift orders.&nbspComplete your purchase to save the MP3 version to your music library.
Available at a lower price from other sellers that may not offer free Prime shipping.

2016 release from the contemporary Christian singer/songwriter. Love Be The Loudest moves into new musical territory, combining Owens' signature thoughtfully-crafted lyrics with pop and electronic dance music. "I'm a pop music junkie," she admits, "so it's fun getting to embrace those sounds. I can't believe I haven't jumped into that space before now." Although experimenting with drum samples and different sound palettes was exciting, she admits lyrics presented much more of a challenge. "The more up-tempo and the tighter a rhythm pattern is, the harder it is to fit words in," she shares. "Trying to say something real and true and deep in the space of a pop song is hard, but definitely worth the effort. Each of the songs feels loaded with thoughts and heart I want to express."

Rachel Lulich
5.0 out of 5 stars Her Best Work to Date
Reviewed in the United States on December 2, 2016
Verified Purchase
If you're not a Ginny Owens fan yet, you are about to be. This new album is fabulous, and I'm not even a pop fan. It's so good, I'm going track-by-track:
1. God is Love (Intro) - Usually, I don't understand the point of having short little intro tracks, but this one makes sense. The final song on the album is the full version, so they create bookends, setting up and summarizing the rest of the record. The title of these two tracks is the ultimate theme of the entire album.
2. Coming Alive - Engaging. It came up in a random playlist today and immediately caught my attention before I even recognized what it was.
3. The Loudest Voice - The title track, this one is uptempo and upbeat and extremely pop. I feel like I hear some Taylor Swift 1989 influence in some of the production. Lyrically a message we all need to hear and apply.
4. Love Looks Beautiful - I love this one. That opening verse is esp good, and I'm grateful for a bridge that further elucidates the chorus. Nice guest vocals.
NOTE: All the guest vocals on this record are very tastefully done. Guest vocals usually drive me nuts, but they're integrated so well on this album.
5. The Way God Sees - I like this one more every time I listen to it. Wonderful lyrics, and great music.
NOTE: There are a few songs on this album with a "darker" musical sound: Tracks 4, 5, 10 and 11. This kind of sound is very rare in Christian music, and I absolutely love it.
6. Fearless - Wow. The chorus on this song has some serious energy to it. I feel like I should be running when it kicks in.
7. The Fire - There are no words. But I'll try. Both the lyrics and music in this song are beautiful, aching, and healing. Even if you don't buy the album, you should by this treasure.
8. Go Be Light - A bit of an anthem, this one opens with a standout first verse (the second is pretty great, too) and an energetic, engaging chorus.
9. Made for Loving You - A friend dubbed this the "coffee shop song" of the album; it's simple, with just vocals and electric guitar.
10. How Much More - This one is in a similar vein to "Love Looks Beautiful," and I really like it. The chorus has a strong biblical reference that makes more sense to me because of this song.
11. If You Want Me To - A Ginny Owens classic, it's beautiful but was never a personal favorite. It is now. Great new arrangement.
12. Wonderful Wonder - Another remake, I'm not as fond of this one (the original was my favorite GO song until The Fire...now they're tied because I can't make up my mind), but it fits in well with the rest of the album.
13. God Is Love - This is a simple, beautiful re-imagining of an old hymn (or two). I'm not a fan of modern musical meddling, but I give my hearty approval to this one.

I've been a fan for just over a decade, but her last album ("I Know A Secret") marked a shift from her previous work that impressed me; the album felt more cohesive than some of her earlier records, and the lyrics were more consistently good. "Love Be The Loudest" is a similarly well-put-together collection of songs, and the work feels even stronger. There's not a weak song in the bunch. It's absolutely stunning.

R. T.
4.0 out of 5 stars i liked it
Reviewed in the United States on February 7, 2020
Verified Purchase
I saw Ginny on the 700 club and it aroused my interest. I like this cd..... will have to check out her other ones.
Read more
Helpful
Comment Report abuse

Justine Walak
5.0 out of 5 stars Buy it!
Reviewed in the United States on May 5, 2017
Verified Purchase
Great CD. Bought it as a result of a friend's recommendation. Glad I did. Love her voice and her messages.
Read more
Helpful
Comment Report abuse

elise
5.0 out of 5 stars Five Stars
Reviewed in the United States on February 15, 2018
Verified Purchase
I really enjoy her music! No regrets ever with her music!
Read more
Helpful
Comment Report abuse

Amazon Customer
5.0 out of 5 stars Enjoying the Lord even if suffering
Reviewed in the United States on January 4, 2017
Verified Purchase
Always thoughtful, Ginny focuses on the love of God through Jesus the Messiah as we live in this veil of tears.
Read more
Helpful
Comment Report abuse

Biker Babs
5.0 out of 5 stars Great CD
Reviewed in the United States on November 21, 2016
Verified Purchase
Ginny's songs are direct praises from her heart. You can hear it in every line and note. Great CD!
Read more
Helpful
Comment Report abuse

Me and I
5.0 out of 5 stars Five Stars
Reviewed in the United States on December 6, 2016
Verified Purchase
I'm glad Ginny made this album truly loud. Her voice is better than ever.
Read more
Helpful
Comment Report abuse

Timothy Yap
5.0 out of 5 stars Review
Reviewed in the United States on December 4, 2016
Prime Cuts: The Way God Sees (Featuring Mike Weaver), The Fire, God is Love (Featuring All Sons and Daughters)

This is Ginny Owens' loudest, boldest, and the most creative album. Ever since Owens' debut album "Without Condition" in 1999, Owens has had always been known for her signature CCM piano-pop. With radio hits such as "If You Want Me to," "I Am" "Free," and "I Wanna Be Moved," Owens has been awarded a lofty pedestal as some of the genre's greats such as Sara Groves, JJ Heller, and Natalie Grant. For her ninth studio album and her first independent release (released on her own Chick Power Music with the Fuel Music distribution), she has let all scaffolds fall. Instead of being restrained by her usual CCM pop, she has embraced all influences including EDM, folk, and even accapella, Even the number of duet or harmony partners has increased. Never on a Ginny Owens' record have we seen as many as six of her peers singing in duet or in harmony vocals with her.

Arguably the "must-hear" track on this album is "The Fire." Undergirded by an Adele-esque piano based pop, "The Fire" bucks the trend that begs God to deliver us from our trials so that we can be shiny and happy people. Rather, taking Scripture passages (like 1 Peter 4:12, Acts 5:41) to heart, the song gives exposition of how the fires of life can be where we meet God. When Owens sings "There is hope, I am not alone in the fire" you can feel such earnestness in her voice that you can't help but be pulverized. "The Way God Sees" reminds us of Isaiah's exhortation that God's ways are not our ways --- a much needed reminder. Further, the song is so catchy that she actually doesn't really need Big Daddy Weave's Mike Weaver's vocal presence.

"The Loudest Voice" is where Owens incorporates some elongated EDM beats. But fans need not fear: Owens has not migrated to Meghan Trainor land. "The Loudest Voice" is still flourished with Owens' trademark melody and thoughtful lyrics. "Love Looks Beautiful" (featuring Ellie Holcomb) has a shuffling R&B backbeat where Ellie Holcomb's vocal presence (like Weaver's) is immaterial. In fact, the two ladies sound so similar, you can't tell the difference between them. Not sure why, but Owens has decided to re-recorded two of her former hits: "Wonderful Wonder" and "If You Want Me To." Both get a more up-to-date sound with a more 3 dimensional effect that is welcomingly engaging.

The album opens and closes with "God is Love." The ending version which is a tad longer is an ear-opener. Singing accapella with All Sons and Daughters harmonizing, "God is Love" sounds like you are in heaven surrounded by a bevvy of angelic voices heralding in unison the transcendent truth, "God is love." This could be the closest we could ever get to hear heavenly worship on this side of life. Overall, "Love Be the Loudest" finds Owens at her creative best. Each song is unique and carefully crafted and Owens shows she is not confined by style or genre.
Read more
2 people found this helpful
Helpful
Comment Report abuse
See all reviews

Page 1 of 1 Start overPage 1 of 1
This shopping feature will continue to load items when the Enter key is pressed. In order to navigate out of this carousel please use your heading shortcut key to navigate to the next or previous heading.
Back
Next
Pages with related products. See and discover other items: Light Sense Coffee