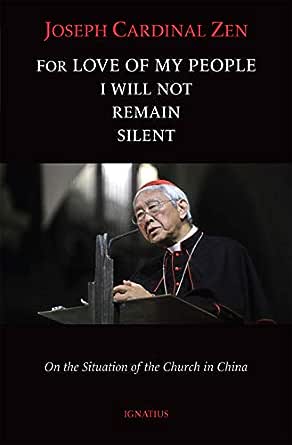 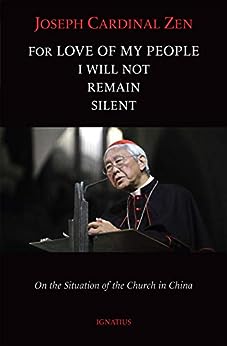 For Love of My People I Will Not Remain Silent: On the Situation of the Church in China Kindle Edition

"Cardinal Joseph Zen is one of the great witnesses of the twenty-first-century Church. His thoughts on the future of Catholicism in China should be taken with the utmost seriousness by anyone who cares about the New Evangelization in the spiritual desert of the world's largest country."
— George Weigel, Author, The Fragility of Order: Catholic Reflections on Turbulent Times

"Reading For Love of My People I Will Not Remain Silent prayerfully is an act of solidarity. We must listen to those who insist on Christ in the midst of totalitarianism, who choose him lovingly and courageously. Thank you, Cardinal Zen, for being a voice for God’s faithful people in China."
— Kathryn Jean Lopez, Senior Fellow, National Review Institute; Editor-at-Large, National Review

"Cardinal Zen's unadorned eloquence reveals a patient silence 'like a lamb before its shearers' (Is 53:7) during many years of suffering. At the same time, as the prophet said, 'For Jerusalem's sake I will not remain quiet' (Is 62:1), so does Cardinal Zen say for China."
— Fr. George Rutler, Author, Calm in Chaos: Catholic Wisdom for Anxious Times

"No one in the twenty-first century has offered better witness to the suffering of these underground Catholics than Cardinal Zen, who urges the Vatican to shun power-politic deals with the Communist state. Let today's papacy follow instead the path of the 'Lamb who appears weak'—the path followed faithfully for so many years by the martyred Church of China."
— David Pinault, Ph.D., Professor of Religious Studies, Santa Clara University; Author, The Crucifix on Mecca's Front Porch

"Cardinal Joseph Zen is a humble, self-effacing prelate. But his principled opposition to the new Sino-Vatican Agreement, which he sees as a betrayal of our suffering co-religionists in China, has vaulted him into the headlines. He has pleaded with Pope Francis not to abandon the Underground Church, which has survived decades of persecution and is now, once again, under siege. To know what is really happening to faithful Catholics in China, and what we should be doing about it, read the testimony of this thoroughly reliable witness."
— Steve Mosher, President, Population Research Institute

Cardinal Joseph Zen, a native of China, served as the sixth Bishop of Hong Kong. He has been outspoken on issues regarding human rights, political freedom, and religious liberty, often attracting criticism from the Communist Party of China.

4.9 out of 5 stars
4.9 out of 5
22 customer ratings
How does Amazon calculate star ratings?
Amazon calculates a product’s star ratings based on a machine learned model instead of a raw data average. The model takes into account factors including the age of a rating, whether the ratings are from verified purchasers, and factors that establish reviewer trustworthiness.
Top reviews

Yvonne Von Innes
5.0 out of 5 stars Eye-opener
Reviewed in the United States on March 18, 2019
Verified Purchase
Very informative book on the situation of our Catholic brethren. As a consumer society, we can be very oblivious.
I am very concerned that the Sacraments may become corrupted. Thank God that there are other means of establishing a relationship with God. Chinese Catholics are in my prayers. God give them the courage to preserve in these times.
Read more
12 people found this helpful
Helpful
Comment Report abuse

St. Joe's amigo
5.0 out of 5 stars You can hear this saintly cardinal's heart bleeding for his people through the pages
Reviewed in the United States on April 12, 2019
Verified Purchase
It doesn't have a narrative but its informative. This is the discourse of a true shepherd of Jesus Christ in service to his flock.
Read more
11 people found this helpful
Helpful
Comment Report abuse

Lucinda
5.0 out of 5 stars Great book for those seeking TRUTH
Reviewed in the United States on July 22, 2020
Verified Purchase
Such a powerful book filled with truths, heartache, & suffering of a wonderful people who are being persecuted for their faith. It dispels the fact that the communists allow the Church to remain open. Everything the communists do is a “front”, nothing is as they make it appear to be! God bless this dear, holy man for having the courage to write and publish this book.
Read more
Helpful
Comment Report abuse

Charles M. Fischer Jr.
3.0 out of 5 stars Informal Testimony of Card. Zen
Reviewed in the United States on February 28, 2020
Verified Purchase
I liked the information that Card. Zen reveals about the Holy See’s relationship with the Chinese Communist Party. However there are so many intricacies to that relationship and how it plays out in the Chinese Church both official and underground that a more formal account would be better suited to the author’s purpose, namely to reveal the dangers and nuances of dealing with the Chinese Communist Party.
Read more
One person found this helpful
Helpful
Comment Report abuse

Joyce Colella
5.0 out of 5 stars Up to date info of what is really going on. Friend enjoyed
Reviewed in the United States on June 9, 2019
Verified Purchase
Gift for friend. Enjoyed teading
Read more
2 people found this helpful
Helpful
Comment Report abuse

Kenneth W Zimmerman Jr.
5.0 out of 5 stars Read This Booklet of Lectures to Understand the Catholic Church in China
Reviewed in the United States on July 12, 2020
Verified Purchase
Cardinal Zen outlines the past and current challenges facing the Catholic Church in China in a series of easy to understand lectures.
Read more
Helpful
Comment Report abuse

Belfast Barbara
5.0 out of 5 stars Real Catholicism in real China
Reviewed in the United Kingdom on August 7, 2019
Verified Purchase
I read this book to appreciate the position of traditional Catholics in China, in the context of the pact with the Vatican.
Read more
Helpful
Sending feedback...
Thank you for your feedback.
Sorry, we failed to record your vote. Please try again
Report abuse