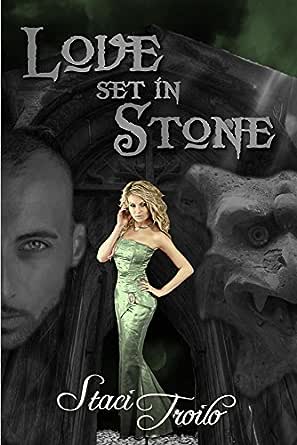 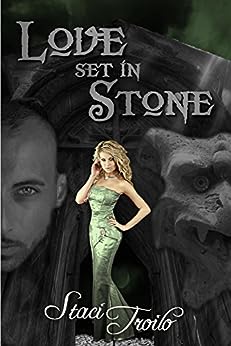 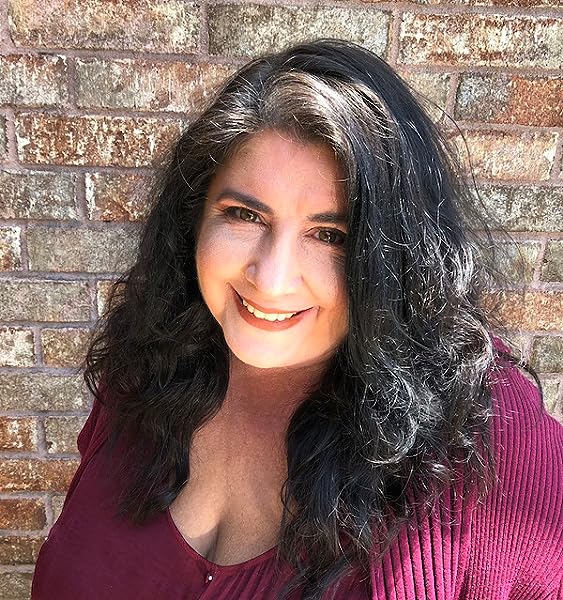 Mae Clair
5.0 out of 5 stars Fabulous characters and a great story!
Reviewed in the United States on April 20, 2016
Verified Purchase
A paranormal romance, LOVE SET IN STONE has far more than a gargoyle and a human woman at its heart. It’s also a story of relationships, friendships, regrets, and even a bit of detective fiction. Damien is an ancient warrior who fought on the battlefields of France centuries ago. Due to a pact he made with the angel Anael, he now spends life as a gargoyle—stone during the day, only able to obtain his human form at night.

Life changes abruptly when he saves Katarina (Rina) Whitman from a violent attack. After centuries of waiting for a woman to be his soul mate, he realizes she is the one. But how to explain that the man she sees at night is actually a creature of stone during the day?

The author handles the romantic elements of the book wonderfully, making it easy to be swept up in the emotions of the characters. Both leads are extremely likable and their passion sizzles. Damien is a bit on the dark, brooding side, exactly as I would expect a gargoyle to be--especially one who has seen the horrors of war. I couldn’t wait for the “reveal” moment, and it did not disappoint.

In addition, there are several secondary characters who deserve their own stories. I’m hoping to see more of Detective Urbani, Gretchen, and especially, the angel Anael. It’s rare when I find a book with so many engaging characters, but LOVE SET IN STONE is rife with them—along with romance and danger. The ending is wholly satisfying, yet I could easily see this developing into a fabulous series. I already miss these characters and would love to see more of them!
Read more
Helpful
Comment Report abuse

K. Elizabeth Lane
4.0 out of 5 stars Riveting supernatural romance - a must read!
Reviewed in the United States on June 20, 2016
Verified Purchase
What an amazing tale of love against the supernatural odds - the author did a fantastic job of crafting a wonderful romance that was clearly hindered by the supernatural as well as PTSD. I love how the symptoms and obstacles were not spoon fed to us, but rather subtly contained in the context of the story. She really captured the feeling of the monster within without having it as a central focus. The characters were well written and easy to connect to and it had just enough supernatural touches and pushes to rivet you to each page with a completely unexpected plot twist.
Read more
One person found this helpful
Helpful
Comment Report abuse

Irene Aprile
4.0 out of 5 stars All the right ingredients for a paranormal romance
Reviewed in the United States on May 27, 2016
I usually avoid novels that includes angels, demons, pacts with God and this sort of things, but Staci Troilo surprised me with this story in various ways.
Moving in the fantasy realm, the reader is bound to meet more vampires and werewolves than he can stand, so I was pleasantly surprised when I discovered that the main male character is nonother than a gargoyle (or maybe we should say a grotesque), frustrated by a long life of seemingly useless conversations with his protector. When he gets involved with a girl by saving her from an attack, the story kicks off at fast speed, grabs the reader's attention, and doesn't leave it till the end.
Intense action, a little intrigue, a lot of love (sweet love, hot love, very hot love) all plays together in a dark and gloomy Pittsburgh to create a pleasurable reading that's going to leave you wanting for more.
I would like to know more of some of the minor characters, such as Detective Urbani, and to know what happens to the main characters after they... but I won't tell you nothing more!

Note: I received an ARC copy of this book
Read more
One person found this helpful
Helpful
Comment Report abuse

Book Addict
5.0 out of 5 stars Superb read
Reviewed in the United States on June 25, 2016
Staci Troilo's Love Set in Stone kept me riveted until the end. I'm new to paranormal romance so reading a story about gargoyles gave me a wonderful introduction to the genre. There's passion, heat, romance, and worlds that are beyond our normal everyday experience. It's a great way to escape into fantasy that shows above all else love conquers everything, even evil gargoyles. Plus I loved the setting of Pittsburgh and the overview given from above and below in the rivers. I have read other novels by Ms. Troilo, and I very much admire her ability to write in a multitude of genres.
Read more
One person found this helpful
Helpful
Comment Report abuse

Shelly M
5.0 out of 5 stars A totally different read. Enjoyed it a lot.
Reviewed in the United States on June 21, 2016
This was the first book I have read by Staci Troilo and I will be looking for more from her. I really liked that the book is totally unlike anything I have read before and it was refreshing. The story was well written and I enjoyed reading it a lot. The characters were really interesting and I love the unexpected twist at the end. I would love to see stories from the other characters especially Gretchen and her new upcoming love life.
Read more
One person found this helpful
Helpful
Comment Report abuse

sarahh89
5.0 out of 5 stars I loved this story!
Reviewed in the United States on June 19, 2016
I received a copy of this book in exchange for an honest review.
This is the first story I have ever read by Staci Troilo.....it won't be the last!
I really enjoyed this book from the beginning to the totally unexpected twist at the end.
Read more
One person found this helpful
Helpful
Comment Report abuse

Abby
4.0 out of 5 stars Complete and Wonderful Surprise!
Reviewed in the United States on August 21, 2016
This book was a true diamond in the rough.
It hits everything from sexual relationships, to dealing with past hardships.
When I picked up this book I really didn't expect much, but what I found just blew me away.
And if you love twists, you will adore the ending of this book!
Good Read.
Read more
Helpful
Comment Report abuse
See all reviews

Janet Gogerty
4.0 out of 5 stars I shall look up at gargoyles with more respect in future.
Reviewed in the United Kingdom on January 19, 2018
Verified Purchase
I was very intrigued by the storyline of this novel. The age old tale; you're looking for Mr. Right and isn't it always the way, you meet him and he turns out to be a stone gargoyle. To be pedantic, Damien is a grotesque as he is not a waterspout; many centuries ago he was a brave knight and when he comes to life at night he is pretty warm blooded. But how can such a love affair work? I got as confused as Damien as to how the 'rules' set out by his guardian angel worked; he was certainly up against it with the villains on the ground endangering the heroine and a fallen angel tricking everyone. The ending came as a shock, but this is literally a fantastic sexy thriller.
Read more
One person found this helpful
Report abuse
See all reviews