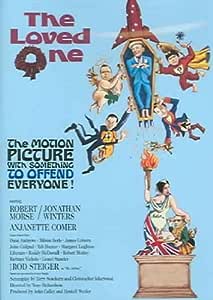 The funeral business gets a giant raspberry in this wickedly wacky, resplendently ridiculous farce based on Evelyn Waugh's macabre comic masterpiece and directed with inspired verve by Tony Richardson (Tom Jones). But the American way of death isn't the film's only target: sex, greed, religion and mother love are also in the crosshairs of its satirical shots. Robert Morse plays a bemused would-be poet who gets entangled with an unctuous cemetery entrepreneur (Jonathan Winters), a mom-obsessed mortician (Rod Steiger) and other bizarre characters played by such adept farceurs as John Gielgud, Robert Morley, Tab Hunter, Milton Berle, James Coburn and Liberace. If The Loved One doesn't make you laugh, call the undertaker!

In olden days, as Cole Porter famously observed, a mere glimpse of stocking was looked on as something shocking. So it's heartening to report that this 1965 black comedy still delivers on its billing as "the motion picture with something to offend everyone." Tony Richardson, fresh off the liberating Tom Jones, brings Evelyn Waugh's self-described "little nightmare" to the screen with all its sacrilegious shocks (and then some!) intact, courtesy of screenwriters Terry Southern (Dr. Strangelove) and Christopher Isherwood. Robert Morse stars as Dennis Barlow, an Englishman abroad and a fish out of water in Southern California. Stumbling across the Hollywood landscape like a cross between Candide and Jerry Lewis. Barlow gets a unique perspective of the American experience when he finds employment at the Happier Hunting Ground, a ramshackle pet cemetery, and the flipside of the fabulously vulgar Whispering Glades. In a virtuoso dual role, Jonathan Winters costars as glad-handing Happier Hunting Grounds proprietor Harry, whose brother, Whispering Glades' Blessed Reverend, has some out-of-this-world plans for the "Loved Ones." The mad, mad, mad mad cast also includes John Gielgud as Dennis's ill-fated expatriate uncle, an artist unceremoniously booted from the movie studio where he has worked for 31 years; Anjanette Comer as Aimee, a Whispering Glades cosmetician torn between Dennis and embalmer Mr. Joyboy (an unforgettable Rod Steiger), who registers his broken heart on the faces of his corpses; a teenage Paul Williams as a science prodigy; Liberace as a funeral salesman peddling eternal flames both "perpetual or standard"; Milton Berle and Margaret Leighton as "a typical well-adjusted American couple" whose deceased dog puts a crimp in their dinner plans; and even Jamie Farr, seen fleetingly as a waiter. The Loved One anticipates the "New Hollywood" with its naturalistic cinematography by Haskell Wexler (Medium Cool) and "anything goes" sensibility (the dinner scene with Joyboy and his obese mother would not be out of place in a John Waters movie). By turns creepy and grotesquely funny, The Loved One will bury you. --Donald Liebenson

Page 1 of 1 Start overPage 1 of 1
This shopping feature will continue to load items when the Enter key is pressed. In order to navigate out of this carousel please use your heading shortcut key to navigate to the next or previous heading.
Back
Next
Pages with related products. See and discover other items: james coburn, dana andrews, roddy mcdowall