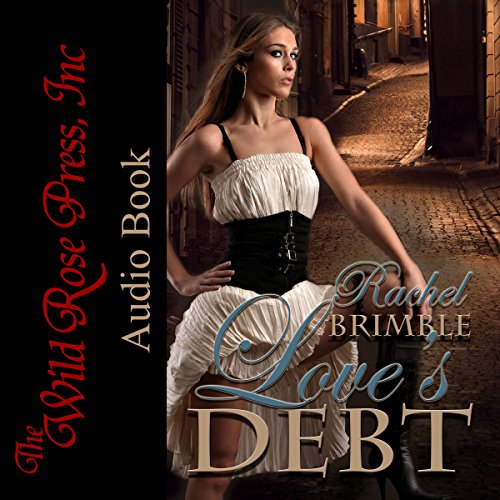 List Price: $6.95
You Save: $1.00 (14%)
By completing your purchase, you agree to Audible’s Conditions Of Use
Sold and delivered by Audible, an Amazon company
Share

Maria D.
4.0 out of 5 stars What Would You Be Willing To Do For The Man You Love?
Reviewed in the United States on September 26, 2012
I received a complimentary copy of this book as a part of a book tour in exchange for my honest and fair review

What would you be willing to do for the man you loved? In Rachel Brimble's Love's Debt, that is the question the heroine must ask herself - can she let go of the worry and hardships she has endured in order to share some of the money she's been able to save towards her future in order to help the man she loves.
Set in Bristol, England during the 1890's, this is the tale of a working class woman who falls for a man who's down on his luck. With likable characters, good dialogue and a well paced plot, Ms. Brimble's story made me think about the things I take for granted.

Milly Shepherd is a twenty five year old working class woman working in The Red Lion, a local tavern. Determined to make a better life for herself, her mother and her younger sister, Milly is hoping to become the manager of the bar - the job's hers as long as no able bodied man comes in and takes it away from her. With only one hour to go before the decision is made, a young able bodied man comes in to apply for the job. Milly is determined to fight for the job she considers rightfully hers; she just didn't plan on falling for the man who would end up becoming one of her employees.

Joseph Jacobs is a young man caught between a rock and a hard place. Broke and desperate for a second job to cover his father's gambling debts, Joseph applies for the managers job at The Red Lion Tavern. Surprised when he doesn't get the job, he's willing to put his pride aside and work for the woman the owner sees as a member of his family. He never planned on falling for the fiery redhead or on needing her help with his father.

The scenes between Milly and Joseph are well written and they are both likable characters. Both of them want to better their situation in life, Milly has always been poor and wants to make sure her mother and sister are able to live a decent life, while Joseph is just trying to keep his father out of the debtor's prison and hopefully be able to scratch out a decent future for himself. Ms. Brimble did a good job developing these characters and working with their emotional and financial baggage. They really were well suited for each other.

When Joseph's father gets in more trouble, will Milly be willing to help Joseph obtain his freedom? And will Joseph be willing to put his personal pride aside and accept Milly's help? You'll have to read Love's Debt to find out. I enjoyed this quick, short, historical romance and I think you will too.
Read more
3 people found this helpful
Helpful
Report abuse

J. Faltys
4.0 out of 5 stars Sweetly Sensual Historical Short Story
Reviewed in the United States on September 29, 2012
Love's Debt is a sweet historical featuring two people drawn together in their desperation to make ends meet and make something of their futures. Considering the shortness of this story, the main characters are surprisingly well fleshed-out and though they come from different societal spheres they're perfect for each other.

Milly is a strong woman who wants the best for her family and has gone where no woman has gone before and become manager of a pub. When she first sees the sexy and formidable Joseph Jacobs she thinks he'll steal her job. She also knows there's more to him than what she sees and sets out to discover the truth about him. As she gets to know him she discovers his kind heart and loyalty to family, traits she also has and what draws them together. Milly's extremely likable and stands up for what she believes in. She's scared to open her heart, but once she does it's done wholeheartedly. The feelings she has for Joseph are believable and evolve slowly and naturally to a satisfyingly sweet conclusion.

Joseph is in a constant struggle to make ends meet and pay off his father's gambling debt. His mother left when she realized the gambling wasn't going to stop but Joseph is loyal even through his disappointment and works two jobs to pay off the debt. He's an admirable character and the subtle flirtatiousness he directs towards Millie from the start is endearingly sweet and believably evolves into something stronger. He's also a smart man who doesn't let his pride get in the way off his happiness and leans on the woman who loves him when he needs her most.

The main characters are nicely fleshed-out with truly likable traits. The interaction between father and son was heartbreakingly well-written and showed a great deal about Joseph. My only disappointment was in how little insight we got into the father and whether there's hope for him to overcome his addiction. While the story ends on a hopeful note there's a niggling suspicion about hopefulness for the father that I wish I could've been assured of. The romance is sweet and the lone sexual encounter isn't graphic at all but is certainly satisfying. Between the enjoyable writing style and likable main characters this is a book I recommend to anyone wanting a feel-good story. This is my first time reading Ms. Brimble but definitely won't be my last!
Read more
3 people found this helpful
Helpful
Report abuse

Ruth A. Hill
4.0 out of 5 stars Short and Sweet Historical
Reviewed in the United States on December 23, 2013
This is a nice short and sweet historical romance, and it's a nice way to spend a cozy, fall evening. The characters, story, and setting are sweet, and I loved almost everything about ths book. I could have done without the brief profanity and sex scene, but thankfully both were short! I love strong women, and Milly is definitely that. And Joseph is the typical Victorian gentleman who is down on his luck. Although the story was short and developed faster than I might have liked, it was nice. I would love to read more from this author.

I always find Victorian England a nice escape in ths day and age. While I know that illicit actions were still a part of the culture, they were veiled. And morals were still alive back then. In fact, I loved Milly's response as things blossomed between Milly and Joseph. And I'm glad to know that marriage is expected--much nicer than just living together! While the end is expected (no spoilers, but I bet you can guess the ending), it is still nice!

I was sent a copy of this book in exchange for my honest review. I was not financially compensated, and all opinions are 100 percent mine.
Read more
One person found this helpful
Helpful
Report abuse

Clare Roden (Clare & Lou's Mad About Books)
5.0 out of 5 stars Great little story, must read!
Reviewed in the United States on November 5, 2015
Rachel Brimble never fails to take you on a journey into the distant past and puts you in the position of her characters, making you feel all of their raw emotions the pain and passion that her characters go through. Loved this little story of Milly a hard working woman making her way in the world when times were hard for a woman to have a job thought of as a man's only job. Learning to love and trust that Joseph wont take everything away from her if she gives him her heart mind body and soul. Great read as as always, love all that Rachel writes!
Read more
2 people found this helpful
Helpful
Report abuse
See all reviews

Read-Write-Live
5.0 out of 5 stars Love's Debt
Reviewed in the United Kingdom on March 7, 2013
Verified Purchase
Love's Debt
Sensual, sweet and a real page turner - plus total value for money! This lovely tale features a strong yet vulnerable heroine and a gorgeous, strong yet sensitive hero. It was addictive reading and I devoured it one Saturday afternoon and I recommend that you do the same! Milly is the kind of heroine you want to be: determined, diligent and generous and Joseph is the dream man: devoted to his wayward father but prepared to put even him aside for the woman he loves. The tension that builds from the moment they meet is delicious and the love scene is deeply sensual. I definitely believed by the end that these two would...SPOILER ALERT...live happily ever after.
My favourite image had to be: "...a smile as powerful as breaking dawn..." What more can I say?!
Looking forward to reading more by Rachel Brimble!
Read more
One person found this helpful
Report abuse
See all reviews
Back to top
Get to Know Us
Make Money with Us
Amazon Payment Products
Let Us Help You
EnglishChoose a language for shopping. United StatesChoose a country/region for shopping.
© 1996-2021, Amazon.com, Inc. or its affiliates