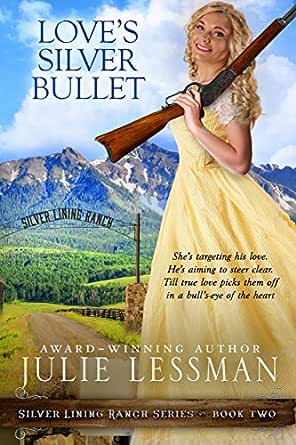 You've subscribed to Silver Lining Ranch Series! We will preorder your items within 24 hours of when they become available. When new books are released, we'll charge your default payment method for the lowest price available during the pre-order period.
Update your device or payment method, cancel individual pre-orders or your subscription at
Your Memberships & Subscriptions
There was an error. We were unable to process your subscription due to an error. Please refresh and try again. 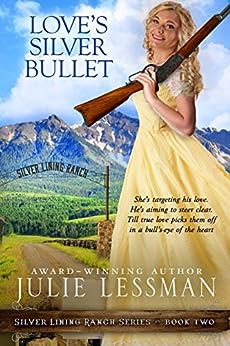 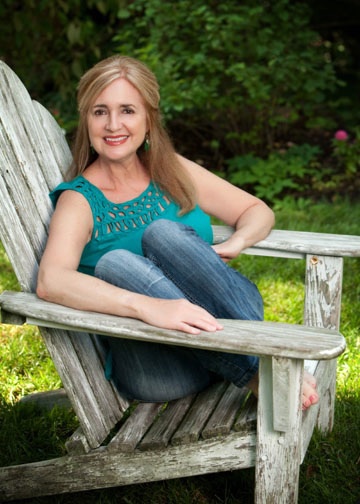 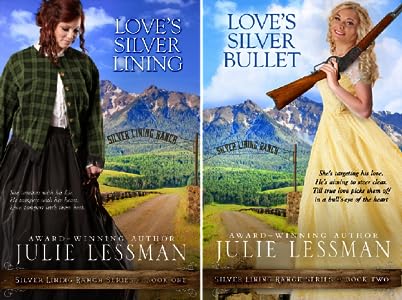 Stephanie McCallTop Contributor: Harry Potter
5.0 out of 5 stars Julie Nails the Bulls-Eye Once Again!
Reviewed in the United States on June 4, 2020
Verified Purchase
Love's Silver Bullet...wow! I had just about given up hope that the Silver Lining Ranch series would ever see another book, but it did. And what a book it is! I'm a sucker for romances wherein the main couple is friends first, or has loved each other since they were little kids. Therefore, that opening "wedding" scene between young Jake and little Sheridan had me hooked from the first sentence. Jake was an absolute sweetheart then, and he grew into a man whom--well, let's just say I understand why Sheridan adored him.

As for Sheridan Marie Donovan herself, she too was a pleasure to spend more time with. I love the way Julie mixed compassion and boldness in her personality. That's not to say extroverted or bold heroines can't be compassionate, but I don't often see what I'll call a perfectly even split. The kind of heroine who can kiss a man senseless and shoot a gun one minute, and tutor orphan kids or soothe that man's pain away the next, is a beautifully developed heroine. Sheridan also fits great into the 1880s Western landscape, the kind of woman I think of when I think "rancher's daughter/niece." Her Vassar education was just icing on the cake.

Speaking of the landscape, Julie's setting details here are some of her best. Every locale from the Silver Lining Ranch to the Wild West Show to Aunt Marie's New York mansion felt authentic. As in, these were not Hollywood sets. These were places that, were time travel a thing, I felt like I could visit and say, "Oh, hello, everyone. Yes, I would like some tea--and yes, I realize my 2020 capris are scandalous, so would you happen to have a nice dress handy--or one of Sophia's peasant blouses?" I especially loved spending time with the McShanes and Donovans at family game night. Blaze and Dash better be glad Trivial Pursuit wasn't invented yet, that's all I can say--and as for charades, those guys wouldn't have stood a chance.

The secondary characters, too, were one of my favorite parts of Love's Silver Bullet. I adored Shaylee and can't wait for her to have her own book. That little dickens struck me as the kind of brilliant tomboy the world better watch out for, especially considering she keeps and pampers tarantulas! (Which, by the way, was absolutely PRICELESS). I also loved Grace and Grayson, and even Aunt Marie's lady friends (yes, including Miss Rhiannon Frankenstein). I'm honored that Julie chose me to name a character after--and a professor from Vassar, no less!

More on the secondary characters--it was great seeing a lot of them, especially Libby, again. I cheered for Libby and Maggie's efforts toward women's rights and the SLIP--I'd have been in there with both feet. In particular, I applaud Julie for the way Libby handled Finn toward the end, and how, through prayer and persistence, Sheridan was able to handle him, too. In their era, in and out of Christian homes, men were expected to have absolute control. As Libby and others admit, Finn, Blaze, and other men can be bullheaded about that, and as I've said in other reviews, sometimes that comes off not as well as it should. But here, Julie did a good job of balancing things out so that I understood where Finn was coming from and wanted him to be at peace--without Sheridan losing her freedom. And I could sympathize with Finn because, while he went to extremes and shamelessly manipulated, he never made Sheridan feel like less of a person that I could see.

Speaking of peace, freedom, and the like, the spiritual thread here is wonderful, particularly when it comes to Jake. If you read Julie's author's note, you'll find a certain addition to his past came at the eleventh hour, but it worked great. In fact, kudos to Julie not only for delving into abnormal psychology, which most Christian authors won't do, but putting it in a historical novel and making it authentic. Kudos as well for not lingering on the darkness of Jake's past, but giving me just enough that I knew exactly why he felt as he did about Sheridan. My heart broke for them both, but rejoiced because Sheridan--and God--refused to give up on Jake or love. After all, He doesn't give up on us, and I was convicted to remember, no Christian should behave as though His death were in vain, as though ours were the only lives He could not redeem.

Overall, Julie has done a bang-up job, from the little clover ring to the fitting silver bullet necklace at the end. I can't wait for the next Silver Lining installment--starring Shaylee, I hope--and even more books from her. And even though she doesn't pick the same winner twice--maybe she'll *base* a character on me again sometime? Perhaps a spitfire nun named sister Mary Monica? ;) Anyway, read it--I know you'll love it!
Read more
Helpful
Comment Report abuse

My Favorite Pastime
5.0 out of 5 stars love's silver bullet
Reviewed in the United States on May 31, 2020
Verified Purchase
My Review:

Holy frog spit y'all! Julie Lessman the "Caffeinated Drama Queen/Kissing Queen can write a great western! I have been waiting for Sheridan and Jake's story and it definitely did not disappoint! From the beginning I felt that Jake and Sheridan belonged together. Sparks still fly between Libby and Finn which is always entertaining. And Blaze has learned well from his uncle Finn so he and Maggie have their moments as well. With Finn having a promise to keep to his dead sister, he enlists the help of Blaze, Dash and Jake to keep all men away from Sheridan. Which makes it very interesting when men start showing an interest in her! There are a lot of twists and turns to get to the HEA that I crave in a book, but it was well worth waiting for. I ranted, I raved, I was tempted to throw my Kindle, but in the end I sighed with contentment that all ended well for the characters that I had come to care for as if they were real!

"Because as human beings, professed Christians don't always live up to the ideals of Jesus because we are fallible"--a twinkle lit in her eyes--"but the Word of God is not. So, if you want to truly know how to be a Christian, it's best to learn at the feet of the Master through His Word, not actions of professed Christians, which don't line up with the Bible." I love love love the spiritual lessons that the author imparts in her writing, and I love this reminder that our eyes need to be fixed on Jesus and not others.

"Marriage is a partnership, not a dictatorship." Maggie actually said this when talking with Sheridan, but it is Libby's fondest quote and I loved it!

"I see." Clay slapped his hat on with a tad of temper. "Well, pardon me, sir, but one would think a young woman soon to be nineteen who is going off to college would be old enough to decide for herself."
Hip cocked, Finn gave a slow nod as he perched hands loosely on his thighs. "One would think that I suppose, Clay, if one were a young man looking toward his own interests rather than that of a young woman's. But as the guardian of that young woman, not only do I think I know what's best for her"--Finn pinned him with an unflinching stare--"but i also have the power to insure it. Thank you again for a wonderful evening, and I bid you good night," he said with a polite doff of his hat, smile compressed as he mounted his phaeton.
And if I have my way--goodbye."This scene is a bit long for a "quote" section, but I just loved it. Because it showed that Finn wasn't just overbearing, but he very much cared for Sheridan and had only her best interests at heart and he knew how to deal with dandy's that came along to swoop away the innocence of a young woman.

"Her mind traveled back to the kisses Jake had given her the night before she'd returned to school, and for the first time in almost five months, she was shocked to realize she didn't want that to be her focus anymore..." "But months of soul-and Bible-searching had convinced her getting to know God was more wonderful, bringing things into true perspective."Once again I appreciate the spiritual moments that the author brings to her writing. I loved to see that Sheridan started maturing from a young girl only interested in romance to a woman of faith ready to let the Savior direct her path and thoughts.

"I love him, Grace," she whispered with a sudden sheen of tears, "as sure as the buds on those trees bursting into spring, but I've come to realize that the cost of love is steep." A lump bobbed in her throat as she expelled a shaky sigh. "Because it means putting it before self." Once again I loved Sheridan's maturity in her faith and even being able to put her love for Jake above her own desires.

An excellent and entertaining story from a wonderful author. I highly recommend you check out the prequel FOR LOVE OF LIBERTY and book one LOVE'S SILVER LINING you won't be disappointed!
Read more
Helpful
Comment Report abuse
See all reviews from the United States