You've subscribed to Eagle Harbor! We will preorder your items within 24 hours of when they become available. When new books are released, we'll charge your default payment method for the lowest price available during the pre-order period.
Update your device or payment method, cancel individual pre-orders or your subscription at
Your Memberships & Subscriptions
There was an error. We were unable to process your subscription due to an error. Please refresh and try again. 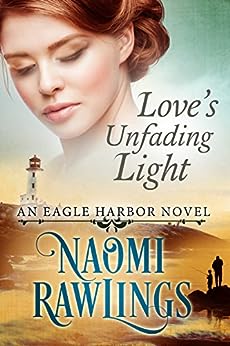 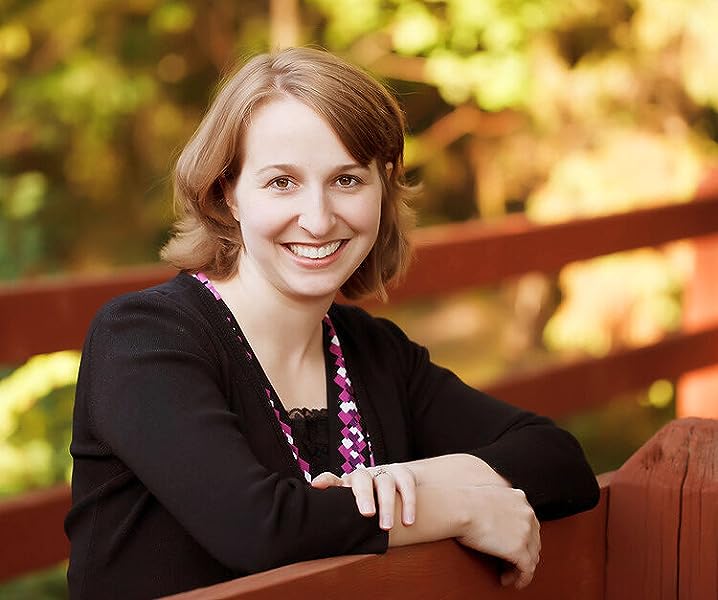 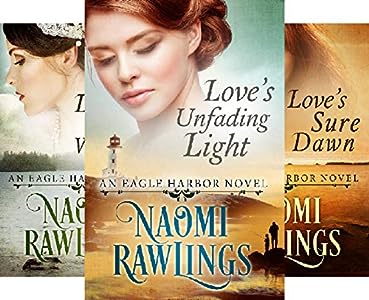 A romance to make your heart pound, but laced with God's truth and the power of family and forgiveness, Love's Unfading Light is a fabulous story and the start of a wonderful series. --Roseanna M. White --This text refers to the paperback edition.

Naomi Rawlings is the author of numerous historical Christian novels, including Sanctuary for a Lady, Falling for the Enemy, and the Eagle Harbor series. --This text refers to the audioCD edition.

4.6 out of 5 stars
4.6 out of 5
982 global ratings
How are ratings calculated?
To calculate the overall star rating and percentage breakdown by star, we don’t use a simple average. Instead, our system considers things like how recent a review is and if the reviewer bought the item on Amazon. It also analyzes reviews to verify trustworthiness.
Top reviews

Dora Hiers
5.0 out of 5 stars Great job bringing the setting to life!
Reviewed in the United States on October 28, 2017
Verified Purchase
I just finished Love’s Unfading Light by Naomi Rawlings and knew I needed to tell you all about it. I snatched it up when it was free on Amazon and finally opened it, but it didn’t take long for the main and secondary characters to draw me into their circle and for me to feel as if I stood on the shore of Lake Superior under the lighthouse in Eagle Harbor, Michigan, in 1880. The author did a great job of bringing the setting to life during the early stages of the US Lifesaving Service. “The wind whipping across the lake, the waves froth-tipped and vicious, and the North Star caught in the uncontrollable swells.” Can’t you just picture a boat being tossed about without any hope of rescue?

Tressa, a widow from a loveless marriage, left with a son, a bakery and a tremendous amount of debt. After her husband’s death, she seemed to do a decent job supporting her and her son, until a robbery unleashes all her dead husband’s creditors to conspire against her. Poor woman lost ground fast. Just thinking about her circumstances makes me so grateful that I wasn’t born in that time period. And Mac, an assistant lightkeeper, willingly sacrificed everything for her without expecting anything in return. Without coming across as preachy, Mac modeled Christ’s love for us.

Although subtle, Love’s Unfading Light packs a powerful message tucked inside those pages. Like how we judge others based on their associations. How sometimes we’re certain we’re following God’s path for our lives, but then He turns us around and points us in a different direction. How God has the power to transform an impossible situation into a blessing. I can’t wait to dig into Love’s Every Whisper, Elijah and Victoria’s story!

To Ponder: Sometimes we can’t see the bigger picture, the whole truth regarding our circumstances, but God knows. Do we accept the current situation as truth and allow the bleakness to overwhelm us or do we look past the circumstances to trust the God who loves us with a limitless love?

Disclaimer: I purchased my own copy of Love’s Unfading Light when it was free on Amazon. This review is my fair and unbiased opinion, and I was in no way compensated.
Read more
9 people found this helpful
Helpful
Report abuse

R. Miller
4.0 out of 5 stars 4.2 stars: Love's Unfading Light by Naomi Rawlings
Reviewed in the United States on March 4, 2017
Verified Purchase
Tressa is trying to support herself and her son Colin with income from her bakery, but a robbery and an ever-expanding list of her late husband's debts weighs her down; one bright spot is lighthouse keeper Mac, who is kind to them, but he's planning to leave soon to start a business elsewhere, and neither of them are looking for love.

Plot and Setting: 4 -- Plot is engaging. Has unique elements and no major holes, but a few shaky bits and/or a slight lack of focus. Setting is clear and believable. Timeline may be a bit hard to follow. A lot happened in a rather short time. I kept thinking more time had passed than really had, as the whole story takes less than 2 weeks. Makes for a very quick romance (and they go particularly quickly from love to marriage), though it manages not to feel too fast. The building weight of debt upon debt upon debt started to feel a bit repetitive, but the resolution of all that was very satisfying. The glimpses of Elijah and Victoria's relationship were interesting, but were more setting up the next book in the series than contributing to the plot of this one.

Characters: 4 -- Main characters are relatable, realistic, interesting, and dynamic. Some minor characters have depth, while others may be slightly stereotyped or simplified. Definite strong points in the relationships between characters. Tressa and Mac face external challenges and internal doubts, and it all felt very real and believable. I like them each individually (weaknesses and all) and as a couple. Some of the minor characters are given a lot of depth and realism, while others (mainly the villainous/snooty/greedy ones) are more stereotypical, one-note characters. Lots of interesting relational dynamics with friends, family, and townsfolk.

Mechanics and Writing: 4 -- A handful of typos, punctuation issues, or word errors. (<15/100 pgs) None of the errors seriously hinder understanding. Good use of POV. Generally skillful writing. Errors include: homophone confusion, mild punctuation issues. Errors only started popping up in the later part of the book, and there weren't too many. Some odd/missing punctuation (like missing quotation marks) and word confusion (snuggly for snugly, motely for motley, morning for mourning, and the character Finley McCabe turning into Finely McCabe on at least 3 separate occasions in the middle of the book). POV alternates between Tressa and Mac mostly, with several sections of Elijah.

Redeeming Value: 5 -- Well-developed, central, uplifting themes. Drugs, alcohol, violence, etc, are not glorified at all. No explicit sex scenes. Clear moral guidelines for behavior. Themes of love and sacrifice (in sharp contrast to the greedy, unmerciful chorus of many in town, especially the wealthy elite), and finding our worth in Jesus, who gave his life for us, rather than judging ourselves based on the opinions of fallible, self-centered humans.

Personal Enjoyment: 4 -- I liked it a lot. Highly enjoyable and very entertaining, with perhaps an issue or two that tempered my pleasure. I’d enjoy reading it again.
Read more
23 people found this helpful
Helpful
Report abuse

Dorothy Roller
5.0 out of 5 stars I loved my first book by Naomi Rawlings. See sent me back to a place I loved to be.
Reviewed in the United States on February 11, 2020
Verified Purchase
This beautiful story that takes place in a town I visited many times in my college years in Houghton and Hancock, Michigan, in the same county as Eagle Harbor is in. This is one of the reasons when I saw this title, that I wanted to read it. It is such an amazing story in the century before I was born. I love historical romances and anyone that takes place in my home state will always be on my list.
One thing this wonderful story tells about besides the copper mining in Michigan and most of what gives the name to the Copper Country in Michigan, because there were many copper mines in that country and other places mostly I believe in the Upper Peninsula of Michigan, is the history of the Great Lakes, especially Lake Superior. This story tells of just how quickly and how bad storms can be on this massively huge Lake and the others. This history given is factual as storms can even take down mighty cargo ships just as badly as the oceans. I was there when the mighty Fitzgerald went down in Lake Superior.
Anyway this has history that is intriguing, as a well written story with a lot going on. I highly encourage you to read this book and this series as I intend to. It's going to be so good.
Read more
One person found this helpful
Helpful
Report abuse
See all reviews

Kindle Customer
5.0 out of 5 stars Enjoyable
Reviewed in the United Kingdom on March 8, 2017
Verified Purchase
This is an enjoyable story with good characters and well written. It is a Christian novel as labelled but the Christian content is not forced superfluous or over egged. It is a natural part of the story. There is a good feel for the hard working life of the period and the desperate situation for women and children. Thankfully no sex and therefore I was able to read without having to skip loads of pages.
Read more
3 people found this helpful
Report abuse

Karen Galloway
5.0 out of 5 stars A Good Read
Reviewed in the United Kingdom on February 9, 2017
Verified Purchase
I really enjoyed this book. It kept me engrossed throughout. I really loved the characters and the way they interacted with each other. This was an intriguing book and I would recommend this book to anyone.
Read more
Report abuse

TamiR
5.0 out of 5 stars Definitely worth a buy
Reviewed in the United Kingdom on May 14, 2018
Verified Purchase
Superb story-telling. Wonderful set of books (the entire series).
Read more
Report abuse

Marcieloves
4.0 out of 5 stars Well written, a great read.
Reviewed in the United Kingdom on May 5, 2017
Verified Purchase
Enjoyable reading. Taught me something about American history.
Read more
Report abuse
See all reviews