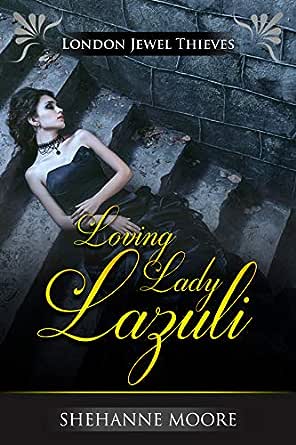 You've subscribed to London Jewel Thieves! We will preorder your items within 24 hours of when they become available. When new books are released, we'll charge your default payment method for the lowest price available during the pre-order period.
Update your device or payment method, cancel individual pre-orders or your subscription at
Your Memberships & Subscriptions
There was an error. We were unable to process your subscription due to an error. Please refresh and try again. 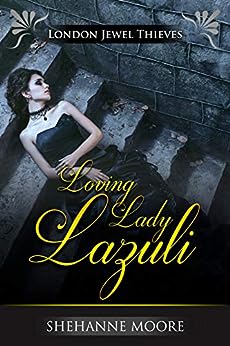 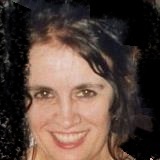 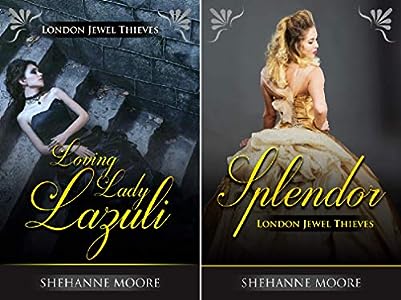 AF
4.0 out of 5 stars Laughs, Applause & True Love
Reviewed in the United States on November 20, 2016
Verified Purchase
I really enjoy stories where the heroine has a wicked background and the hero too. That leads to so many interesting ways the story can work itself out; so many interesting ways for the characters to redeem themselves or not; so interesting, period. Which is exactly what Shehanne Moore has created with Loving Lady Lazuli--an interesting story so full of potential and one that doesn’t disappoint.

Page three puts our main characters—Devorlane Hawley and Sapphire—in a forced encounter, which we quickly learn is not a first for them. Their attraction is rekindled immediately, and readers...hold on tight to your e-readers or books because it goes fast from there. In the next few hundred pages, there’s lies, sex, betrayal, death, sex, conditions and misunderstandings, sex and finally love.

I won’t spoil your enjoyment by delving into the story details, but I do want to point out that this is a historical fiction story. Through the author’s expert storytelling, readers peek into English customs and culture, are exposed to various dialects, and relearn a few historical facts, all of which adds great depth to the story.

On a side, but related note, I have to say a word about the author. This is the second book I have read by Moore and while I appreciate many things about her storytelling, it's her humor I enjoy the most. With her books (at least the two I've read but probably all of them), you will be amused. So if you don't mind a good chuckle while you read, check out Moore's canon of works.

Loving Lady Lazuli is book one in the London Jewel Thieves series. I look forward to reading the other books in the series. Give it a try and I bet you will too.
Read more
Helpful
Comment Report abuse

p.j. lazosTop Contributor: Writing
4.0 out of 5 stars Can you say, pot-boiler?
Reviewed in the United States on March 26, 2017
Verified Purchase
Loving Lady Lazuli

According to Romance Writers of America, romance books garnered $1.08 billion in sales in 2013 and accounted for 34% of the fiction market. With stats like that, I’m wondering why I didn't choose the romance genre but then I remembered — I have no talent for it. Ah, but Lady Shey does.Loving Lady Lazuli is the classic storyline of boy meets girl, boy loses girl, boy meets girl again, but told as a relentless, breathy romantic mystery.

It’s been decades since I read a bodice-ripper if you don’t count the Outlander series by Diana Gabladon which markets itself as romance, but is really a hybrid — the love child of Romance and Historical Fiction — and I may have never read another one if I didn’t chance upon Shehanne Moore’s blog and struck up a friendship with the Lady Shey. Now, announcing your desire to read a virtual friend’s book and write a review can be a tricky process even if they don’t live across the street from you because, well, the blogosphere has limits, too, writer’s tend to travel in the same circles, and you just don’t want to hurt anyone’s feelings. Thank GOD that I just adored this book because all that worry is now a moot point. After reading a few chapters of Loving Lady Lazuli, I was hooked. Moore writes a self-described brand of romance that she calls “smexy”— a cross between smutty and sexy — a classic pot-boiler of a book with the trademark characteristics of historical fiction adding to its allure.

Loving Lady Lazuli is the story of Sapphire, the renowned London jewel thief who no one has ever seen. Sapphire’s greatest defense has been her invisibility. Her many costumes and identity changes have allowed her to remain elusive and because of that, the most successful jewel thief in England. But one evening Sapphire makes a terrible mistake. Her “mark”, the famous Wentworth emeralds, are in her grasp, but the escape route is not. Her partners have let her down and there is no way out except a long trek across an open field in winter, and in an evening gown, no less.

Complicating matters, there is a witness, the rich, young, handsome Devorlane Hawley who happens upon the bewitching Sapphire while driving by in his coach. The unsuspecting Hawley has no idea what’s happening when he offers Sapphire a ride. It all happened so quickly, that kiss, that hand where hands should not be when strangers are involved, the pawning off of the Wentworth emeralds into Hawley’s pocket without him even knowing, and her alighting from the coach before he could catch his breath and clear his addled brain. Months later, he’s been enlisted into the army, the rich man’s version of punishment for a theft, preferable to hanging from the end of a noose, but still a high price to pay for a crime he didn’t commit. She caught him all right, with a breathy kiss and a swift goodbye and he will use all his resources to exact revenge.

For ten years Devorlane harbored his enmity, for ten years, he replayed the events of that night, and for ten years he swore that one day he would find and catch Sapphire and make her pay for ruining his life. Ten years of feeding and nourishing that hatred which festered like the wound to his leg when, upon his return, he is met with a sight that makes his heart both soar and shatter — it’s her, Sapphire, sitting in his drawing room. Now who’s caught?

Want to find out? Then read Loving Lady Lazuli, a romantic page-turner of first order. You may want to ditch the tea and crumpets for something stronger!
Read more
Helpful
Comment Report abuse

Talented author Shehanne Moore never disappoints me with her books with a touch of darkness. Loving Lady Lazuli is the perfect example. If you are looking for the usual romance, then you better read the description. It’s so hot!

Ten years ago, sixteen year old Sapphire was a thief and stole a precious piece of jewelry from Devorlane. Years pass, she is now 26, and Cass meets him again. Omg, will he recognize her? Now, she assumes a new Identity as Cassidy and she hopes that he won’t remember her! Cassidy aka Sapphire and Devorlane share a sexual chemistry that will create a hot passion. Their tempers will flare and sparks will fly with great ferocity as the couple argue, tease and have fun together.

They will soon share a strong sexual connection, however, is it enough to sustain a lasting relationship?
Read more
Helpful
Comment Report abuse
See all reviews

the last unicorn
5.0 out of 5 stars Incredible love scenes...
Reviewed in the United Kingdom on December 6, 2016
Verified Purchase
You would think that an English duke wouldn’t get in trouble after a mysterious woman kisses him and plants the family jewels (no pun intended), which she had just stolen, in his pocket. But unfortunately, Devorlane Hawley is the black sheep of the family, and his father assumes he is guilty and ships him off to the army.

Devorlane has never forgiven that thief. And he’s never forgotten that kiss.
On his return from the wars, whom does he see at his homecoming soiree but that very same thief? And how is he going to exact his revenge if all he wants to do is resume that kiss from ten years ago?

Loving Lady Lazuli is such a passionate novel. I really enjoyed how the fine line between anger and sexual tension played out between Devorlane, who is madly attracted to the woman who ruined his life and Cassidy, aka Sapphire, the famous but reluctant jewel thief, who simply wants to regain her family lands, which happen to be right next to Devorlane’s.

With such an exciting encounter at the very opening, I wondered where the plot was going to go without ending too abruptly. And Shehanne Moore did an excellent job sustaining the tension between the two characters. To Cassidy’s surprise, Devorlane helps her bury her former accomplice’s dead body, which seemed to serve as a great bonding experience for these two happy campers.
And sooner than I thought, they took things into the bedroom (and sometimes the library!), but only because it was part of Devorlane’s plan for revenge and Cassidy’s plan to prove her rights to her family’s estate.

Things get really interesting from there! When Cassidy becomes Devorlane’s mistress, they both think it’s purely business, but with both of them trying to control things in the bedroom, we get some amazingly nuanced love scenes that are by turns funny, steamy, and outrageous.

Those scenes make for the most amazing parts of the novel as the wars between Devorlane and Cassidy are waged in scorching hot sexual encounters.

I’m becoming a big fan of Ms. Moore’s work as I discover more and more of her unique scenes and roguish but loveable characters. The last Shehanne Moore novel I read, The Viking and the Courtesan won me over with its humour and sweeping adventure, whereas Loving Lady Lazuli seduced me with its sultry and sinful pleasures. I can’t wait to read Ms. Moore’s other novels!
Read more
Report abuse

Aimee
5.0 out of 5 stars Another winner
Reviewed in the United Kingdom on April 19, 2014
Verified Purchase
Really really shocked that I not only loved two historical books (I'm more of a contemp girl) but 3! And they're all by this author. If, like me, historicals aren't your cup of tea please don't let this put you off. This author does emotional turmoil, fresh and shocking twists and characters you can't help but root for. A definite gem again. Well done Ms Moore!
Read more
Report abuse

El Abuelo
5.0 out of 5 stars A Jewel of a Romance
Reviewed in the United Kingdom on May 13, 2014
Verified Purchase
Historical Romance is not my default genre by any means but then this is way more than a historical romance. The tantalising and talented jewel thief that is Cassidy Armstrong and the rake with a heart he doesn't care to admit that is Devorlane Hawley crackle off the page at the reader. Their back stories are complicated of course and they are a well matched pair. He has a score to settle with her and she has a dream to realise but he's not in it. But then their goals change and quickly. This is a sure fire page turner. An excellent read!
Read more
Report abuse
See all reviews