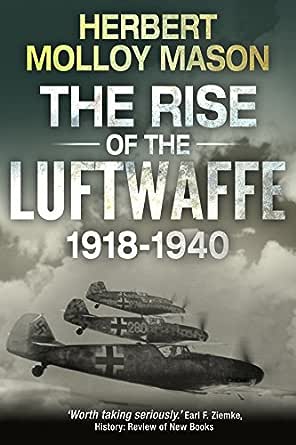 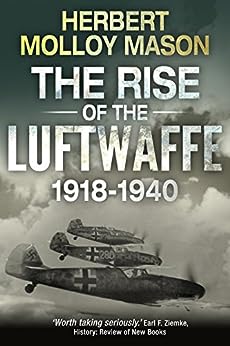 Michael J. Russo
5.0 out of 5 stars A very important book.
Reviewed in the United States on October 25, 2013
Verified Purchase
The book adds a dimension to the events after WWI which set the Stage for the players who brought about WWII.
It exposes the evil of the treaty of Versailles that fueled the hate for future hostillities throughout the World.
Read more
One person found this helpful
Helpful
Comment Report abuse

Berkeley's Ralph
5.0 out of 5 stars The Rise of the Luftwaffe 1918-1940, by Herbert Molloy Mason, 1973.
Reviewed in the United States on March 1, 2012
On July 21, 1969. American Neil Armstrong became the first man to walk on the Moon. Throughout the world Germans were celebrating this event as a German triumph: The net result of Operation Paperclip.

Operation Paperclip was the US program used to recruit the scientists of Nazi Germany for employment by the United States in the aftermath of World War II (1939-45). The splitting of Germany to the four allied powers had been mapped and agreed upon early in 1945. At the same time the United States was concentrating their bombing on targets that would fall into Russian hands. Nice way to treat an ally right? The primary purpose of Operation Paperclip was to deny German scientific knowledge and expertise to both our allies: the USSR and the UK. The recruitment of German scientists began after the European Allied victory (VE Day May 8, 1945), though "US President Harry Truman did not formally order the execution of Operation Paperclip until August 1945."

Germany found itself at a logistical disadvantage failing to conquer the USSR 'The failed conquest had depleted German resources and by early 1943, the German government began recalling from combat huge numbers of scientists, engineers, and technicians. The plan: to bolster German defense for a protracted war with the USSR. The recall included 4,000 rocketeers returned to Peenemünde, in northeast coastal Germany, to wit: Overnight, Ph.D.s were liberated from KP duty, masters of science people were recalled from orderly service, mathematicians were hauled out of bakeries, and precision mechanics ceased to be truck drivers.' Nonetheless the War was lost. Excellent German scientists came to the US and continued their scientific work.

At the start of W.W.II Germany had come a long way in their quest for world air power superiority. The country had been severely restricted at the end of WW I. The Treaty of Versailles demanded that Germany surrender all their operational aircraft and agree to suspend even commercial aircraft ideas for 6 months. The idea was to stop German advances in avionics and aircraft development so that the rest of the flying world would not only "catch up" to Germany's technological expertise but ensure that they would be placed at a strategic disadvantage, hopefully, never in a position to recover.

Germany had flying in its soul. They led the world in Glider technology, soaring techniques and Glider Clubs; skirting the restrictions of Versailles these Glider pilots were to become the fighter and bomber pilots of WW II. Germany developed and mapped a plan to one day emerge and avenge their humiliating loss in WW I, promising themselves victory by air power eventually in the future World War II.

The Rise of the Luftwaffe 1918-1940 details specifically the German plan to emerge from its defeat in W.W.I to become the world leader in air power nearly winning W.W.II. It is a must read for anyone studying the History of W.W.II, Avionics, The History of Aircraft; Jet Airplanes, or any related subject where scholarship expertise is a must. I recommend the work without reservation.
Read more
3 people found this helpful
Helpful
Comment Report abuse

michael magro
3.0 out of 5 stars Three Stars
Reviewed in the United States on July 27, 2017
It was okay for a view of the other side ofvwar
Read more
Helpful
Comment Report abuse
See all reviews from the United States

J.L.Betts
5.0 out of 5 stars Very well researched and a riveting read.
Reviewed in the United Kingdom on October 7, 2019
Verified Purchase
Shows how politicaly and militarily weak Britain was after world war 1 and in turning a blind eye to evidence, allowing dangerous subdifuge to succeed. Highlights the determination of the German military to rise again.
A very detailed and well written account of German aviation development in the 20s' and 30s'. World war 2 and aviation buffs will enjoy this book.
Read more
One person found this helpful
Helpful
Sending feedback...
Thank you for your feedback.
Sorry, we failed to record your vote. Please try again
Report abuse

History Jack
5.0 out of 5 stars The rise of the Luftwaffe
Reviewed in the United Kingdom on December 21, 2016
Verified Purchase
I enjoyed reading this book, it gives a great insight into the developing Luftwaffe between the two wars. It shows how the Germans never really got to grips with mass production before the war and why they never produced the four engine Ural Bomber. The book shows that the Germans were not as efficient as you might think in expanding the Luftwaffe, included a shortage of trained pilots before the outbreak of hostilities. If the Germans had not missed a golden opportunity by developing and producing the First Jet Fighter way before its time, and also not over engineered many promising airplane designs, then it really could have been a different outcome to the second world war.
Read more
3 people found this helpful
Helpful
Sending feedback...
Thank you for your feedback.
Sorry, we failed to record your vote. Please try again
Report abuse

Peter S
5.0 out of 5 stars An excellent account
Reviewed in the United Kingdom on October 28, 2019
Verified Purchase
This is a well researched and very well written account of the build up of the Luftwaffe in the teeth of opposition from Germany’s former enemies. German cunning was countered by duplicity, myopia and miscalculation on behalf of signatories to the Versailles Treaty.
Read more
Helpful
Sending feedback...
Thank you for your feedback.
Sorry, we failed to record your vote. Please try again
Report abuse

Martinus
5.0 out of 5 stars An Excellent History
Reviewed in the United Kingdom on August 24, 2017
Verified Purchase
A very good book in Kindle. Informative and interesting. It starts with the Treaty of Versailles and the part it played in creating the Luftwaffe and then systematically moves forward from that point. Highly recommended.
Read more
Helpful
Sending feedback...
Thank you for your feedback.
Sorry, we failed to record your vote. Please try again
Report abuse

Oldgeezer
4.0 out of 5 stars Good Read
Reviewed in the United Kingdom on November 24, 2017
Verified Purchase
Absorbing and easy reading account of the Luftwaffe and the people behind it - does what it says on the tin!
Read more
Helpful
Sending feedback...
Thank you for your feedback.
Sorry, we failed to record your vote. Please try again
Report abuse
Load more international reviews

Mrs G K Johnson
4.0 out of 5 stars Really interesting book
Reviewed in the United Kingdom on November 17, 2017
Verified Purchase
This book covers the period in great detail. gave an in depth insight on the birth of modern air warfare
Read more
Helpful
Sending feedback...
Thank you for your feedback.
Sorry, we failed to record your vote. Please try again
Report abuse