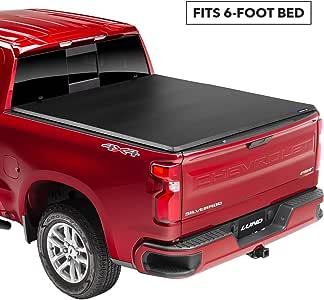 4.0 out of 5 stars
4 out of 5
116 customer ratings
How does Amazon calculate star ratings?
Amazon calculates a product’s star ratings based on a machine learned model instead of a raw data average. The model takes into account factors including the age of a rating, whether the ratings are from verified purchasers, and factors that establish reviewer trustworthiness.

G
5.0 out of 5 stars Great Cover
Reviewed in the United States on July 15, 2016
Size: 5' BedStyle: Soft Tri-FoldColor: Premium Matte CanvasVerified Purchase
First time truck owner, and thanks to the Prime Day sale, this became my first truck bed cover. I received the cover yesterday, opened up the box, read the instructions, and had it installed in less than 30 minutes. Super easy installation as long as you read the instructions. The cover looks great, and it even rained just a few minutes after I installed it, and it kept the bed completely water free (however, I'm interested to see how this aspect of the cover holds up...more on that later). The only real issues I have with the cover are as follows:

1) The bolts that the clamps are screwed on to are not long enough for the 2016 bed rails. The instructions showed the clamp mechanism adjusting to where the bolt would be vertical when it clamps to the bed rail adapters. If you tried to do this, though, the clamping mechanism would completely unscrew from the bolt before it was able to clamp onto the bed rail adapter. Therefore, the clamping mechanism and bolt have to be put at an angle in order to make them work. Not a big issue, but annoying nonetheless.

EDIT: After being on the truck for a day, the clamps and bolts work MUCH better. I'm not sure if the heat caused the bolts to expand to the proper size or if the tension caused enough strain for the clamp to work properly or if it was something else entirely, but I had to significantly tighten all 4 clamps after they had been on the truck for 24 hours.

2) The corners on the front of the bed cover (the side closest to the cab) stick up off the bed by about 1/4 inch, making the bed cover look slightly warped in the front. This makes me skeptical about how well it will keep water out of the bed in the long run. Again, not a big deal, but just a slight imperfection.

Outside of those two things, I have no issues with this cover whatsoever. The fabric is high quality, it looks excellent, it seems extremely secure and does not flap in the wind as I'm driving, and it's super easy to take off and put back on.

Note: I have a 2016 Toyota Tacoma double cab with the short bed. When I received the item, the box said it was for '05 - '15 Tacomas, but I decided to install it anyway and it worked just fine, so don't let that deter the 2016 Tacoma owners out there from buying this product or trying to put it on your truck.

Update: After about 2 months of use, I couldn't be happier with this cover. It has practically kept the bed completely dry through several summer storms. It also looks really good on my truck. It gives it a nice sleek look, and if you lock the tailgate, there's no way anybody is getting into your bed unless they cut it open. Excellent cover.

Salado
5.0 out of 5 stars fit a 2016 tacoma
Reviewed in the United States on May 6, 2016
Size: 5' BedStyle: Soft Tri-FoldColor: Leather Embossed VinylVerified Purchase
looks great on my 2016 Tacoma, install took 20 min and super easy. comes with direction, it was a life saver this weekend with all the rain we got making a short road trip the bed stayed 99.9% dry. I didn't use all that big rubber weather stripping because it didn't want to fit right, but with the thin weather stripping it works fine.
Read more

Go Cats
5.0 out of 5 stars 2010 Tacoma
Reviewed in the United States on February 23, 2014
Size: 5' BedStyle: Soft Tri-FoldColor: Leather Embossed VinylVerified Purchase
Saw this for a pretty good price on Amazon and ordered for our 2010 Tacoma short bed. It took me about an hour and a half to install. Other reviewers have noted that no instructions are included, which was the case with my purchase. I spent the bulk of my time figuring out how to slide the aluminum brackets into the cargo rails. I also spent quite a bit of time making sure that the bed cover was even on the bed before clamping it down. Again, others have previously noted that the Tacoma bed tapers from front to back, so I wanted make sure that it was evenly spaced near the tailgate.

We've had it installed for a couple weeks and really like it. Cargo stays dry. I haven't used the tri-fold feature yet.
My main beef is that the weatherstrip that goes on top of the tailgate sometimes "catches" on the cover as I close the tailgate. No other problems so far.
Read more
5 people found this helpful
Helpful
Comment Report abuse

Jason B. Graves
5.0 out of 5 stars Great quality & Price
Reviewed in the United States on July 12, 2015
Size: 5' BedStyle: Soft Tri-FoldColor: Leather Embossed VinylVerified Purchase
I bought this for a 2015 Toyota Tacoma and was able to unpack it and install it in about 15 minutes. I've had it on my truck about a month now and I'm happy with the quality and the fit. I compared the pricing of several covers and this was not expensive and to this point I consider it a great purchase! I love that it's made in the USA!
Read more
7 people found this helpful
Helpful
Comment Report abuse

77Chargers
5.0 out of 5 stars Awesome fit and look!
Reviewed in the United States on May 21, 2015
Size: 5' BedStyle: Soft Tri-FoldColor: Leather Embossed VinylVerified Purchase
Initial set of clamps and directions took about 30 minutes to install. Now it takes less than 5 minutes. The fit is excellent and has support for the vinyl which keeps it tight. Very satisfied and would recommend to anyone.
Read more

Steve
5.0 out of 5 stars Almost perfect fit
Reviewed in the United States on September 3, 2016
Size: 5' BedStyle: Soft Tri-FoldColor: Leather Embossed VinylVerified Purchase
Close to perfect fitting a 2016 Tacoma SR5 Double Cab. I had a Lund cover for my 2012 Tacoma and never any problems. The bed on the 2016 is a little different and can't use the larger rubber seals that come in the box and I used on the 2012. Used the weather stripping only and no leaks. It is a little wider thought in the back than I would want is why the 4 stars. The Tacoma bed tapers some so if a company is building a bed cover to fit them, they should consider that.

BTW... The taper on the bed to the back and the cover on the 2012 was not exact either, but it did fit a lot closer.
Read more
Helpful
Comment Report abuse

TJ-2020
5.0 out of 5 stars So far so good
Reviewed in the United States on October 31, 2015
Size: 5' BedStyle: Soft Tri-FoldColor: Leather Embossed VinylVerified Purchase
For the money I highly recommend this cover. It was really easy to install with nothing to drill. As many other reviewers have mentioned and I will repeat here, because of the Tacoma bed is not a perfect rectangle, you need to play and adjust to get the cover to look centered. Once mounted in the right position the cover does a great job. I've been on the highway in a storms with heavy rain and wind. I'm not saying the bed was bone dry but there was very little moisture. I have no issue keeping things dry in the bed when it rains. It will be interesting though to see how the cover holds up to a New England winter.
Read more
Helpful
Comment Report abuse
See all reviews from the United States
Pages with related products. See and discover other items: genesis 2016, tonneau replacement parts, tonneau cover clamps, 08 toyota tacoma bed racks, 2009 Genesis Brakes, Semi Trucks Chrome Accessories