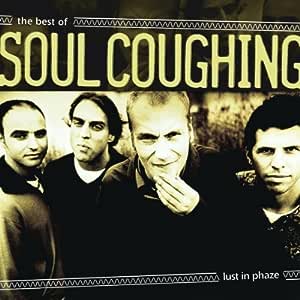 4.1 out of 5 stars
4.1 out of 5
28 customer ratings
How does Amazon calculate star ratings?
Amazon calculates a product’s star ratings based on a machine learned model instead of a raw data average. The model takes into account factors including the age of a rating, whether the ratings are from verified purchasers, and factors that establish reviewer trustworthiness.
Top Reviews

NRF
5.0 out of 5 stars Soul Coughing
Reviewed in the United States on September 20, 2010
Format: Audio CDVerified Purchase
Very talented writers and musicians. This is a good CD to purchase as an introduction to Soul Coughing.
Read more
Helpful
Comment Report abuse

Angeline
4.0 out of 5 stars The Lead Singer has a great voice---very unique
Reviewed in the United States on November 5, 2013
Format: Audio CDVerified Purchase
I really like the voice of the lead singer.
I had heard the lead singer on a talk show and he sang a few songs from his album.
I decided to buy the Cd of his BAND, and now I think I should have just stuck with my idea of purchasing the "Solo" CD (ie: the one made by the Lead singer).

I will probably just go ahead and buy the SOLO cd soon.

The Lead singer is truly amazing!

The BAND in itself is OK...(ie: not bad, but not super fantastic ,in my opinion).
However, if you can preview this Cd before purchase, you might like it...It just depends on what you are expecting.
But plz do investigate the other CD though (ie: the one issued by the LEAD SINGER), because you might really like that one too.

Tony T
3.0 out of 5 stars A Bit Flat
Reviewed in the United Kingdom on February 20, 2013
Format: Audio CDVerified Purchase
Came to this collection with high hopes after hearing the truly outstanding 'Murder of Lawyers' (on the album Offbeat: A Red Hot Soundtrip) but felt afterwards that if this is the best, I may not bother with the rest. I've listened to it a few times and although there is some good stuff ('Blue Eyed Devil', 'Unmarked Helicopters'), the only real gem (and it is a diamond) is '$300'.
Read more
Helpful
Sending feedback...
Thank you for your feedback.
Sorry, we failed to record your vote. Please try again
Report abuse