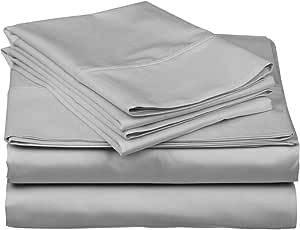 Visit the THREAD SPREAD Store
4.2 out of 5 stars 14,779 ratings
Available at a lower price from other sellers that may not offer free Prime shipping.

4.2 out of 5 stars
4.2 out of 5
14,779 global ratings
How are ratings calculated?
To calculate the overall star rating and percentage breakdown by star, we don’t use a simple average. Instead, our system considers things like how recent a review is and if the reviewer bought the item on Amazon. It also analyzes reviews to verify trustworthiness.

Shawn M.
5.0 out of 5 stars Neither Cold, nor hot.. these sheets are amazing :)
Reviewed in the United States on April 16, 2018
Verified Purchase
So... what's the one thing I thought I'd never be reviewing? Probably sheets.

That said, my wife and I decided to redo our bedroom, with new furniture, carpeting, and a new mattress.... and when buying the new mattress, we completely forgot why we weren't going to upgrade to a king size... all of our sheets and comforters were for queen size.

So, with the new furniture on the way, we realized we needed new sheets.... after spending more time at rather large brand name stores, we realized 3 things.

1.) King sized sheets are harder to find, and come in less options.
2.) Holy COW the prices for King sized sheets were crazy.
3.) We were going to buy our first set of 1000TC Egyptian Cotton sheets... just to see why the rest of the world is so gaga over them.

After being unable to stomach spending the $300+ for a good 1000TC set, I decided we'd check on Amazon.

After looking around, we decided to go with this brand, due to the amount of reviews, and positive responses.

They showed up quickly, they were installed on the bed... and I have to admit, the first day, I took a nap on them, and thought.. 'meh.. not bad.. not great.. but not bad'... Keep in mind this was a 2 hour nap, on top of the sheets, after moving furniture all day long.

So... when I went to bed, later that night, I wasn't all that excited about sheets... after all.. they're just sheets...

Now, this is the part where things got weird. They're just sheets... right?

After sleeping under the sheets all night.. I woke up the next morning, surprised.... it was 8am.. on a weekend.. and I was wide awake, refreshed and comfortable in bed.... and while I'm sure some of this had to do with the new mattress... there's 1 thing that I discovered... the sheets weren't hot... they weren't cold.. they were... neutral.

I tend to run hot, and every set of sheets we've ever tried.. I wind up overly hot under them, and kick off the sheet and blankets during the night... But, there I was.... super comfortable.. at an hour I normally don't see on the weekends...

When my wife woke up, about an hour later.. even she commented on how comfortable the sheets were. She wasn't cold, nor hot.. just.. comfortable.

*sigh* Apparently after discussing it, we're planning on our next couple of purchases of the same sheets (different colors).... LOL... So much for the cheap $20-30 sheets.. I'm gonna be broke, it appears.

The silver lining of this, is that these sheets are awesome, and their price is amazing compared to other 1000TC sets of sheets you'll find in stores.

Seriously, give them a shot.. if I can be made to be a believer in what I was missing.. you can too :)

silverbob
5.0 out of 5 stars We liked the first one very much
Reviewed in the United States on May 12, 2018
Size: QueenColor: Dark GreyVerified Purchase
This is a second set of Thread Spread we bought. We liked the first one very much, King size,  Thread Spread True Luxury 100% Egyptian Cotton - Genuine 1000 Thread Count 4 Piece Sheet Set- Color Silver,Size KING - Fits Mattress Upto 18'' Deep Pocket  The queen set did not disappoint either. Quality is great, seam, stitching, generous elastic that easily covers 10 inch thick matress with room to spare. The sheets feel very comfortable, not too cold or hot after a night of sleep. The price is not bad either, not sure if I've ever seen another 1000 thread count set at this price level. Definitely looking to get more.
Read more

ADS Northwest OH
5.0 out of 5 stars Great sheets at a super price!
Reviewed in the United States on July 3, 2018
Size: QueenColor: TaupeVerified Purchase
The colors are richer than shown and the fabric is true to the product description! With proper laundering, these sheets will last a long time! They fit my 15” deep queen size waterbed mattress perfectly with room to spare! They look beautiful and feel great! They did wrinkle in a low dryer, however...100% Cotton will do that! If you take them out of the dryer right away, you can smooth most of the wrinkles out by handle. If you want them to be wrinkle free without ironing, then 100% Egyptian Cotton sheets are not for you! They do take just a bit of TLC, but we’ll worth it for the softness & quality. Improper care results in rapid fabric break down & “moth” looking holes! Wash them separately with little to no fabric softener & only dry on LOW temp!
Read more
443 people found this helpful
Helpful
Comment Report abuse

Amazon Customer
5.0 out of 5 stars Lives up to the hype
Reviewed in the United States on January 15, 2018
Verified Purchase
This was the first time I'd ever purchased an expensive set of sheets and I really didn't know what to expect. My girlfriend was extremely skeptical and thought it'd be a waste of money. But I'm happy to say that this is the best set of sheets I've ever owned, and my skeptical girlfriend loves them.

They have a good weight and stay nice and tight on the bed. Given their weight, I was expecting them to be scratchy, but that's not the case. Extremely comfortable and worth every penny.

Also worth noting -- I washed them 3 times before first using them because I read it takes a few washes before they soften up.
Read more
481 people found this helpful
Helpful
Comment Report abuse

Paul W.
1.0 out of 5 stars Absolute Crap would be an improvement
Reviewed in the United States on July 10, 2018
Size: California KingColor: BurgundyVerified Purchase
Holy Crap ... in every sense of the word! I opened the package and the odor hit me ... smelled similar to cow manure! Whatever. I threw the sheets into the washer ... twice, cold wash, dry low heat. Then tried to put on the bed.
The Amazon page says the California King fitted sheet is an 18" pocket. The packaging says it's 17" pocket. My mattress is 12". The pocket of the new sheet is 12", not 17 or 18. I tried to put the fitted sheet on the mattress and although the width of the sheet is barely wide enough, the length is 2" too short to fit the mattress, and add to that the elastics will not tuck under the mattress because it won't fit a 12" mattress. See attached photo of pocket.
The flat sheet: Amazon page says it 108 x 112, the packaging says it 112 x 114, real life and in person it's 96 x 101.
They're supposed to be 1000 thread. I can't prove or disprove, but it doesn't feel like the quality of 1000 thread I've found in other products.
I've already washed them, so Amazon won't take them back.
So, I got burned.
Hmm, n True Luxury 100% Egyptian Cotton - Genuine 1000 Thread Count 4 Piece Sheet Set- Color Burgundy, Size California King - Fits Mattress Upto 18'' Deep Pocket ot a bad idea. I think I'll burn the sheets. What's $99?
Read more

Leslie White
5.0 out of 5 stars Excellent choice
Reviewed in the United Kingdom on February 27, 2019
Size: QueenColor: SilverVerified Purchase
These are lovely sheets, soft and comfortable. They fit the bed perfectly. Vertical elastic at the fitted corners takes up any extra fabric from the deep pocket, while they are very easy to slip over the mattress. Further, they arrived right on time.
Read more
One person found this helpful
Report abuse

Mimi
3.0 out of 5 stars Ok
Reviewed in the United Kingdom on December 29, 2018
Size: QueenColor: SilverVerified Purchase
Nice color. But I would have preferred a smoother fabric that does not crease easily.
Read more
2 people found this helpful
Report abuse

Khaled El Seweify
2.0 out of 5 stars Substandard.
Reviewed in Canada on June 2, 2020
Size: QueenColor: WhiteVerified Purchase
Extremely thin and cheap feeling. Pillow cases never stay on as they seem to be on the smaller side. Do not believe these are really 1000 thread count. Would not recommend.
Read more
13 people found this helpful
Report abuse

Mary Gunning
5.0 out of 5 stars Very Good
Reviewed in the United Kingdom on March 1, 2020
Size: QueenColor: BurgundyVerified Purchase
The item's arrived before the expected date. The item's are as advised.
Read more
Report abuse

Barry B.
1.0 out of 5 stars Not 1000 Thread Count More Like 300
Reviewed in Canada on April 25, 2019
Size: QueenColor: TaupeVerified Purchase
After receiving our sheets, two sets to be exact, two months later and a couple of washes have noticed little cotton balls forming. 1000 thread count sheets should not be doing this after two months!
Read more
14 people found this helpful
Report abuse
See all reviews

Page 1 of 1 Start overPage 1 of 1
This shopping feature will continue to load items when the Enter key is pressed. In order to navigate out of this carousel please use your heading shortcut key to navigate to the next or previous heading.
Back
Next
Pages with related products. See and discover other items: king size bed mattresses, king size bedroom sets, king size mattress sets, silver sheets, design pillowcase, bath and bed products