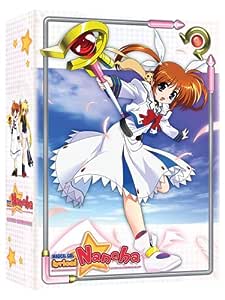 The Jewel Seeds, artifacts from an ancient magical civilization, have been spread across the galaxy. Nanoha Takamachi becomes Lyrical Girl Nanoha to seal the Jewel Seeds and protect the Earth, but another girl appears who desperately tries to collect the seeds for a far more dangerous purpose!

Magical Girl Lyrical Nanoha (2004) scored a big hit in Japan, generating two broadcast sequels, a feature-length "retelling," and an OAV. The series begins like a mixture of Cardcaptor Sakura and Inu-Yasha. After a strange dream, third grader Nanoha Takamachi discovers a ferret-like creature in a nearby park: Yuuno, a being from another planet, has disguised himself in this form while he's trying to find the powerful Jewel Seeds that have been scattered on Earth. Nanoha, who has little of Sakura's insecurity, curiosity, or charm, takes these revelations in stride. She quickly develops her magical powers, but she and Yuuno encounter a rival collector, a blonde girl named Fate who's accompanied by a canine familiar. At this point, the story veers in a completely new direction, jumping from a low-key shojo (girls') adventure to an overblown epic involving travel through space, time and alternate dimensions. The story-telling is erratic at best. Although Nanoha has two adoring parents, two doting siblings, and two best friends at school, she's sure that a friendship with Fate will cure her loneliness. During the climactic battle, she, Yuuno, and a new ally have to seal a reactor-- although it's never been mentioned until that point. But hard-core fans of magical girl adventures may not care about these gaps. (Rated 13 and older: brief nudity, mild violence and risqué humor) -- Charles Solomon

(1. Is This What You Call a "Mysterious Encounter"? 2. My Magical Incantation is "Lyrical"? 3. The City's in a Lot of Danger? 4. A Rival!? Another Magical Girl! 5. This is a Town of Hot Water, Uminari Hot Springs! 6. Feelings That Can't Be Understood? 7. The Third Mage!? 8. There's A Really Big Crisis? 9. The Decisive Battle Above the Ocean! 10. Everybody's Seperate Heart-felt Vows, 11. Memories That Lie Beyond Time, 12. The Time of the Sealing of Our Fates, 13. Call My Name)

Zico Gordon
5.0 out of 5 stars Excellent under-appreciated Anime
Reviewed in the United States on January 10, 2009
Verified Purchase
I know it looks like the typical magical girl anime and it does start that way and then verges into character building and considering it's a 13 episode anime it closes rather well. I loved watching the subtitled version with japanese audio better than the english audio but that everyone own preference.

People should give this a chance you won't be disappointed and look out for Lyrical Nanoha A's the sequel which is even better than this one.

Amazonのお客様
5.0 out of 5 stars A Story of People
Reviewed in the United States on December 19, 2008
Verified Purchase
The product description for this anime doesn't really do it justice. From the description, one might think this a typical "collect all of the artifacts" mission typical of its genre. But the Jewel Seeds are not really the point of the plot.

As the titular character, Nanoha Takamachi, puts it herself at the start of the first episode, "Sometimes, a person's emotions can touch and clash with someone else's. And there's people whose feelings can bond with another so perfectly, they can talk without saying a word. Well, this is a story about people like that and what happens when they eventually meet."

For Magical Girl Lyrical Nanoha, the battles and the Jewel Seeds take a back seat to the characters and how they are affected by the events that take place. In its 13-episode run, the series manages to do what many shows fail to accomplish with far more airtime: it tells a story of people, a story rich in character development, character interaction, and ultimately meaning. And amidst all of that, it still retains its place as a magical girl show, with flashy attack spells, a transformation sequence, and a third-grade girl with magical power.

Easily one of the most interesting and enjoyable anime series I've seen in a while, and if you like the magical girl style, Magical Girl Lyrical Nanoha shouldn't be missed.
Read more
11 people found this helpful
Helpful
Report abuse

M. Taylor
5.0 out of 5 stars Good series for younger teens.
Reviewed in the United States on May 12, 2009
Verified Purchase
Both of my daughters 10 & 14 love anime. It is a complex world to find anime that is both tame enough from adult anime and yet not so simplstic that you could categorize it with Barney. I was lucky enough to find this series among others for my daughters. It has a great Magical girl feel and while there is a hint of romance it; is not so in-depth that I need to restrict my 10 yr old from watching.
Read more
One person found this helpful
Helpful
Report abuse

Amazon Customer
5.0 out of 5 stars Magical Girls that Rock!
Reviewed in the United States on April 16, 2009
Verified Purchase
There's humor, drama, angst, action, even a tinge of romance! The girls are incredibly adorable and magical warfare couldn't have looked more awesome in the hands of a bunch of third graders!

So if you're a Magical Girl anime fan, you HAVE to buy this and High A's, and if you're not, you'll want this to be the first one you've ever watched. Trust me! ^^
Read more
One person found this helpful
Helpful
Report abuse

Karsten Sethre
5.0 out of 5 stars Not your typical magical girl show
Reviewed in the United States on October 16, 2008
Verified Purchase
Lyrical Nanoha starts out looking like a typical Magical Girl show - the main character meets a talking animal that gives her a magic item, which she uses to fight off a monster attack, and she is given the task of collecting powerful artifacts (Jewel Seeds).

The first difference one notices is that, atypical for the apparent genre, Nanoha throws herself at the task with enthusiasm, hard work, and responsible decisions. After Fate shows up in episode 4, the monster-of-the-week takes a back seat to character development and the conflict between the two girls. When another group shows up at the end of episode 7... well, I won't spoil anything further.

Lyrical Nanoha, despite being a show where the main character is a third grade girl with magical powers, is more targeted to the seinen (young men) demographic than the shoujo (young girls) one. That's not because of fanservice (there's a typical transformation sequence, but that's really it), but because of the more complex plot, the attention to detail given to the battles and the character development.
Read more
26 people found this helpful
Helpful
Report abuse

BlackSwordsman
5.0 out of 5 stars Wrong item product review.
Reviewed in the United States on August 5, 2020
As you know from other reviews this series is one of the best out there for any anime. view link below to go to the product I own. I messed.

Fred Roach
5.0 out of 5 stars Great series, unique.
Reviewed in the United States on October 3, 2013
I have to argue with this:

Magical Girl Lyrical Nanoha (2004) scored a big hit in Japan, generating two broadcast sequels, a feature-length "retelling," and an OAV. The series begins like a mixture of Cardcaptor Sakura and Inu-Yasha.

This series is nothing like Cardcaptor Sakura and nothing like InuYasha, Yuuno doesn't sit when she says to, he's smart and intelligent. I hate when a company like Amazon writes a review of something they have no idea about.
Read more
Helpful
Report abuse
See all reviews