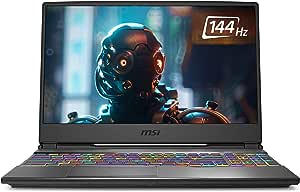 Visit the MSI Store
4.5 out of 5 stars 123 ratings
| 47 answered questions
Available from these sellers.

4.5 out of 5 stars
4.5 out of 5
123 global ratings
How are ratings calculated?
To calculate the overall star rating and percentage breakdown by star, we don’t use a simple average. Instead, our system considers things like how recent a review is and if the reviewer bought the item on Amazon. It also analyzes reviews to verify trustworthiness.

Fauxfyr
1.0 out of 5 stars Beyond disappointed-Updated battery information at bottom
Reviewed in the United States on April 27, 2020
Style: 15.6"|RTX 2060 |i7-10750H|512GB NVMeVerified Purchase
Let's start off with the merchant was fine. It was well packaged and arrived in about a week.

I own an MSI GE62 6QD Apache Pro with an NVIDIA GTX 960M graphics card, 128ssd 1 TBHDD i7-6700HQ 2.6 GHz. It's a great machine and I love it. But with the whole work from home thing, I screwed up and for the first time since the dawn of laptops, I toppled mine and cracked the screen. I figure, hey, it's four years old, I should get a new one and use the old one as a back up when I replace the screen.

The MSI GP65 Leopard 10SEK-048 is a major disappointment.
The cons:
The AC cord connects in the center of the the side, not in the back of the side. I have enough trouble with cables being in my way and this is ALWAYS in the way.
2 USB ports are on the very front of the side on the right. Again, who wants a cable right where your right hand is reaching for a drink? Much less 2? If you don't use many USB peripherals, this may not be an issue for you.
Less than an hour of battery life. How does this even make sense for a notebook? No matter what you are doing, even on the lowest brightness and saver setting. LESS than an hour. My four year old GE62 gets 2.5 hours still.
Sleep? Good luck with that. On sleep, even with the lid closed, mine wakes up every three hours and cycles through something, then goes back to sleep. Don't leave it unplugged and think sleep will do you any good at all.
The camera. I don't understand it. Maybe its because the screen is sharper, but the quality of the camera appears far worse than my GE62.
The speakers. Really not worth much at all. Even plugging the laptop into a 32" TV with an HDMI cable didn't help the sound much. It was quite sad.

The Pros
Pretty keys, if you like colors
Sharp screen for watching your less than an hour of video or playing your less than an hour of games or conversing with anyone on Zoom or Skype for less than an hour. Unless you don't want to be mobile and just want to plug in your power cable.
Fast. There is no denying the speed.
Multi tasks well. I am a person who keeps several things going at a time. Excel is a notorious memory thief and I am famous for having dozens of massive spreadsheets open and working, along with Netflix, Photoshop, image editing programs, and maybe running a game on the side. It doesn't affect the performance of this machine at all.

Much as I wanted to love this machine, I'm barely able to use it at all. It's useless as a notebook, has a terrible design for the power cord and USB ports, is a disappointment in so many basic ways. But the deal breaker is the lack of battery life. What is the point of a notebook where you can't take it mobile? If all you want is a processor and a graphics card to plug monitors into for game play, there are better choices out there.

Update 2020-5-1: Through no help of the (admittedly very nice) help desk, I finally found a way to extend the battery life on my personal computer (no guarantees it will help anyone else). I shut down the Dragon Center completely. With Dragon Center up, I get 1 hour and 18 minutes of browsing time, doing absolutely nothing else. By opening task manager and completely ending the Dragon Center task, so it isn't running in the background, I increased my battery time to 4 hours of browsing time. At first I thought it might be my keys so I set it to Super Battery (which turns off the lighted keys). Did not help. So I checked to see what was affecting my battery life. Dragon Center appeared at the top. Shutting down Dragon center reset the battery life to nearly five hours, but I only got four hours out of it (I shut it down before it died, so maybe four hours and 15 minutes). This is light browsing: Amazon, eBay, reading articles, posting on couple of forums. Nothing that takes any real CPU processing power or RAM. Will update again once I have recharged and run the battery through some real work but wanted to post this in case anyone else had this issue and it could help.

Amazon Customer
3.0 out of 5 stars Booms like an Angel that's screaming from heaven
Reviewed in the United States on May 27, 2020
Style: 17.3"|RTX 2070 |i7-10750H|512GB NVMeVerified Purchase
A year ago I gave up my Monster Desktop that I used to multibox WoW with (10x accounts) and I've been looking for a new laptop that would better suit my new and very mobile life. I've always hated working with laptops but I figured I haven't owned a laptop in 8 years (been building my own desktops) I needed to give it a shot and its not like I can carry a desktop with me every where.

This laptop (17inch RTX 2070 ver) is pretty sick. Advanced Display settings confirm 240Hz Display. The display is very very bright. The Storage is more than enough for my Steam + Blizzard Games. WoW at Max (10) Settings looks like 105~ FPS and (9) looks like 145~ FPS, Tera Looks pretty, League of Legends looks... like League of Legends. I'm happy with almost everything in regards to this laptop, however this battery life is horrid. This laptop is so power hungry that even when its plugged in, it struggles to break even on the charge %. I unplugged this bad boy at 88% and played HEARTHSTONE for 50minutes and the laptop shut off. This MSI Dragon Center is already giving me problems just a week into using it. It actually wont launch properly anymore. It locks up on 'Waiting for SDK initialization', I'll have to look at that later. The software itself is pretty decent. Being able to adjust performance levels on the fly is nice. This laptop runs hot, but what gaming laptop doesn't? Overall I feel I got what I paid for, the battery life is absolutely terrible but I guess I can't really expect much from a gaming laptop. My games run nicely, the display is well lit, and the audio is actually pretty loud. The audio was the first thing that caught my attention when first booting as Cortana tried speaking to me, I literally jumped in my seat because it was so loud and when I tried to lower it I saw it was only at 50%! RGB keyboard is kind of silly and when I set the color to plain white it appeared to be a light blue instead, this fixed itself after rebooting. I am slightly bothered at the fact that there is no windows key on the left side but I'll get used to it. The spacebar also ignores taps that are too close to the edge of the bars. I also feel like the USB ports are very poorly placed in the middle of the right side, I tend to keep my mouse fairly close so sometimes I find myself hitting the end of the USB cable to my mouse with my thumb or even the mouse, itself.

CONS: **1HR~ BATTERY LIFE**, **Charging can hardly hold current % depending on usage**, Dragon Center can be quite the annoyance, No Windows key on left side, Space bar tends to ignore some taps that are too close to the edge, Poorly placed USB Ports, Warms up my cold drinks before I can fully enjoy them.
Read more

Nan
4.0 out of 5 stars Not as upgradable as it appears!
Reviewed in the United States on June 13, 2020
Style: 15.6"|RTX 2060 |i7-10750H|512GB NVMeVerified Purchase
BEWARE - it appears to be upgradable (ability to add a 2nd SSD), but the connector is not there. I bought this planning to add my 1TB SSD for additional storage so I wouldn’t need to carry an external drive around. Reviews and description made it look like this was possible. There is a slot for the extra SSD, they just didn’t add a connector. Since I opened it, I don’t think I can return for a different model, I would exchange for the 17” if that was a choice at this point. Besides that, it seems to be a good laptop, and is fast!
Read more