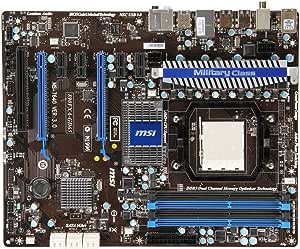 Visit the MSI Store
3.1 out of 5 stars 8 ratings
Currently unavailable.
We don't know when or if this item will be back in stock.
See more

3.1 out of 5 stars
3.1 out of 5
8 global ratings
How are ratings calculated?
To calculate the overall star rating and percentage breakdown by star, we don’t use a simple average. Instead, our system considers things like how recent a review is and if the reviewer bought the item on Amazon. It also analyzes reviews to verify trustworthiness.
Top reviews

Arcadian
5.0 out of 5 stars Built tough, reliable, runs cool, quality components, quality solder, stable overclock
Reviewed in the United States on July 12, 2011
Verified Purchase
After being taken for a two month ride with 3 flimsy, almost cardboard thin ASUS boards with broken solder and/or faulty hole plating issues that would practically fail just from looking at them, this MSI has left me in total shock but in a good way. With all these new trends leading most manufacturers towards 'planned obsolescence' and other dirty deeds, MSI's move of bringing back high-grade construction might as well be revolutionary act. It may not have the flashy look of some others boards, even though it does look extremely well made. But when it comes to getting things done consistently, even under stressful conditions, without failure, the MSI 890FXA does not **** around!

BOARD QUALITY
The board looks well built with a lot of attention to detail, including the excellent solder work. It's definitely thicker in appearance than other boards I'm used to seeing. It's also rigid enough to resist accidental bending (especially when mounting large CPU fans), at least enough to prevent components from stressing their solder joints (something hardly seen these days unless it's top dollar material).

TEMPERATURE
Component temperatures are roughly 30F lower (under heavy load) than the ASUS boards that died on me (in the same price range). Under severe load, with Prime95, the CPU and board components, including the PWM switching transistors and coils run just above room temperature. At worst, they might get slightly warm to the touch around 102F(external). The chipset also barely gets warm, giving out roughly the same external temperature. My main concern for keeping temperatures down is that as board components cycle from cold to hot and back to cold again over an extended period, they tend to end up with broken solder joints. This board so far seems immune to this.

SOUND CARD
There's no way to turn-off the device auto detection. It's really annoying swapping between multimedia speakers and headphones with realtek onboard sound, since they seem to get kind of glitchy, detecting headphones as either amplified speakers or a digital some device. Disabling rear device detection used to be the only compromise, but now the option has been removed on every new driver I've encounterd. The issue is with realtek, though. I've tried other motherboards with the same onboard sound finding the same exact problem.

RAID DRIVERS
Raid drivers for Windows 7 x64 only install if I disable digitally signed drivers prior to a Windows installation.

USB
The rear panel has 8 USB ports, but the onboard connectors only allow for 4 additional ports which might be a problem if one has several front panel accessories. The USB 3.0 works fine as far as can tell.

MEMORY CONTROLLER
Doesn't seem to allow 7-7-7 timings, only 8-8-8. Asus boards have no issues when it comes to handling 7-7-7 timings. I've seen this issue in the past and a simple BIOS update seems to be the only cure, most of the time.

DOCUMENTATION
The manual is vague and aside from the diagrams, it's practically useless. It's too heavy on abbreviations/acronyms and doesn't bother to define them. With regards to overclocking and manual memory settings, the BIOS settings can really seem non-conventional at times. Then again, I'm not used to dealing with MSI boards, only Gigabyte and Asus.

OVERCLOCKING
Excellent stability. Running a 3.4GHz Phenom II X4 965 Black at 4.0GHz and remains stable even at 120F internal case temperature (temperature was simulated with a heat blower attached to the case). Yeah, the CPU will go higher (around 4.3GHz), but I want absolute stability in practically any environment. One downside for those using refrigeration is the CPU voltage setting won't go past 1.5v.

It has now been a month since I got this board, and it has worked flawlessly with Windows 7 x64. I highly recommended it. Will definitely be buying more of these.

neXus
5.0 out of 5 stars Great board! Agressive and High Quality!
Reviewed in the United States on May 18, 2011
Verified Purchase
So, I wanted a MSI board because of their solid HI-cap capacitors as I've had a problems in the past with them bulging (you know what I mean) then your board will go out soon. The heat syncs on the board are fierce. The aggressive appearance of this board is amazing. It looks tough to me, and just looks right. The big heat sync reads MILITARY CLASS which is good if you want to gloat. Adds a sense of mystique to the board.

I also have a MSI graphics card. This card runs so cool, just like this board. The heat is never an issue for me.

I have a processor, 6 core 2.8 ghz AMD, and its overclocked to 3.5 GHz on this board. As well as my memory, bus speeds and what not. All this was done with OC genie. Its an auto overclock utility that finds the maximum bus speeds (in less than a minute). All this is done automagically so you don't have to fool around in bios rebooting then resetting bios. Most of the boards now have a failsafe if it doesn't boot to the amount of times you specify it will revert to default. This board also does that but with the OC genie, its just too simple and makes me a bit happy!

The core temps are what you need to look at if you overclock. My chip is reading 140 (it never goes past that) but I know the actual temp is 105 cause I reboot to bios and can verify this. But the core temps are real and they never get above 92F. Thats right, an overclocked 6 core never goes above 92 degrees Fahrenheit. Idle, it goes down to about 68.

This board is definitely worth the money. I'm a bit scared that they will now go to a different type (like am4 or something), but then after running some tests, i figured I'll be good on this for a long long time (as long as the software stays where it is for a while).

EXTREMELY STABLE!!!!!!!!!!!!!! Never had a BSOD or fail when using this board and overclocking. Previous boards, blue screens. No matter what I did to voltage.

This is my board of choice, I finally lucked out and bought the right thing.
Read more
6 people found this helpful
Helpful
Report abuse

TT3015
5.0 out of 5 stars Great, High Performing 890FX Motherboard!
Reviewed in the United States on October 20, 2011
Verified Purchase
At the time of writing this review it appears that the only reviews for the product are clearly employees of MSI boosting the reputation of this board. I decided to write a review from an actual buyer who has no affiliation with the company so here it goes.

While they were clearly biased I must agree with the majority of what they said. This motherboard has been better than I could have hoped for!

Here is what I have paired with the board:

I have been using it for several months and have no complaints!

I can play ANY game on max settings with very playable FPS.

Even after several months with these over clocks the board is rock solid. It overclocks well and is very forgiving when you push your overclock too far. It allows you to save multiple overclocking profiles to switch between so that if you find one that works you can save it before moving on to the next.

They say this works with AM3+ processors ie the bulldozer/FX line but I can not confirm this. AMD says that you need a 990 series board so some contradiction there.
Read more
2 people found this helpful
Helpful
Report abuse
See all reviews
Pages with related products. See and discover other items: socket 2011, AM3 Processors