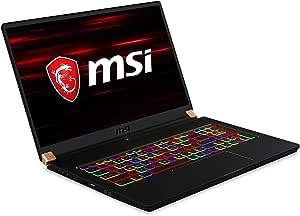 4.4 out of 5 stars
4.4 out of 5
101 global ratings
How are ratings calculated?
To calculate the overall star rating and percentage breakdown by star, we don’t use a simple average. Instead, our system considers things like how recent a review is and if the reviewer bought the item on Amazon. It also analyzes reviews to verify trustworthiness.

Jeffrey Miller
2.0 out of 5 stars Flimsy casing and screen - many other issues
Reviewed in the United States on May 6, 2020
Style: 17.3"|RTX 2070 Super|i9-10980HK|1TB NVMeVerified Purchase
I was so excited for this new laptop to replace my 5 year old MSI GE70. This is one of the most expensive options out there and my expectations were high.

Pros: I tested the new laptop for 48 hours including some intense games and the laptop performed well from a speed and video perspective. The new i9 gen 10 is super quick for OS boot and 32GB of RAM is amazing.

Cons:
- The case is very flimsy and creeks every time I pick the unit up. I do not expect so much flex that the laptop creeks from minimal holding. The screen/lid also seem flimsy and I worry about the screen cracking. Overall, I the build quality give me low confidence this laptop will survive what I put my GE70 through. It might last, but, for this price, I'm not willing to gamble. Compared to the durability of my GE70, this laptop feels cheap.
- Audio really lacks low end frequencies (bass). If you use headphones or external speakers, cool...but, the chassis has a large soundbar on it and I don't see the point of paying for that if it sucks.
- Fingerprints are ridiculous compared to other devices I have.
- The trackpad is off center of the keyboard making it a bit awkward to find a comfortable palm position.

Madd Maxx
5.0 out of 5 stars Mobile Power
Reviewed in the United States on July 8, 2020
Style: 17.3"|RTX 2080 Super|i9-10980HK|1TB NVMeVerified Purchase
My 2nd MSI laptop in 2 years, the first was thrown and broken...this machine is very powerful and has excellent graphics. The new wifi 6 is extremely fast I was getting 561mb\s down in the next room from the wifi router... absolutely insane wifi speed.

The cheapness everyone talks about is there...it is an ultra light gaming laptop mostly constructed of plastic...the device will creak and flex a little but the overall quality is outstanding the 300hz monitor is ridiculously fast. I don't regret my purchase and would recommend this device, if you're on the edge just pull the trigger you won't regret it.

After a couple of weeks I'm still moving this thing, under heavy load you will see thermal throttling on the cpu; however, it still performs fantastic! Buy it before they sell out.
Read more
26 people found this helpful
Helpful
Report abuse

LED nut
1.0 out of 5 stars Great company (Computer upgrade kings), serious heat issues (MSI problem).
Reviewed in the United States on June 18, 2020
Style: 17.3"|RTX 2060|i7-10750H|512GB NVMeVerified Purchase
I am glad that I bought it from CUK. They were wonderful, and fast at returning the purchase price and shipping a different computer to me (10 stars for them).
This thing could never be used for even simple low graphic gaming. Most gamer's, like myself use 1 or 2 external monitors, keyboards, and mice. There is no way to do this with this laptop. It has heat issues when the cover is up, and is exacerbated when the lid is closed. With it up, and not gaming just browsing the web, I would reach temps of 88 celsius (190 faren.) With it closed and browsing it would regularly reach 92c (197f). Water boils at 212f.
When I tried to run a medium sized game it would get up to 98c (208f), while I was idle. It went as high as 102c (215f), but would mostly thermally shut down before that.
Just as an FYI- I have a 5 fan cooling pad that was always set with all fans at 3300rpm. This made for an extremely noisy environment. I work IT. I can only imagine what someone who didn't know would do for this.
Again, buy from Computer Upgrade Kings, they are wonderful to work with. Just choose a different brand (my new Asus is working wonderfully).
Read more
21 people found this helpful
Helpful
Report abuse

Carol Hutchins
5.0 out of 5 stars Most powerful laptop I've ever used
Reviewed in the United States on May 19, 2020
Style: 17.3"|RTX 2070 Super|i9-10980HK|1TB NVMeVerified Purchase
I bought this computer mainly for business. I needed a good laptop for software development, CAD design, ect. It exceeded my wildest expectations of a laptop. I actually demoed a 6 thousand dollar lenovo workstation and this laptop just destroys them. The 300hz screen looks incredible. Even using excel looks so much better than any computer I have used. Yeah its pricey, but at that price tag you arent going to find a better computer. Even the most high end macbook on the market cant compete with MSI. 10/10 would buy 5 of them.
Read more
19 people found this helpful
Helpful
Report abuse

The Z Man
1.0 out of 5 stars Nice Idea, good looking, serious overheating, endless RMA
Reviewed in the United States on September 16, 2020
Style: 17.3"|RTX 2070 MAX-Q|i7-10875|512GB NVMeVerified Purchase
Product is really pretty
Day one we noticed this laptop gets loud real fast from a fan prospective.
The fans are so loud it drowns out the impressive built in speakers so headphone are required for any online PvP gaming.
After 15 minutes of gaming the frame rate dropped to 5-10 FPS. Either the computer freezes or restarts after a few minutes of really low FPS.
Games tried via Steam and all do not run for longer than 15 minutes
Borderlands 3
Assassins Creed Odyssey
7 Days to Die
Conan Exiles

During the last support call the laptop got so hot that you could not touch the keyboard/top speaker area, laptop shut down and would not turn on, even after an hour.

The slim form factor is really nice but comes at a cost, heat and fan noise.

MSI RMA is Easy
MSI's turnaround time was quick however the replacement motherboard ended up been DOA. Now back at MSI for diagnosis.
Ended up paying for shipping the device back to them twice, not a big cost as I'm not far from their CA location, east coast owners may see higher shipping costs.

MSI RMA is now really sad
Received the Laptop with loose keys, W key non functional, bent metal casing "from repairs" and a 1/4 x 3 dead "black" led strip on the screen, shipping box showed no signs damage. As the last support case, pre paid shipping was promised but never sent. At this point after so many people have opened it and has spent more time in repairs than been used, I'm expecting better options.

MSI RMA is now one of the worst I've ever seen.
When receiving the laptop back after the 3rd time, Windows had no permissions to download files, install games or applications. Could not even set to default MSI settings with their phone support. While working with a tech to restore the operating system, it got so hot you could not touch the power switch area, at this point the unit went into a loop in trying to "post". Back on the phone with tech support to RMA AGAIN. 4th time is the charm?

4th RMA
So after a long conversation with MSI support they decided to replace the computer entirely, same profile but ended getting better cpu, video card and HDD. (GS75 Stealth 10SGS-027)
Sadly even this simple swap they ended up getting wrong.
Power supply plug was to big to fit into the laptop.
going back for more support...
At this point we just want our money back as we have used it for 1 month and its been in for repairs going on 4 months so we are close to of 50% warrantee while the laptop is been repaired.

Replacement Laptop issues.
The new CORRECT plug power supply was shipped by MSI however it is a 180W power supply. Im reading that the 2080 GPU's need a 280W power supply.
It seems the newer Stealth series now has some protection and updates via the Dragon application. The machine can run quieter BUT this will cost you performance BIG time. The silent mode is for web browsing and watching tv, the END.
The replacement with a 2080 GPU was a "refurbished" computer and not net new, so no stickers and pretty box, just a computer. (for the guys this may be ok, my wife likes the bling)
However the replacement computer sound was really "tinny", for comparison we tested games and music against a Dell Precision 7710 and against a Latitude E7410 (mostly music for the E7410) the MSI Stealth was BAD.
connected a Logitech headset with USB dongle and sound was great.
This implies that the MSI computer speakers are damaged or the sound card is faulty. (Updated the Realtek drivers "MSI drivers" and ensured the Nvidia drivers were not trying to override the sound card). The speakers are loud make no mistake but sound really bad.
Opening up another support case with MSI...
Read more