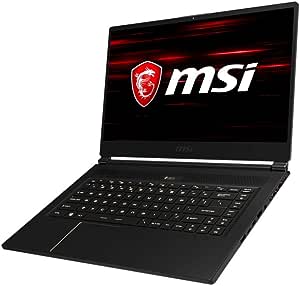 4.1 out of 5 stars
4.1 out of 5
373 customer ratings
How does Amazon calculate star ratings?
Amazon calculates a product’s star ratings based on a machine learned model instead of a raw data average. The model takes into account factors including the age of a rating, whether the ratings are from verified purchasers, and factors that establish reviewer trustworthiness.

Brian Ortiz
1.0 out of 5 stars The worst laptop that I have ever used in my life, just wow.
Reviewed in the United States on December 18, 2018
Style: GTX 1060 6G | 16GB | 256GB SSDVerified Purchase
I tried. I really did. I bought this laptop back in August, very eager to use what was, up to that point, the most high-end computing device I ever bought. And the most expensive. Little did I know that I would embark on an insane odyssey of stupidity and frustration.

To put it simply, the laptop started manifesting problems almost right away. The audio from the speakers would fade away as I would switch from earphones to the computer's native speakers. It just wouldn't produce any sound. I would roll back the drivers, update again, install new ones, pretty much every trick in the book, including a factory reset. And it would work, until it finally didn't. That's when things got nutty - the speakers went from no sound at all, to a garbled, tinny, reverbed, distorted mess. It was awful.

So I call up MSI customer support for a repair. Ok, fine. The Amazon return date was up? Not to worry - surely, MSI's warranty was beefy enough to match the price and brand prestige. I knew something was up when I called in to their support line and was asked to pay shipping. And yeah, the problem manifested AGAIN after the "repair." No sound, and then a garbled mess. I even did a factory reset, and the problem persisted. That should tell you the problem is with the hardware.

At this point, I am annoyed - I just spent more money on a computer than I ever did, and I was dealing with persistent, basic problems. So I asked MSI for a replacement. No can do. Warranty doesn't cover replacements. Only repairs. UGH.

I sent it back in, for a second repair. Guess what happened? The problem manifested AGAIN. This is a defective machine, period. But will MSI stand by their product and do the right thing, nope! Sorry - the warranty only covers repairs. And so, if we had it MSI's way, we would be caught in an infinite loop of problem-repair-problem-repair, for ever (or until the warranty runs out).

So let this be a lesson to all of you. Never buy MSI. Their policies suck, and their computers are lousy. I am stuck with $2000 paper weight, as far as I am concerned. I will have to look into some legal action. As a resident of California, perhaps the Lemon Law will protect me.

UndeniablyDubious
4.0 out of 5 stars I doubt you can find another gaming laptop this good
Reviewed in the United States on May 25, 2018
Style: GTX 1060 6G | 16GB | 256GB SSDVerified Purchase
I have now owned this laptop for about a month. I spent a long while looking for that holy trinity of gaming laptops: thin, powerful, and good battery life. I finally narrowed my choices down to this laptop or the GIGABYTE Aero 15X, but I decided on the MSI because I was more wary of the GIGABYTE brand. My last laptop was probably twice as heavy and had been worn out so badly that the moment it was unplugged, it would die, so this is quite a step up. Unboxing the laptop and setting it up, I was very impressed and found myself wanting to figure out all the quirks and features this thing has. After a month or so of use, here are the main things everyone should know about it...

Pros: Extremely thin and light! I was very happy with the size, which is considerably smaller than my previous HP Pavilion, and probably half the weight. However, despite being light, the weight is proportioned perfectly. When using one hand to open the laptop, the bottom is heavy enough to not be lifted up with the screen.
Design! Not going to lie, the gold bezel is pretty snazzy. It's sleek and looks even spiffier than a MacBook. I also prefer the gold MSI dragon emblem to a backlit one.
Specs! This is my first gaming laptop, and it plays all of the titles I want without any issue. I'm not super picky about all the details, but it's a quality setup. You can play probably just about any of your favorite games on standard or even highest settings no problem!
Speed! This is a beast of a laptop. Maybe it's because I haven't gotten a new laptop in a while, but from a complete shutdown to completely on, it's maybe 10-20 seconds. That's quick in my personal experience. Everything goes from black and dead to 100% in a very short amount of time!
Settings! You can easily adjust most of your settings from Dragon Center; fans, color/display, keyboard. FN will also highlight some easy, quick selections like keyboard colors, opening Dragon Center, disable trackpad, screen display, webcam, etc.

Cons: Keyboard! This is just a personal nitpick, but the font of the keys looks like the 2002 Spider-Man Movie font. The backlit RGB keys are a cool feature, but one I haven't used much so far.
Speakers! I'm not sure if it's just mine, but the speakers occasionally don't work without headphones unless I shutdown and restart.
SSD Size! I got the 256GB version. I probably should have looked into it more, but the 256GB is essentially split in half between writeable date (c:) and backup (d:). So you really only have about 150GB at default. I will edit my review if I can figure out how to change the hard drive partitions, or upgrade the SSD.
Throttling! Once you hit about 30% battery life, a AAA title (in my case, Batman: Arkham Knight) on the highest settings will start throttling majorly. Lots of lag and slow response from the computer. However, the moment you plug it back in, your game will be back to its visually stunning, 60fps self. So far, it hasn't been an issue, but just don't expect to be gaming for 5 hours straight on this thing.
Fans and heat! Thankfully you can choose your options for how loud the fans can be, but if running a AAA title, you'll probably want to set it to "Cooler Boost," which is incredibly loud but keeps your laptop at a decent level of heat (65 C on average). Still, it's a little off-putting when you have your game drowned out by the sound of a noticeably loud whirring of laptop fans.

Overall, I am pretty satisfied with my purchase. $1,800 is a good amount of money, but I do believe it will last me a while and I will get plenty of use out of it. Just be wary of the storage, since you'll either want to get the 512GB model for $300 more, or install 1TB SSD yourself for $250. Most of the things I mentioned I can get over, but this is obviously not THE perfect laptop. You're still getting great value for your money!
Read more
210 people found this helpful
Helpful
Comment Report abuse

Katherine Garcia
5.0 out of 5 stars Ditched Apple for this PC--WELL WORTH IT
Reviewed in the United States on July 9, 2018
Style: GTX 1060 6G | 16GB | 256GB SSDVerified Purchase
Computer is thin, light, and beautiful. Super fast and gaming is a breeze. I consider myself a light gamer, playing simulation/ world building/management games like Cities Skylines, Tropico 5, Sims 4/3, Project Highrise & this computer takes everything you throw at it. My husband also steals it for PUBG and says it runs exceptionally well (he really likes the 144 hz refresh rate).
(It can get hot when playing, but I keep it on a desk at all times on top of this cooling pad and it really helps to keep it cool: https://www.amazon.com/gp/product/B00NNMB3KS/ref=oh_aui_search_detailpage?ie=UTF8&psc=1 )

The two con to me are the speakers and the build quality around the power button. I'm ok with the speakers not being great since I mostly plug in headphones.
Read more
89 people found this helpful
Helpful
Comment Report abuse
See all reviews from the United States

Amazon Customer
1.0 out of 5 stars Lots of problems and slow customer support
Reviewed in the United Kingdom on May 17, 2020
Style: GTX 1070| 32GB| 1TB| Win 10 ProVerified Purchase
I have now run into a fan noise issue twice with this machine. The keyboard backlighting is also not working as expected for some keys (red and green dead)!

The support takes weeks in the best case. I thought MSI had a good reputation for hardware, but this machine has proven me wrong.
Read more
Helpful
Sending feedback...
Thank you for your feedback.
Sorry, we failed to record your vote. Please try again
Report abuse

Amazon Customer
5.0 out of 5 stars MI GS65 👍
Reviewed in the United Kingdom on May 18, 2019
Style: GTX 1060 G6 |144hz|i7-8750H|16GB|512G NVMeVerified Purchase
Very good gaming laptop - got this for my son and he is very happy with it .
Read more
Helpful
Sending feedback...
Thank you for your feedback.
Sorry, we failed to record your vote. Please try again
Report abuse

Page 1 of 1 Start overPage 1 of 1
This shopping feature will continue to load items when the Enter key is pressed. In order to navigate out of this carousel please use your heading shortcut key to navigate to the next or previous heading.
Back
Next
Pages with related products. See and discover other items: 8th gen intel laptop, laptop with i7 processor, ultra-thin laptops, fortnite keyboards, 2018 Alienware Gaming Laptops, The Best Gaming Laptops