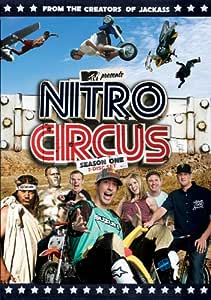 Share
STREAM ANYTIME with Prime Video from $16.99
Have one to sell?
Sell on Amazon

Jackass producers Jeff Tremaine, Johnny Knoxville, and Trip Taylor team up with Travis Pastrana, Gregg Godfrey, and Jeremy Rawle to deliver the first televised season of Nitro Circus on MTV. Travis Pastrana, legendary freestyle motocross pro and nine-time X Games gold medalist, has built an empire (not to mention his own private playland) doing the previously thought to be impossible and almost always unadvisable. Whether it is jumping out of an airplane without a parachute or being the first rider to ever double back-flip a motorbike, Pastrana knows no bounds. Joining him on this latest stunt-fueled fest of bad ideas and good times are childhood friend and pro mountain biker Jim DeChamp, washed up pro motocross rider and loud-mouth Andy Bell, pro motocross racer Jolene Van Vugt, professional skier/base jumper Erik Roner, and husky construction worker/stunt dummy Streetbike Tommy. Together, the tightknit crew’s hilariously intense and irrational rivalries make Nitro Circus the most entertaining trainwreck of a show to slam onto the television airwaves in years.

-All 12 Season One Episodes plus over two and a half hours of Special Features including:

-Over 25 minutes of Never-Before-Seen Bonus Stunts

4.7 out of 5 stars
4.7 out of 5
174 global ratings
How are ratings calculated?
To calculate the overall star rating and percentage breakdown by star, we don’t use a simple average. Instead, our system considers things like how recent a review is and if the reviewer bought the item on Amazon. It also analyzes reviews to verify trustworthiness.
Top reviews

Alex Mendoza
5.0 out of 5 stars I like it
Reviewed in the United States on November 17, 2020
Verified Purchase
Good series.
Read more
Helpful
Report abuse

VonRae73
5.0 out of 5 stars Five Stars
Reviewed in the United States on May 31, 2017
Verified Purchase
Love to what Nitro Circus, always give me entertainment!!!
Read more
Helpful
Report abuse

Matt
5.0 out of 5 stars 100% entertainment
Reviewed in the United States on December 27, 2011
Verified Purchase
If you watch this end to end, you will be entertained! There are some silly parts, plenty of parts that make you say WOW and a few suspenseful parts, but in the end you've got a lot of entertainment that you will be watching more than once!
Read more
Helpful
Report abuse

This DVD is a 2 disc set (not 1 as stated by Amazon), contains all episodes of Season 1 (12 Episodes) and has a running time of 283 minutes (nearly 5 hours!). There are also 25 minutes of bonus content. For the price this is a real steel!
Read more
4 people found this helpful
Report abuse

Viking_Ma
5.0 out of 5 stars Mad bunch of 20 yr olds doing crazy stunts BMX/ motorbikes/ parachuting
Reviewed in the United Kingdom on May 28, 2018
Verified Purchase
Would be loved by any kids like 9+ upwards lots of reckless stunts being done by professionals in biking/skateboarding/parachuting but language so would recommend 9 and over really.
Interesting to see Travis Pastrana's house and how he practises.
Read more
Report abuse

leejane
5.0 out of 5 stars Great
Reviewed in the United Kingdom on October 26, 2020
Verified Purchase
Great thanks
Read more
Report abuse

Mr. Joel S. Greenhalgh
5.0 out of 5 stars Awesome Stunts by the Craziest stunt team on the planet!!
Reviewed in the United Kingdom on December 1, 2013
Verified Purchase
As an avid fan of Travis Pastrana and having all the Nitro Circus DVD's, this was a must have, its essentially a compilation of crazy stunts by the Travis and his crew, for any fan of Jackass or Travis, this is a must have!!
Read more
Report abuse
See all reviews
Pages with related products. See and discover other items: mtv tv shows, mtv reality tv shows