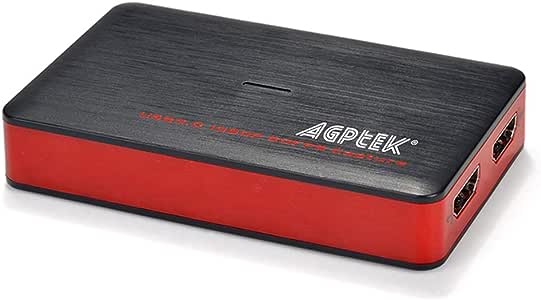 3.6 out of 5 stars
3.6 out of 5
186 customer ratings
How does Amazon calculate star ratings?
Amazon calculates a product’s star ratings based on a machine learned model instead of a raw data average. The model takes into account factors including the age of a rating, whether the ratings are from verified purchasers, and factors that establish reviewer trustworthiness.

Joseph Matthews
5.0 out of 5 stars I took a gamble, and it paid off. This is an excellent device.
Reviewed in the United States on September 13, 2017
Verified Purchase
I think that most people would buy this device for gaming, such as Let's Plays, and game reviews. However, I took the chance on this capture card for camcorders. Before I was using an Elgato Game Capture HD and I did not like the delay, and it only worked with the included software (which is not that good) Other options were too expensive.

I found this device for $89.99 here on Amazon, and honestly, I was nervous that I may had brought the wrong product, as I bought two of them. The devices came in a small box and the device itself is about a big as a cigarette box.

I opened it up, plugged in it to my USB 3.0 port (You need USB 3.0), and immediately, the drivers loaded by default.

Now, this is where it gets interesting. I opened up Skype and did a test video. Skype recognized the device as a WEBCAM. This means, for $89.99, you can take your lowly camcorder (or high end camcorder) and literally use it as a webcam in your software. The audio from the HDMI is based on what is connected to your camcorder, so in my case, I have a dynamic mic, plugged in with an XLR female to 3.5mm male, connected to a Canon Vixia HF R600, and I am talking to people on Skype.

I also tested the device with Powerdirector 14 (video editing software), and it did show up as a device. Same with Manycam, and other software.

This gives me a lot of options to use for broadcast in 1080P 60fps. You can also record in 720p, or really any resolution you want up to 1080p. The capture card also has HDMI out, as a passthrough so if you are gaming, you can watch your game thru that, while your recording.

Now, I suspect that a lot of people after reading this review so far are wondering about using a DSLR or Mirrorless camera, like a Canon Rebel T5i/T6i etc. You mileage will vary, but I did test this with a Canon Rebel T5i. It does work. However, many DSLR's DO NOT have a clean HDMI out, like almost all camcorders, so you will get overlays from the screen. Hacks like the Magic Lantern can help alleviate this problem, but only on some DSLR's. The other issue people may come up against is if multiple AGPTek capture devices can work. Technically they can, as I am using two of them, but you have to check the ports on your desktop/mac/laptop. For best results, make sure the devices are on different root ports.

What this AGPTEK HDMI Game Capture Card does not have is an audio input. You can work around this easily by getting an audio interface to connect your software your recording on or you can utilize the mic input on your camcorder, using a mixer for voice overs or music.

Overall, the device is great. The audio sounds great, and not too overly compressed thru HDMI, it can bypass HDCP (as described), the delay into broadcast video switching software is very minimal, it has a HDMI out for you to connect a LCD screen to monitor what you are doing, such as for gaming. The cost is cheaper than the Elgato CamLink ($129) and the Magewell. ($299.00). The capture card does not overheat neither so it seems it can be ran for extended periods. Lastly it loads as a generic WEBCAM driver so you can use Skype or Google Hangouts with it.

Excellent device...and I bought two. May need to get one more.

LoneKiltedNinja
4.0 out of 5 stars Surprisingly performant for the price
Reviewed in the United States on September 7, 2018
Verified Purchase
The AGPtEK USB3.0 HDMI capture box only does HDMI, is cheap, and may not be top-tier on quality, but it outperforms some of its more prominent competitors in a variety of useful ways:
- unlike the StarTech USB3HDCAP, it's compatible with MacOS
- unlike the BlackMagic USB3/Thunderbolt Shuttle, it does not require a bundle of useless bloatware, instead working straight out of the box with GameShow and likely other capture software
- also unlike the BlackMagic USB3/Thunderbolt Shuttle, it (a) can auto-detect the input signal format and (b) can work with SD timings from a broad range of vintage video sources, such as classic game consoles (through an upscaler, including/specifically, an OSSC, sold separately)
- tangentially, unlike any less expensive device I read up on, it can capture resolutions below 720p, full-stop. Don't get burned by cheap-o "camcorder capture" dongles that explicitly cite 720/1080 compatibility if you know you'll need SD as well.
- unlike cheaper capture dongles, the StarTech USB3HDCAP, AND the BlackMagic Shuttle, it has low-latency pass-thru that continues to function so long as the box has power, not simply when it is capturing (so e.g. you don't need to rewire your setup to play a game without streaming it, and you don't need to play your game on the capture itself, which is lagged by a few frames)
Now, before buying, I did read one complaint about color fidelity, and having been alerted to look for it, I can now see the captured image does not 100% match the image displayed on a TV from the pass-thru. This was not, however, something a very few degrees of post-process hue adjustment and a tiny contrast boost could not mask decently well. I also noticed some very subtle diagonal banding, but could not swear this wasn't in my source feed. If you're in professional media you'll probably want better, but for gaming, I see no issue.
For a device that otherwise looks to be the bottom of the barrel on price, I honestly expected a lot less, and am more than satisfied with what I got.
Read more
24 people found this helpful
Helpful
Comment Report abuse

NORMARN
5.0 out of 5 stars The price is so good you cannot miss something like this that it's under ...
Reviewed in the United States on March 14, 2018
Verified Purchase
I received this capture card on March 11th 2018 and I could tell you that this is one of the coolest card I ever use for capturing games.

1. The price is so good you cannot miss something like this that it's under $100.

2. It's right out of the box it works perfectly fine I tried it on my Windows 10 but for some reason the OBS was giving me a weird video glitch when I use the capture card and it was pretty annoying.

So I loaded Linux Mint and it work Flawless no problem no issue OBS end up seeing everything from that operating system and everything work 1080p at 60 frames you have to set it for 60 frames or otherwise it will stay at 30 that is both your capture card and you have to go to the OBS settings to enable 60 frames as well.

I will come back and make a video so you can see the results what I did to set this up I also purchased another item from Amazon was a plug-and-play microphone setup which I was able to plug it in and Linux was able to pick that up so technically my streaming looks professional.

I can understand the one guy who has a video up did a review on this product is very upset and it's understandable. But one thing's for sure this is not a fake product it does exactly what is advertised not misleading.

If you want proof find me at the mixer.com. you can find me under the name Nervusbreakdown and see my latest stream they that's using the capture card at purchased.

If there's any question or try to understand this product please ask me and I'll be more than happy to help you can find me at mixer or Xbox Live with the same username.

Here is my video on this product and I am using my wife account to do the review.

jason
2.0 out of 5 stars Just Get an Elgato
Reviewed in Canada on December 10, 2018
Verified Purchase
The product works great, you know once you install an updated driver that requires a lot of googling to get. Other than that it’s great... don’t really recommend it though.
Read more
Helpful
Sending feedback...
Thank you for your feedback.
Sorry, we failed to record your vote. Please try again
Report abuse
Load more international reviews

Maurice Quizon
1.0 out of 5 stars good video quality
Reviewed in Canada on November 5, 2018
Verified Purchase
easy to use very slow and laggy
Read more
One person found this helpful
Helpful
Sending feedback...
Thank you for your feedback.
Sorry, we failed to record your vote. Please try again
Report abuse

Page 1 of 1 Start overPage 1 of 1
This shopping feature will continue to load items when the Enter key is pressed. In order to navigate out of this carousel please use your heading shortcut key to navigate to the next or previous heading.
Back
Next
Pages with related products. See and discover other items: Best Rated in Internal TV Tuner & Video Capture Cards, usb tv tuner, xbox capture, tv tuner for pc, xbox 360 component cables, window pc tuners