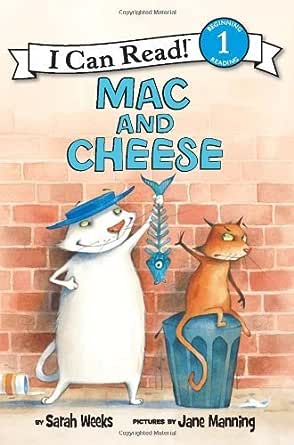 You've subscribed to I Can Read Level 1! We will preorder your items within 24 hours of when they become available. When new books are released, we'll charge your default payment method for the lowest price available during the pre-order period.
Update your device or payment method, cancel individual pre-orders or your subscription at
Your Memberships & Subscriptions 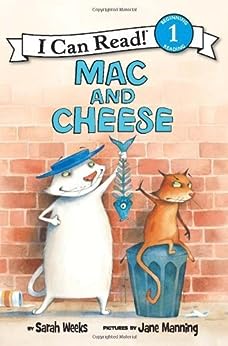 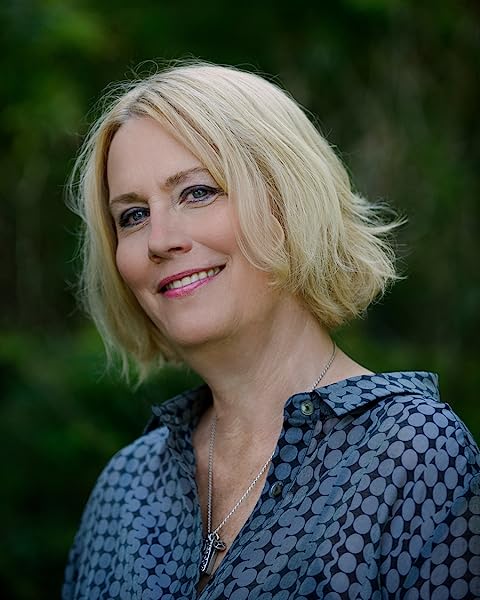 Mac and Cheese (I Can Read Level 1) Kindle Edition 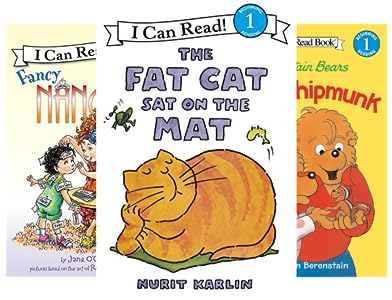 K-Gr 1–Macaroni and Cheese may be best friends, but the two street cats couldn't be more different in their likes and dislikes. A day in his paw prints reveals that Macaroni will eat anything and simply loves "bouncing, pouncing, flipping." Puzzled, he levels with his friend–"I like to flip and skip and sing, but Cheese, you don't like anything." Quiet and fastidious Cheese truthfully replies, "The only thing I like to do is sit here quietly with you." As an errant gust of wind steals Mac's very blue and very flat hat, Cheese proves he's more than a do-nothing grump in order to get it back. This book is a Level 1 addition to the series. Correspondingly, the simple sentences with ample white space suit the brief snippets of rhyming dialogue between the two characters, and brightly colored watercolor illustrations of the feline alley friends reveal expressions ranging from Mac's sheer glee to Cheese's exasperated disgust. Simplicity of text, action illustrated to lead readers in turning the page, and a satisfying conclusion makes this easy reader a solid selection for all libraries.Mary Elam, Learning Media Services Plano ISD, TX
© Copyright 2010. Library Journals LLC, a wholly owned subsidiary of Media Source, Inc. No redistribution permitted.

Cheese, a scrawny, fussy, sedentary cat, can’t be bothered to chase a mouse, while Macaroni is a cheerful, active, rotund feline who enjoys a good chase, not to mention singing, jumping, playing, bouncing, pouncing, flipping, and skipping rope. The two cats have little in common but affection for each other; that they have that in spades, as Cheese proves by springing up to retrieve Mac’s hat when the wind blows it away. With short sentences and words, this addition to the venerable I Can Read series falls near the easier end of the beginning-reader scale. Even the name Macaroni is quickly shortened to Mac. Although the idea of two good friends with opposite characteristics is nothing new in books for beginning readers, this book offers a rhyming text with some nice turns of phrase as well as appealing, stylized illustrations. Grades K-2. --Carolyn Phelan

When Macaroni sings a song,
Cheese will never sing along.
Mac likes to jump and play and sing,
But Cheese does not like anything.

Macaroni and Cheese are best friends, yet they couldn’t be more different! Mac likes to pounce and bounce and jump, but Cheese just sits there like a lump. But when Mac runs into a problem with a gust of wind, Cheese stops being a grumpy grump long enough to help save his friend’s favorite hat. Written in the style of P. D. Eastman’s classic Big Dog . . . Little Dog, this modern-day alley-cat odd couple will delight beginning readers.

Sarah Weeks is an author, singer, and songwriter. Her many books for children include the My First I Can Read Book Splish, Splash!, illustrated by Ashley Wolff, Mrs. McNosh Hangs Up Her Wash, illustrated by Nadine Bernard Westcott, and the middle-grade novel regular guy. Ms. Weeks lives in New York City.

4.8 out of 5 stars
4.8 out of 5
1,229 customer ratings
How does Amazon calculate star ratings?
Amazon calculates a product’s star ratings based on a machine learned model instead of a raw data average. The model takes into account factors including the age of a rating, whether the ratings are from verified purchasers, and factors that establish reviewer trustworthiness.

Marsha R.
5.0 out of 5 stars Mac and Cheese Makes Reading Fun for You & Kids!
Reviewed in the United States on March 15, 2017
Verified Purchase
Love reading to my grandchildren but have found that those grandchildren who are learning to read are particularly eager to read to me. l have several beginner's level reading books but always on the lookout for more. Most recently purchased Mac and Cheese based on it's great reviews. In a matter of a few weeks this book has been read to me dozens of times....sometimes in one sitting. As a rule when "listening" to one of my beloved new readers "reading" me the same story over & over again I am secretly making grocery shopping lists in my head. NOT this book! Children & I both really enjoy this comical story!
Read more
60 people found this helpful
Helpful
Comment Report abuse

scarlet
4.0 out of 5 stars Another great level 1 I Can Read Book !!
Reviewed in the United States on October 21, 2018
Verified Purchase
This I Can Read Level 1 book of "Mac and Cheese " is a great book about a mouse named Mac and his love for cheese. An interesting story for beginners with entertaining pics and very helpful for boys and girls starting out.
I Highly recommend buying this as a gift for the special children in your life. It is sure to be one of their favorites !!

Eric K. Holmes
5.0 out of 5 stars Great for Kids and you won't hate reading it 50 times.
Reviewed in the United States on May 2, 2018
Verified Purchase
This is one of my 3-year olds favorite books and one of my favorites I get to read to him. Very cute, clever book. Doesn't get old.
Read more
18 people found this helpful
Helpful
Comment Report abuse

Amazon Customer
5.0 out of 5 stars Son loves it
Reviewed in the United States on September 1, 2017
Verified Purchase
My son loves mac and cheese which got him initially interested. Even though it obviously isn't a bowl of mac and cheese it was funny to him to see the cats with the names. He loved it and is catching on to words.
Read more
22 people found this helpful
Helpful
Comment Report abuse

BIGDADDY RB
5.0 out of 5 stars Who doesn't love Mac and Cheese?
Reviewed in the United States on January 18, 2018
Verified Purchase
Who doesn't love Mac and Cheese? Arrived in perfect condition. Yet another winner, says my granddaughter. Let's face it, her review is what really counts!
Read more
14 people found this helpful
Helpful
Comment Report abuse

Dayfam
5.0 out of 5 stars Cute Book
Reviewed in the United States on January 3, 2018
Verified Purchase
This is one of my 4 year olds favorite books. Very cute.
Read more
15 people found this helpful
Helpful
Comment Report abuse

Natalia
5.0 out of 5 stars Great story
Reviewed in Canada on May 8, 2020
Verified Purchase
Sometimes we read it 3 times in a row
Read more
Helpful
Sending feedback...
Thank you for your feedback.
Sorry, we failed to record your vote. Please try again
Report abuse