The Machine in the Garden: Technology and the Pastoral Ideal in America 35th Anniversary Edition, Kindle Edition 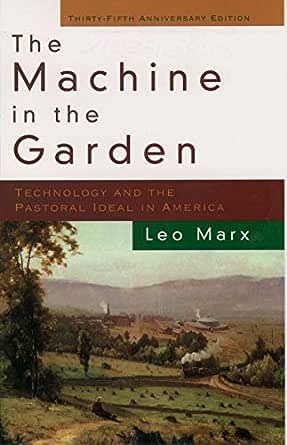 Flip to back Flip to front
Audible Sample Playing... Paused   You are listening to a sample of the Audible narration for this Kindle book.
Learn more
ISBN-13: 978-0195133516
ISBN-10: 019513351X
Why is ISBN important?
ISBN
This bar-code number lets you verify that you're getting exactly the right version or edition of a book. The 13-digit and 10-digit formats both work.


Praise for the previous edition: "An exciting book, exemplifying studies in American culture at their best."--Hennig Cohen, Saturday Review
"The thesis of this impressive book is important, and Professor Marx has found a wealth of material to support it."--American Historical Review
"This is an important contribution to our understanding of some of the enigmas and conflicts at work in the American imagination, particularly in the nineteenth century."--Tony Tanner, Encounter
--This text refers to the paperback edition.


Leo Marx is Professor Emeritus of the Program in Science, Technology, and Society at the Massachusetts Institute of Technology.
--This text refers to the paperback edition.

Paul Krause
5.0 out of 5 stars Will the Real America Please Stand Up?
Reviewed in the United States on July 8, 2020
Verified Purchase
Leo Marx was one of the last great "Myth and Symbol" critics in American culture and literature. The Myth and Symbol School of criticism -- which I myself largely belong to in my own professional and public writings -- can be summarized as such: Stories (myths) follow a certain pattern of development from beginning to end and are replete with common symbols, archetypes, and motifs, etc. that convey meaning to the reader. Unlocking these symbols is essential to understanding the "myth" of stories. This is also applicable to film, etc.

Marx contends that one of the great myths and symbols of American literature and culture is the symbol of the garden over and against "the machine" (the railroad, the urban metropolis, the factory, etc.) which brings poison and corruption to the virgin land of nature. Thus we have the beginnings of the quintessential dialectic that even informs American politics: the noble and honorable little man, the farmer, or the pioneer standing against the evil capitalist, railroad baron, or land speculator, etc. Anyone who has watched Kevin Costner's Dances with Wolves will even notice how the Machine and Garden Myth and Symbol influences that film story: Kevin Costner's Lt. Dunbar is the "Nature Man" who wants to return to the simplicity and wholesomeness of the natural way of life (represented by the Sioux) while being threatened by the forces of civilizational progress/destruction (the white settlers, hunters, and soldiers). It's the same trope replayed for us.

Starting with Virgil and Shakespeare and running through classics of American literature all the way up to "The Great Gatsby" by F. Scott Fitzgerald, Marx shows how Western culture has a pervasive consciousness of the "pastoral idyll" and how it exploded with energy and fruition in the North American context. Our yearning for a simpler time, the "true America," and an un-corrupted land not tainted by big business, etc., all reflect this Garden Mentality under siege by the Machine.

However, is the pastoral idyll the real America and the real American dream? Even in the early days major cities were the dominant forces of politics: Boston, New York, etc. Urban men led the Revolution. Urban men fueled Manifest Destiny and the linking of the continent between Atlantic and Pacific Oceans. Yet the allure of the pastoral idyll remains strong. We have a natural tendency to sympathize and empathize with the "little guy," the "farmer," or the "rural patriot." We have a natural tendency to be suspicious to men in suits, men from cities, and their big business attitudes.

Marx, however, also thinks that romanticizing the pastoral idyll is a dead end for politics and culture. It refuses to come to grips with the reality that we are no longer a pastoral and rural society; that we have become what we most feared: an urban, industrial, capitalist society. What are we to do? The artist, Marx says, points his finger on a pressing problem and brings it to life for us. Thus we see, even in F. Scott Fitzgerald, the great author highlight materialist excess and emptiness in his work. Yet retreating back to the old America (the rural America) is "reactionary." It refuses to accept what the forces of progress have wrought. Artists highlight our problems. But politics, Marx argues, is the only legitimate avenue for redress.

Marx combines literature, culture, and politics in a great study of American literature that rivals RWB Lewis' "The American Adam." In "The Machine in the Garden," Marx draws out for us how American culture has been divided between naturalistic romanticism and simplicity vs. industrial progress, urbanism, and chaos. One can look further into film to see how this Natural Simplicity vs. Technological Destruction is apparent. James Cameron is the great Machine and Garden film maker. Take Terminator, for example. The bad guys are the Terminator Machines. Skynet. Corporate Greed. Or take his spectacular film Avatar. Pandora is the Garden. The RDA the Machine. Go back to a lot of sci-fi films and stories and you see this Myth and Symbol all over the place.

Leo Marx's book is a great introduction to the pastoral idyll in Western literature (beginning, he argues, with Virgil -- though I would contend we also find it in the Bible and Homer) and how it really comes to fruition in the American context. It should be read with RWB Lewis' "The American Adam" which is another "Myth and Symbol" book that adds to the richness of American literature and story-telling. One will be thankful for reading Marx and opening a whole new level and world of interpretation and meaning to so many classic American works and also opening the reader to how this simple Myth and Symbol of the Garden under siege by the Machine continues to be seen in contemporary film. That, however, the reader will have to draw out from having read Marx. But if you do so, it becomes easy to do.

S. Pactor
5.0 out of 5 stars The Conflict between Pastoralism and Industrialization
Reviewed in the United States on September 26, 2003
Verified Purchase
In writing this review I am attempting not to duplicate the excellent review by panopticonman below. Thus, I would refer all readers of this review to that review.
Marx's thesis, roughly stated, is that: Americans applied idea's developed about landscape in the old world to the landscape they discovered in the new world. In doing so, the landscape became a "repository of value" (value meaning economic, spiritual, etc.). The main idea about the landscape that travelled with them from Europe was the idea of "pastoralism".
Pastorialism, roughly expressed, represents the yearning by civilised man to occupy the space in between "art" and "nature". Marx does an excellent job of explaining the pre-modern understanding of "art" (which is different then our modern understanding of the word). Marx also distinguishes the a "simple" conception of pastoralism with a "complex" conception. Using the writings of Jefferson, Marx argues that Americans were more comfortable with the idea of a "complex" pastoralism that acknowledged the conflict inherent in the occupation of a "middle landscape" between art and nature.
Marx then attaches the concept of pastoralism to the symbol of the "garden" as representing a mediating space between art and nature (apply "arts" to "nature" and produce a garden).
After a further differentiation between the idea of the garden-as-continent vs. garden-as-garden, Marx moves on to the idea of the "machine".
What Marx means by the "machine" of the title is a relationship between culture and industry that was irrevocably altered by the industrial revolution. He details the attempts by writers to deal with the looming conflict between pastoralism and industrialization. Perhaps the most interesting portion of the book comes when Marx discusses the period when many saw NO conflict between the "machine" and the "garden".
However, the tour de force comes when Marx analyzes this conflict as it appears in the works of Emerson, Thoureau, Hawthorne, Melville and Fitzgerald.
Personally, I thought the analysis of Hawthorne's "Ethan Brand" was first rate.
Marx concludes by congratulating the authors he uses for "clarifying" the situation of Americans and noting that the ultimate resolution of the problem of the machine in the garden is not for writer's but for politicans.
In this way, the book is significantly more political then one might expect. It really belongs to the genre of "American Studies", even though my 1970's edition refers to it as belonging to "Literature".
Marx achieves greatness by tenaciously explpicating the troubled relationship between America and its technology. Although written in 1964, this book retains great relevance.
I highly recommend "The Machine in the Garden".
Read more
48 people found this helpful
Helpful
Report abuse

Johnny
4.0 out of 5 stars Solid and classic
Reviewed in the United States on August 17, 2019
Verified Purchase
I wasn’t expecting a chapter on the Tempest, which I guess is a kind of fantasy of the America’s, but overall a good book.
Read more
Helpful
Report abuse

scholar
5.0 out of 5 stars A great book
Reviewed in the United States on February 27, 2016
Verified Purchase
One of the best achievements of American Studies. This work has had a powerful impact on the way American culture is perceived.
Read more
3 people found this helpful
Helpful
Report abuse

Michael D Farrel JR
5.0 out of 5 stars pastoral myth manifested within lit & hist
Reviewed in the United States on January 9, 2013
Verified Purchase
Read this book for supporting research in my MFA thesis. I have been writing about the ways that industrialization has changed visual art in regards to man's placement within the landscape, American wilderness mythology, and how these ideas are manifested within the parks system and museums. This text was a great resource. Well written, logical organization, and fairly easy to digest.
Read more
2 people found this helpful
Helpful
Report abuse

David Kahler
5.0 out of 5 stars Five Stars
Reviewed in the United States on May 31, 2015
Verified Purchase
Excellent
Read more
Helpful
Report abuse
See all reviews
Back to top
Get to Know Us
Make Money with Us
Amazon Payment Products
Let Us Help You
EnglishChoose a language for shopping. United StatesChoose a country/region for shopping.
© 1996-2021, Amazon.com, Inc. or its affiliates