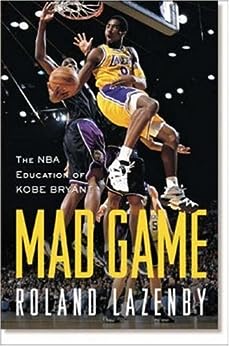 "...the writing is sharp, and it's clear Lazenby knows his stuff. "Mad Game" creates an image of a young player whose determination leaves him aloof, whose lack of a college experience deprives him of some necessary team skills and whose playground style frustrates his teammates." -- Washington Times

"Subtitled The NBA Education of Kobe Bryant, the 313-page biography is proof that there is no such thing as a charmed life...Lazenby's book makes startlingly clear Bryant, 21, also is like you and me, tiptoeing around hostile co-workers and getting blamed for every little thing that goes wrong on the job and knowing at least one of the smiling faces he sees every day is trashing him behind his back." -- LA Daily News --This text refers to an out of print or unavailable edition of this title.

In Mad Game, Roland Lazenby explores the world of Kobe Bryant, who, at 23, is already a seasoned NBA veteran and the owner of two championship rings with the Los Angeles Lakers. Yet the road to glory has not been an easy one for Bryant. It has taken his iron will and enormous self-assurance to battle elements both within the NBA and on his own team that could force him to reshape his dreams of being number one, of being "The Man."

When the 17-year-old phenom left high school in 1996 to join the glitzy Los Angeles Lakers, Bryant faced a wave of media hype declaring him the next Michael Jordan. Mad Game is the story of how these circumstances propelled his rapid rise through the NBA, only to result in conflict with--and, at times, alienation from--his veteran teammates.

A cautionary tale emerges from the hard lessons Bryant learned along the road to NBA stardom. Yet this is also a story of triumph, of a uniquely gifted young athlete with an uncanny, instinctive feel for the game who matures as a player while trying to remain true to himself. In this updated paperback edition, Lazenby adds new material on the continued rise of Bryant through the 2000-2001 season, including his on- and off-court clashes with Shaquille O'Neal and how their conflicts nearly cost their team the NBA championship. --This text refers to an out of print or unavailable edition of this title.

Roland Lazenby (Roanoke, VA) is the author of numerous sports books, including Blood on the Horns: The Long Strange Ride of Michael Jordan’s Chicago Bulls and Bull Run!, the Independent Publishers Association’s 1997 Book of the Year. His work has appeared in Sport, The Sporting News, and the Chicago Sun-Times. --This text refers to an out of print or unavailable edition of this title.
Read more

Will Slags
5.0 out of 5 stars Must read for coaches and players
Reviewed in the United States on February 5, 2017
Verified Purchase
Favorite basketball book of all time, gives wonderful insight into the young mind of one of the best players ever.
Read more
Helpful
Report abuse

Jared Bernardino
3.0 out of 5 stars Good book
Reviewed in the United States on January 14, 2013
Verified Purchase
this book is good. Not 4-5 star book but good. I would recommend this to any player who has work ethic. Kobe Bryant was noted a decent player but he worked so hard he became a legend
Read more
Helpful
Report abuse

Sigurãur Einar Einarsson
3.0 out of 5 stars Just solid book
Reviewed in the United States on February 17, 2011
Verified Purchase
This book was okey. I am a big Lakers and Kobe fan but most of the storys in this book i know about and the Lazenby did talk to mutch about his Bulls people.
Read more
Helpful
Report abuse
See all reviews