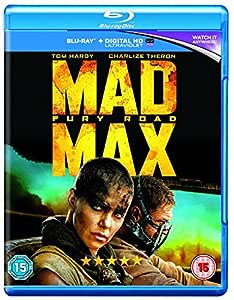 Haunted by his turbulent past, Mad Max believes the best way to survive is to wander alone. Nevertheless, he becomes swept up with a group fleeing across the Wasteland in a War Rig driven by an elite Imperator, Furiosa. They are escaping a Citadel tyrannized by the Immortan Joe, from whom something irreplaceable has been taken. Enraged, the Warlord marshals all his gangs and pursues the rebels ruthlessly in the high-octane Road War that follows.

4.5 out of 5 stars
4.5 out of 5
1,401 global ratings
How are ratings calculated?
To calculate the overall star rating and percentage breakdown by star, we don’t use a simple average. Instead, our system considers things like how recent a review is and if the reviewer bought the item on Amazon. It also analyzes reviews to verify trustworthiness.

Jamie
1.0 out of 5 stars WILL NOT PLAY ON US DVD PLAYERS
Reviewed in the United States on October 2, 2020
Verified Purchase
When I looked for this movie on DVD, it was a cheap rate and did not specify that it was coming from the UK. It also had a ship date similar to US shipping dates, so I thought nothing of it. The shipping was kind of high I thought at first and was six dollars. Two weeks later, I still didn't have the DVD, and found out when tracking that it was going to be shipped from the UK and I would get it sometime in October. I received it at the end of September, and it won't play on a US DVD because the format isn't correct. It costs more to return it and in shipping than it did for the DVD. AMAZON needs to take greater care on items shipped from outside the United States as far as quality of the products and where they are coming from and have it in letters next to the item description.
Read more
2 people found this helpful
Helpful
Comment Report abuse

Tcl owner
1.0 out of 5 stars Not the American Release and no digital download code
Reviewed in the United States on September 15, 2020
Verified Purchase
blatant and illegal false advertising in America. This is sneakily being passed off as some American release with a digital download code. As far as I can tell this is the European version with no download code included at all. The pictures used to advertise this product clearly include the movies anywhere logo and specifically state a digital copy is included on the packaging. My disc and case make zero mention of this offer, maybe the package is printed differently in the EU, but regardless there is no digital code included within the box.
Read more

Amazon Customer1439
1.0 out of 5 stars Wrong country...doesn't work
Reviewed in the United States on September 6, 2020
Verified Purchase
From a different country, so apparently it doesn't work at all and isn't compatible with out DVD player.
Read more
Helpful
Comment Report abuse

Joe Foster
1.0 out of 5 stars Movie is good, packaging was damaged
Reviewed in the United States on August 8, 2020
Verified Purchase
I really love the movie, and I think the 4k transfer is good. Unfortunately, the case I received was severely damaged on the top corners. As a collector, this is very disappointing.
Read more

Amazon Customer
5.0 out of 5 stars What a beauty O_O
Reviewed in the United Kingdom on February 26, 2019
Verified Purchase
I won't be addressing the movie itself here, but purely the 4K HDR version.

Jaw dropping is an understatement. What makes this movie worth having on 4K HDR is the fact that there is barely any use of CGI, the lighting, the colour tones - the identity of the movie is simply taken to a whole other level here.

If you have the means, it's worth the extra money for 4K - especially after comparing it to the standard bluray version.
Read more
23 people found this helpful
Report abuse

Lenny
5.0 out of 5 stars Mad Max Fury Road...
Reviewed in the United Kingdom on July 15, 2017
Verified Purchase
Excellent film! I found the first 30 minutes to be a little "erratic" and I was unsure if I'd be able to get into it with all the characters shouting and grunting and a very full on chase. Then, the story line became more clear and had meaning. Then I really got into it and even though Tom Hardy (Max) didn't say a lot during the film it turned out to be a terrific film. Fast paced, quite gripping and strong characters. I love the original MM films with Mel Gibson, and this is just as good without taking away from the essence of the originals which first came out 37 years ago! Hard to believe it's been that long since the originals came out and this is a great remake of the apocalyptic hero that is Mad Max. Well worth watching as long as you can keep up! I recommend :)
Read more
11 people found this helpful
Report abuse

Marco M
5.0 out of 5 stars Possibly the greatest action movie ever made
Reviewed in the United Kingdom on July 19, 2020
Verified Purchase
It took 70 year old Australian George Miller to show American 30-something year old directors how to make a good action movie.

He ended up making the best action movie ever.

Why? Because it was made the old way. The cars (if you can call them that) are real, not CG fakery. The gobsmackingly weird cars and trucks are actually hurtling across the desert as the cameras are rolling. This is real filmmaking, not sitting in a comfy chair watching actors walk on a treadmill in front of a green screen (ALA George Lucas). The action is real, you can taste the desert dust, you can feel the agony and Hell the actors went through making this incredible movie.

And watching it 3D made it even more visceral. You’re there, in the car, roaring across the desert with guns blazing around you.

WHAT A MOVIE!!!!!!!
Read more
One person found this helpful
Report abuse

Sursubbu
5.0 out of 5 stars Non-stop thrill ride
Reviewed in the United Kingdom on January 24, 2016
Verified Purchase
This was for me a blind-buy based on the critical reception of the film from trusted sources. While I regret not seeing this at the cinema, I had a terrific experience at home.
Plot and dialog are of negligible consequence in this movie. Suffice to say there is a chase. A small band of good guys are trying to escape an army of bad guys (dressed in costumes/make-up that reeks of evil, and driving outlandish vehicles). Instead of trying to shove in uninspired drama, director George Miller converts this sparseness to an advantage, and the film is almost a (violent) tribute to the films of Buster Keaton in its visual design. The armada of bad guys is like a mobile circus with all manner of outrageous acrobatics and hell yes, a mutant guitar-player suspended on wires who keeps riffing even when people around him are trading bullets and punches.
The blu-ray gives a terrific audio-visual experience. The film has some very aggressive color grading that enhances the crazy mood of many scenes. Detail is fantastic across the board. The sound is beefy too, and even without a discrete sub-woofer I could feel the rumble of vehicles traversing the desertscape. There are a bunch of featurettes covering the making of the movie, which are nice though bland and promotional in tone. I really liked the one where they cover the inspiration behind the design of the road vehicles used in the film.
Read more
3 people found this helpful
Report abuse

Maverickaizer
5.0 out of 5 stars Good Movie
Reviewed in the United Kingdom on September 27, 2020
Verified Purchase
This movie ended up being a lot more interesting and enjoyable than I anticipated. This movie focuses on the female character, Imperator Furiosa (played by Charlize Theron, who was amazing) rebelling against an authoritative ruler with a group of other empowered female prisoners.

I was equally pleased that Tom Hardy gave his own interpretation of Max which made it feel like a stand-alone movie. I rate this movie 8.5 out of 10.
Read more
Report abuse
See all reviews