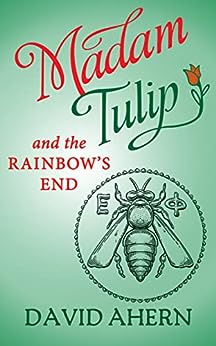 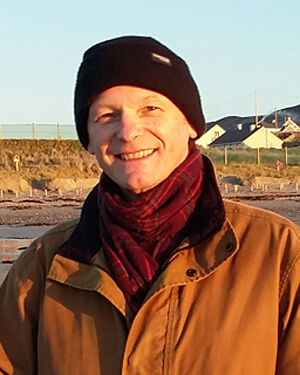 by David Ahern (Author) Format: Kindle Edition
Book 5 of 5: Madam Tulip
See all formats and editions
Sorry, there was a problem loading this page. Try again.

"Character-driven mystery at its best!"
On the private island of a rich banker, a young and talented stonemason falls from a cliff. A tragic accident? Or murder?

The dead man’s sister is obsessed with justice and will stop at nothing.
A daughter is bequeathed an island mansion beyond her means.
An enigmatic letter hints at a hidden fortune.

After the collapse of her theatrical tour, actress Derry O’Donnell must work to pay her way in a West of Ireland village. As Madam Tulip, she tells fortunes for a local charity only to be drawn into a maze of mystery and intrigue.

Madam Tulip and the Rainbow’s End is the fifth in the Madam Tulip series of mystery-adventures in which out-of-luck actress Derry O’Donnell finds the promise at the End of the Rainbow may not be what it seems.

David Ahern grew up in a theatrical family in Ireland. He worked as a stagehand, a piano mover, a research psychologist and an IT guy before becoming a television writer, director and producer. He created international documentary series and won numerous awards, none of which got him free into nightclubs.

He played in great bands, all doomed to obscurity, and wrote equally obscure plays before taking to novel-writing. He now creates the Madam Tulip mysteries, mostly to make himself laugh and scratch his head. David Ahern loves pretending this is actual work.

David lives in the beautiful West of Ireland with his wife, a cat, a tame pheasant, a clan of badgers and a vegetable garden.

You can learn more about David Ahern and the Madam Tulip mysteries from his website www.davidahern.info

Jill-Elizabeth (Jill Franclemont)
TOP 500 REVIEWERVINE VOICE
4.0 out of 5 stars Such a fun series!
Reviewed in the United States on March 15, 2022
I am so delighted to be able to review this fifth installment in the Madam Tulip/Derry O’Donnell series! I have been fortunate enough to review each book as they have been ready for publication, and really enjoy the series.

The characters are so real, full of quirks and foibles and frustrations that are resonant and believable – most notably so in their relationships with each other. And this is a marvelous contrast to the plots, which typically veer off into the unusual at some point and require some suspension of disbelief. But that’s part of the magic of the series for me – I love that I can picture each character in my head and imagine sitting down to tea and sympathy during their various escapades, while continuing to find their adventures just exciting and semi-fantastical enough to keep me engaged in a delightful vacation from “real” life during the course of the story!

In this latest story, Derry once again finds herself scrambling to clean up someone else’s mess – this time, the producer of her latest show, who has absconded with the takings. The resulting adventure sees her exploring everything from sunken ships to long-lost treasure, from family dynamics (both her own AND those of her new-found friend Léna) to relationship possibilities that always seem just beyond her reach… It’s a wild romp of a ride, with a cast of characters (both returning and new) that offer something for everyone.

The ongoing back-and-forth between her mother and father continues to be one of my favorite elements in the series, and it took a new and hilarious turn in this book as Jacko fled to an isolated (and utterly cut-off) island in his constant quest to foil Vanessa’s efforts to force him to be productive (and to repatriate some of his own, earlier, art). It sounds ridiculous to explain here, but their characters are so magnificently crafted, and Derry’s frustrations with them both so resoundingly realistic, that it just works and really adds a nice depth to their character arcs across the series.

If you’re looking for a fun series that features great characterization, fun(ky) plot lines, and just enough oddly prescient fortune telling to make even a skeptic start to question their beliefs, this is a great place to turn!

Thanks to the author for my obligation-free review copy.
Read more
One person found this helpful
Helpful
Report abuse

Steph Warren
5.0 out of 5 stars Light-hearted but action-packed mystery, with a tinge of the possibly paranormal
Reviewed in the United States on March 1, 2022
*I received a free ARC of this book, with thanks to the author. The decision to review and my opinions are my own.*

Derry (and Bruce) are back to take on a new mystery as an accidental side effect of their acting travails, in this fifth book in the Madam Tulip series.

Definitely read books 1-4 first with this series, as not only is the whole Madam Tulip arrangement explained, but all of the relationships between Derry and Bruce, Jacko, Vanessa and Bella are established and developed. Plus, they are well-written, fun mystery books, so why wouldn’t you?!

Here, yet again we have some comic relief provided by Jacko and Vanessa’s parental-professional bickering, and the usual superhero antics from the multi-talented Bruce (showcasing his diving portfolio this time), but as always the main accolades go to the joint stars of the show – Derry and Madam Tulip. I love how Derry’s relationship with her alter ego has developed over these books, so that even as she has stepped back from the performances (for understandable multiple-murdery reasons) she has still grown in confidence in the role and can access Tulip’s skills more readily when required.

The plot revolves around both a mystery and a puzzle this time, and I really enjoyed trying to piece together the cryptic clues before the characters managed it. (For those wondering, I didn’t do too badly, but didn’t get all of them either, which was very satisfying on both fronts!)

This whole series has become one of my favourites over the years, as I can always rely on them being not only a great mystery read, but entertainingly witty too, and I have grown extremely attached to the main characters and their antics. I can thoroughly recommend Madam Tulip to anyone who enjoys mystery novels that are light-hearted but action-packed, and with a tinge of the possibly paranormal as an intriguing added hook.

Despite my towering TBR pile, this is an author that I have set up notifications for to ensure that I don’t miss anything he releases. This was my favourite Madam Tulip book so far, and I already can’t wait for the next one!

''I used to tell fortunes for parties and celebrity functions, but I stopped,’ said Derry. She almost said more, but words failed her. How could she explain that Madam Tulip had led her into the company of people no sane person would want in their lives, and situations only Bruce could dismiss as character forming?
‘I like doing charities though,’ Derry finished. And so she did. Word had gotten around, and since March, she had done two hospital fundraisers, a cancer charity and a fund for guide dogs. Why it seemed important to do these things, she wasn’t sure—something about feeling lucky. Like Madam Tulip herself was saying Derry owed something. What that debt might be, Tulip hadn’t explained.
‘Well now,’ said Boyle. ‘A small idea occurred to me. Two, in fact. First things first—would Madam Tulip like to help us out?''

gayle boyce
5.0 out of 5 stars Fun mystery with action and suspense!
Reviewed in the United States on March 1, 2022
This is such a fun mystery series. Once again, Derry O'Donnell and her sidekick Bruce, ex Navy Seal, have an acting gig, but the troupe has run out on them. No pay and sticking them with the hotel bill for all of the troupe! Derry agrees to do her Madam Tulip act for the hotel in exchange for payment for her room bill. Bruce will serve as bouncer for a few days. Derry/Madam Tulip meet a local wealthy family that has recently lost the patriarch. The family is a messy blended family. Lena, the daughter, and Derry hit it off and Derry is invited to their estate to visit and perform as Madam Tulip for a party. With Derry's instincts/ability, she sees things clear for her audience. Maybe too clear. As it goes on, money, inheritance, greed, and murder appear. Throw in some modern technology and humour and you have the makings for a really good read. The story heats up as Derry and Lena get kidnapped and have to use their quick thinking and solve the mystery and save themselves.
I received an ARC and voluntarily provided this review.
Read more
One person found this helpful
Helpful
Report abuse
See all reviews