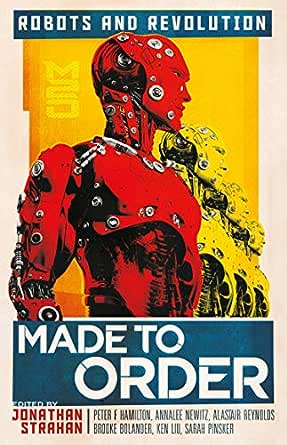 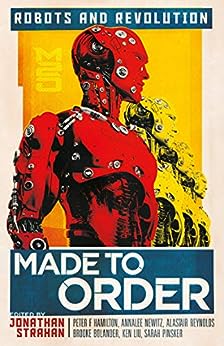 Made to Order: Robots and Revolution Kindle Edition

“A stand-out collection that should be of interest to any admirer of short fiction, regardless of genre…” , The Guardian

“Short stories have been the lifeblood of science fiction since HG Wells, and Solaris are maintaining the tradition.” , Financial Times

“[A] useful guide to how some of our best SF writers are reshaping a classic theme as it moves closer to our own reality.”, Locus Magazine --This text refers to the paperback edition.

Jonathan Strahan (www.jonathanstrahan.com.au) is a World Fantasy Award award-winning editor, anthologist, and podcaster. He has edited more than 70 books, is reviews editor for Locus, a consulting editor for Tor.com, and co-host and producer of the Hugo-nominated Coode Street Podcast. --This text refers to the paperback edition.

E.
4.0 out of 5 stars Very good stories... Mostly
Reviewed in the United States on March 26, 2020
Verified Purchase
Like most other anthologies, "Made to Order" is a little bit uneven. There are a lot of good stories, a handful of truly great stories, and, sadly, a few that were awful.

Heavy-hitters Peter Watts, Alastair Reynolds, Peter Hamilton all contribute excellent stories to the collection. I don't suppose that should surprise anybody -- but what I did find a bit surprising was just how funny and engaging the Reynolds story was.

Ian MacLeod's contribution -- about the nature of faith in a post-singularity world where the promises of religion have been made manifestly real, and about the tendency of created things to resemble their creators -- is also a real stand-out. It was short, but full of enough concepts to fill a full-length novel, and written with a beautiful economy of style. MacLeod is a writer to follow.

Analee Newitz also contributed an excellent story. In fact, one of the book's best. I'm not a fan of her progressive politics, and I don't like the whole pronoun thing... but credit where it's due. A very well-crafted short story, with an interesting near-future setting, a not-terribly-implausible premise, and a surprise ending that's so glaringly obvious in hindsight that I should have seen it coming. Truly well done.

Rich Larson is a horrible writer of science fiction. Suffice it to say that his story is best skipped. Sadly, this isn't the first time Larson has contributed a bad story to an otherwise good anthology.

Saad Hossein also seems incapable of writing a coherent story -- and he attempts to mask his lack of skill with an incredible amount of middle-school-tier profanity. His writing style made me cringe. In fact, I'd go so far as to say that his was such an obviously, objectively bad story that most editors wouldn't touch it for love or money. No idea how it found its way into this collection.

A few more stories were neither good nor bad --- forgettable.

All in all, certainly worth the price of admission. Some of the good stories are VERY good. The bad ones can be skipped, and you won't miss a thing. Even if you cut them right out, it's still a fairly long collection.
Read more
3 people found this helpful
Helpful
Comment Report abuse

Richard Meyer
3.0 out of 5 stars I'd give it a 3.5, but since I can't I don't want people to gauge it too highly
Reviewed in the United States on August 8, 2020
Verified Purchase
Mostly pretty good peter F Hamilton is a sure pleaser with me.

many of the other stories were interesting and great. There was a story, that I am sure may have been interesting about a person who spends his work hours sampling news and (because the author is OTW) wonders why bad things never happen to white people (he is sampling US news, BTW) - if he can't work that out, I can't help -1 star.
Read more
One person found this helpful
Helpful
Comment Report abuse

Ernest Lilley
4.0 out of 5 stars Before they were our future robot masters, they were something else.
Reviewed in the United States on March 18, 2020
Made To Order: Robots and Revolution Edited by Jonathan Strahan 3/17/2020 Rebellion

First off, this is a really excellent collection of stories that does exactly what science fiction should do, providing entertainment while provoking thought. Not that this should be a surprise, as Jonathan Strahan has assembled a really talented group of writers to speak to his theme: that robots will be as oppressed as any class of worker, and by giving them the intellectual capacity to figure it out we've lit the fuse on an inevitable confrontation.

The editor starts out with a review of robots in lit going back to the first mention in Karel Čapek's play, R.U.R and adds just enough context for each story to frame what comes next. The stories are all first-rate, though no two are alike. Peter Watts, Daryl Gregory, Ian R. MacLeod , Annalee Newitz and more (including one of my favorite new writers, Sarah Pinkser) are here and my only regret is that Martha Wells (The Murderbot Diaries) isn’t included.

By the way, although I don't think it's mentioned, not only is this the 100th anniversary of the term "robot," that was also the year Asimov was born. So, a banner year for robots either way.

If you're interested in robots or AI, as the line has gotten blurred, this is a collection you need to read. Fortunately, it's also a collection you should find both enjoyable and yes, at times, disturbing.
Read more
3 people found this helpful
Helpful
Comment Report abuse
See all reviews