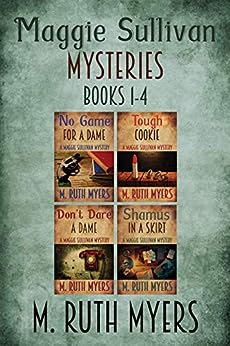 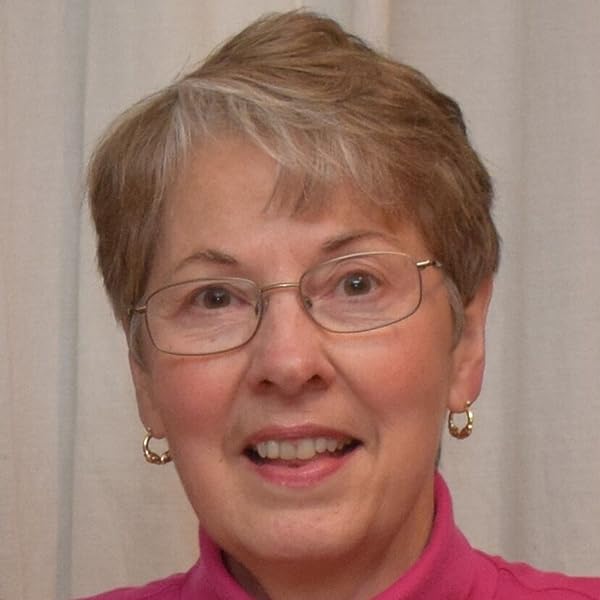 by M. Ruth Myers (Author) Format: Kindle Edition
See all formats and editions
Sorry, there was a problem loading this page. Try again.
Join private investigator Maggie Sullivan for a fast-paced ride through streets and alleys of 1940s Dayton, Ohio, in the first four books of this historical mystery series that blends cozy with harboiled. The set includes the Shamus Award-winning novel Don’t Dare a Dame plus these titles: No Game for a Dame, Tough Cookie and Shamus in a Skirt.

NO GAME FOR A DAME – When a stranger who threatened her and wrecked her office winds up dead, 1940s private eye Maggie Sullivan finds herself taking on a crime boss.

TOUGH COOKIE – A high stakes swindler Maggie is hunting is found floating in the river. Now someone wants to silence her – and the corpse is strangely active.

DON’T DARE A DAME – A 25-year-old murder jeopardizes Maggie’s future as a private eye as well as her life when it points toward powerful people with political connections.

SHAMUS IN A SKIRT – Murder and theft at a posh hotel pits Maggie against well-heeled suspects fleeing the war in Europe.

Like mysteries with touches of humor, well-developed characters and a gritty little female who holds her own with the tough guys? Maggie’s your gal. More than 800 five-star reviews say once you slide into the passenger seat of Maggie’s DeSoto, you won’t want to get out. Buy the box set now.
Read more
Previous page
Next page

At age three author M. Ruth Myers blamed the misdeeds she was accused of on her invisible friend PapPap, who lived in a mayonnaise jar. Clearly Ruth herself was guilty only of running with a bad crowd.

Today she pleads guilty to being the Shamus Award winning author of the Maggie Sullivan mystery series as well as numerous other novels. You could say she’s a lifelong fibber who discovered her niche at an early age. Her books have been translated into seven languages, taught in a college course in Japan and optioned for film. Her romantic suspense novel A Touch of Magic was condensed in Good Housekeeping.

A native of Missouri, Ruth grew up in Wyoming. After earning a journalism degree from the University of Missouri, she wrote for daily papers in Michigan and Ohio. She has also worked in public relations, association management and as a ventriloquist. She’s happiest, however, when she’s killing people in the privacy of her study. Her husband and cat give her sideways glances and twitch from time to time.

When not involved in criminal acts, Ruth reads, plays the concertina (usually Irish tunes) and bakes.

PapPap is serving hard time as an editorial assistant.

John T. Hansen
4.0 out of 5 stars Entertaining, but not Outstanding
Reviewed in the United States 🇺🇸 on January 22, 2022
Verified Purchase
I read detective novels for entertainment, and the Maggie Sullivan books are that, especially if you like a young, female private detective in a male world: Dayton, Ohio circa 193901940,. I refer stories where the goal is solving baffling s crime with brain work. Maggie does some of that but the author apparently felt that some "Perils of Pauline" are also necessary to keep the reader interested. I can do without that, especially when the heroine or hero turns out to be physically and unbelievably super-human. That's why I gave this a four.
Read more
Helpful
Report abuse

Vidar
5.0 out of 5 stars So good!
Reviewed in the United States 🇺🇸 on February 23, 2022
Verified Purchase
Read all four books in this box set straight through. Hoping there are more. Strong, tough female protagonist making it in a man’s world when it was even harder to do than it has been in my lifetime. The whole seems so authentic it feels like I took a time machine to late 1930s Dayton. Great character development across the stories, too. And we’ll crafted mysteries. I’m off to look for more Maggie Sullivan stories!
Read more
Helpful
Report abuse

Rocky's mom
5.0 out of 5 stars Great characters
Reviewed in the United States 🇺🇸 on December 8, 2021
Verified Purchase
I liked this collection of four books. Maggie Sullivan carves out an interesting place in an interesting time. The descriptions of the Great Depression and the many transients looking for work, shelter or just a bite to eat endorses firsthand stories I've heard from folks who lived it. Nice slice of history!
Read more
Helpful
Report abuse

Hap
5.0 out of 5 stars Wonderful characters and plots
Reviewed in the United States 🇺🇸 on January 2, 2022
Verified Purchase
I thoroughly enjoyed the four books of the tales of Maggie Sullivan. The characters, story lines, ingenuity, and details were superb. Each situation was unique, and I was sorry to see the stories end.
Read more
Helpful
Report abuse

Capell
5.0 out of 5 stars You can’t help but love Maggie!
Reviewed in the United States 🇺🇸 on December 4, 2021
Verified Purchase
Meyer’s makes Maggie both likable and real. As the mystery unfolds you also get to know Maggie’s personal life as well as get a glimpse of life in pre-world war small town America. Excellent!
Read more
Helpful
Report abuse

Steward Guardian
5.0 out of 5 stars I love the books of Ray Chandler and Dash Hammett
Reviewed in the United States 🇺🇸 on March 19, 2018
Verified Purchase
I love the books of Ray Chandler and Dash Hammett. They were said to be 'hard boiled.' Sam Spade and "The Maltese Falcon" and so forth. It is easy to discover that this author is also a pro, and pretty clear that she trained as a journalist.
For one thing, the usual Amazon writer's habit of needing ten or twenty proof-readers is absent; this is a pro job. For another, virtually all elements of an involving story are present. Placed in time just before WWII, the lexicon of the characters seem accurate - well researched. So too is the history (if you can imagine Dayton, Ohio as having a history - it does). Action goes forward quickly enough, with local color smoothly greasing the wheels of the story. The discovery of such details is delightful and the characters themselves fully described enough. While it's a nuisance having to pay for later editions, I shall without question complete the set.
Read more
8 people found this helpful
Helpful
Report abuse

Dvince
5.0 out of 5 stars Maggie Sullivan is my favorite!!!
Reviewed in the United States 🇺🇸 on April 26, 2021
Verified Purchase
I love Maggie Sullivan. This series is wonderful. I can't read the books fast enough. The plots are great. The historical aspect and accuracy is spot on. I won't give the book story away in a review because I think you will LOVE reading every word of every page for yourself.
Read more
2 people found this helpful
Helpful
Report abuse

Kindle Customer
2.0 out of 5 stars Didn't like writing style
Reviewed in the United States 🇺🇸 on January 20, 2022
Verified Purchase
In the hands of a good writer, this could have been an excellent book. The protagonist was dislikeable, always spitting out uncontrolled hurtfulness and rudeness. She's always sorry afterwards, but then does it again, and again, and again. I got tired of it and stopped reading. It was a subject that I was interested in but not worth spending my time on.
Read more
Helpful
Report abuse
See all reviews

Maxine Leslie
5.0 out of 5 stars All 4 books were a wonderful read!
Reviewed in Canada 🇨🇦 on September 25, 2022
Verified Purchase
I was sad to come to the end of the series. The heroine is smart, courageous and an inspiration for women. The characters are realistic and remain true to themselves through out the series. Descriptions of the settings make you feel like you are there.
Read more
Report abuse

Desney King
3.0 out of 5 stars Not my cup of tea
Reviewed in Australia 🇦🇺 on March 22, 2022
Verified Purchase
Well written, well paced - but by the time I was partway into Book 2, I'd lost interest.
Maggie, and the era, just didn't do it for me.
I'm sure many readers would disagree, so I encourage you to give this collection a go.
Read more
Report abuse
See all reviews
Report an issue
Does this item contain inappropriate content?
Report
Do you believe that this item violates a copyright?
Report
Does this item contain quality or formatting issues?
Report