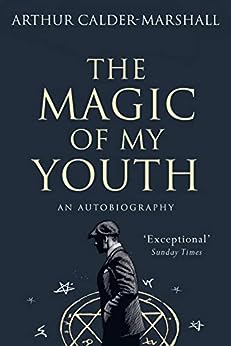 The Magic of my Youth: A lavish memoir of 1920s London Kindle Edition

by Arthur Calder-Marshall (Author) Format: Kindle Edition
See all formats and editions
Sorry, there was a problem loading this page. Try again.
A charming, quirky memoir from British author Arthur Calder-Marshall, recalling his youth in 1920s England. The title needs to be taken quite literally as much of the narrative revolves around the shadowy figure of occultist Aleister Crowley, at the height of his dubious powers during this era.

As boys growing up in a small country town Arthur and his brother befriend an eccentric poet, whom they dub Vicky Bird – in fact a fairly well-known literary figure called Victor Neuberg. He is haunted by some romantic tragedy in his past, in which Crowley may be implicated. When Arthur goes up to Oxford Vicky Bird connects him with circles who dabble in the supernatural.

In London, Arthur graduates towards the epicentre of Bohemian literary life in the pubs of Fitzrovia. Here he meets the femme fatale Betty May, who blames Crowley for the death of her husband, and tells fantastic tales of satanism in Sicily. At last Arthur encounters the man himself, in a dingy café…

This is a wonderful tale of English eccentrics, told with deadpan British humour. Calder-Marshall pokes fun at his own youthful preoccupations, but nonetheless a sinister, menacing edge lingers. Bizarre, droll, and threaded with the melancholia of a generation who only just escaped the devastation of World War I, it is sure to delight the modern reader.

'The delicate art of autobiography is one to which the English bring a particular talent. It’s good to know The Magic of My Youth will be available once more, as it deserves to be’ - Michael Holroyd, biographer - neglected.books.com.

‘His own memoir, The Magic of My Youth, does little to solve the mystery of Calder-Marshall, coded as it is in a dizzying and fantastical tale about a young Oxford student in search of occultist Aleister Crowley, a wanton influence on the writer’s formative years. It is a lavish and delirious read for anyone interested in experiencing fashionable Bloomsbury in the 1920s, the perfect complement to Evelyn Waugh’s Vile Bodies’ – The Guardian

Arthur Calder-Marshall (1908 – 1992) was an English novelist, essayist, critic, biographer and screenwriter. He lived at the heart of the literary elite, his coterie including Stephen Spender, Evelyn Waugh, Isiah Berlin and Julian Maclaren-Ross. He moved briefly to Hollywood with his glamorous wife Ara, also a writer, where the couple were courted for projects by Orson Welles and James Mason. Calder-Marshall wrote a number of novels and biographies, including Two Duchesses, the story of Georgiana, Duchess of Devonshire, an ancestor of Princess Diana. Georgiana’s story was filmed in 2008 as The Duchess, with Keira Knightley. He had two daughters, Clare and Anna. Anna Calder-Marshall is a successful actress and her son is the actor Tom Burke.
Read more
Previous page
Next page

R. Stewart
4.0 out of 5 stars A fascinating memoir
Reviewed in the United States 🇺🇸 on March 11, 2021
This memoir was originally published by the venerable firm of Rupert Hart-Davis of 36 Soho Square, London, in 1951. In the author's foreword, Arthur Calder-Marshall thanks Rupert (later Sir Rupert) for encouraging him to complete the work.

The book opens with an anecdote, a tale told to the author by a friend about an unlikely, seemingly coincidental encounter related to the occult magician Aleister Crowley. Looking back, Calder-Marshall notes that, once you've heard Crowley's name, you tend to hear it everywhere. Indeed, "The Beast," as he was known, becomes a touchpoint whose name recurs throughout the book.

Calder-Marshall writes about he and his older brother growing up in the small, southern England town of Steyning in the 1920s. Central to this narrative is the friendship the two brothers developed with a local eccentric whom they called Vickybird. The boys' father strongly disapproved of Vickybird, calling him "a crank. And I'm willing to bet you anything you like he's introspective." A former poet who wrote no more, owner of a small press, Vickybird (and his wife Kathleen) lived in penury but were great sources of fascination for the boys.

Though never mentioned in the book, Vickybird's real name was Victor Benjamin Neuberg. As poetry editor of a newspaper called Sunday Referee, he had been the first editor to publish Dylan Thomas. Years later, on learning of Neuberg's death, Thomas said, "Vicky encouraged me as no one else has done." Neuberg was also, in his youth, a collaborator with and lover of Aleister Crowley. (Also spelled Vicky Bird, the nickname referred to his halting, birdlike gait.)

When Arthur went off to study at Oxford, Vickybird insisted that the younger man call upon an old friend known as "Auntie Helen," another aging eccentric who had, through Vickybird, become enamored with magic. The author recounts amusing tales of Auntie Helen, including his own strenuous efforts to keep her ahead of the bill collectors. Her philosophy when it came to borrowing on credit was always "go big," an attitude that eventually forced her to leave town in a hurry.

The author's musings include the story of former Oxford student Raoul Loveday's suspicious death while staying at Crowley's Abbey of Thelema in Cefalù. Loveday's wife, Betty May, followed him to Sicily, where she engaged in a "struggle with The Beast for the possession of her husband's body." Ultimately she lost that battle. Loveday's death may have been accidental, or it may have been Crowley's sacrifice to Adonis with the complicity of the victim. Betty May was, herself, quite notorious, and her autobiography Tiger Woman is still in print. I think it admirable that she did try to kill Aleister Crowley in revenge for her husband's death, but her first shot missed and the gun jammed on the second try.

I won't recount all the stories told in The Magic of My Youth, but I will describe one more if you'll forgive my wordiness. A fellow student founded the Oxford University Poetry Society (at an earlier date currently claimed on the OUPS website), and Arthur Calder-Marshall became its Secretary. Having learned from Betty May that Crowley had returned to London, Calder-Marshall arranged to meet him at a restaurant and was surprised to find "a bald and elderly stockbroker, apparently working on the back of a menu calculations" which turned out to be a shopping list with estimated costs. Calder-Marshall invited The Beast to come to Oxford to deliver a lecture to the Poetry Society.

Crowley astutely ridiculed the idea that the University would ever allow it, but Calder-Marshall convinced him to accept. Of course, in the end, the Oxford authorities forbade the lecture. Crowley demanded that it at least be printed or else he would sue. Calder-Marshall subsequently arranged with the Oxford Mail to have it printed as part of an exclusive-to-the-Mail story about the banned event. "You don't expect me to print this trash," protested the Mail editor when he read the lecture. But he had promised and was compelled to print five hundred copies, of which Calder-Marshall estimates about fifty were sold.

Crowley was impressed enough with Calder-Marshall's initiative that he asked the younger man to visit him at Knockholt. "There are Matters of Grave Import we should discuss together..." The author and his wife met The Beast and his lover, an exotically dressed Brazilian woman, in a modest, borrowed cottage that was filled with Crowley's recent paintings of "trance states." What followed was a tremendous test of wills in which Crowley tried to banish the author's wife, who was of no interest to him, and persuade Calder-Marshall to spend the night and become his new assistant. In the end, Calder-Marshall managed to pull back and to eventually conclude that The Beast was "little better than a pedlar of spells as phony as quack medicines."

There's more, but I've already gone on at great length describing this slight tome. Arthur Calder-Marshall wrote lovely prose full of insight and wit, and I plan to look for more of his work. (Orson Welles optioned one of his novels to turn into a movie but, as happened all-too-often with Orson, the financing for it fell through.) The Magic of My Youth provides a charming glimpse into a time and place far removed for most of us, along with a small sense of some of the minor actors in the drama that surrounded the famous occultist who was once known as the wickedest man in the world.
Read more
Helpful
Report abuse
See all reviews

Parker
5.0 out of 5 stars Fascinating
Reviewed in the United Kingdom 🇬🇧 on October 14, 2015
Verified Purchase
I loved this book...it was fascinating and beautifully written. It cast a light on an era I didn't know and my only regret is that I have finished it and he didn't write the next instalment.
Read more
Report abuse
See all reviews
Report an issue
Does this item contain inappropriate content?
Report
Do you believe that this item violates a copyright?
Report
Does this item contain quality or formatting issues?
Report