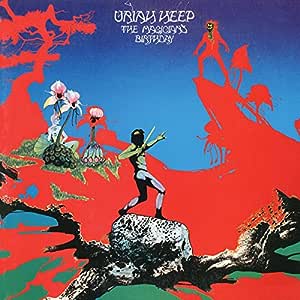 Initially released in 1972 ‘The Magician's Birthday’ is the fifth album by British rock band Uriah Heep. Fast forward 46 years it still remains a timeless classic. Painstakingly remastered by Andy Pearce this 2CD set also includes alternative mixes that excite, reignite and rejuvenate. Extensive liner notes penned by best-selling author Joel McIver tell the story of the band’s ascent to the very top and are accompanied by new and revealing accounts of the time from Mick Box and Ken Hensley. Following the meteoric success of their previous release ‘Demons And Wizards’ that firmly cemented Heep’s legendary status ‘The Magician’s Birthday’ did not disappoint. In fact, it carried on from where the previous album left off, selling 2.5 million copies worldwide.

4.6 out of 5 stars
4.6 out of 5
339 global ratings
How are ratings calculated?
To calculate the overall star rating and percentage breakdown by star, we don’t use a simple average. Instead, our system considers things like how recent a review is and if the reviewer bought the item on Amazon. It also analyzes reviews to verify trustworthiness.
Top reviews

Zerohouse
4.0 out of 5 stars A Difficult Study
Reviewed in the United States on October 22, 2019
Verified Purchase
I've listened to the Heeps for years and saw them live in Germany in '75 at an outdoor concert. So I hadn't listened to "The Magician's Birthday in years but saw it on sale in premium vinyl format so I bit the hook so to speak. Of course "Sweet Lorraine" is a classic but it can be found on several decent collections of their best songs. To these ears a lot of the album is poorly conceived musically. The term "noodling" comes to mind in that the songs seem to wander at times. But this is an early 70's album so that's not really a put down so much as an observation. The album cover has no track listing which is just dumb. The cover art by Roger Dean (Yes, etc.) is beautiful, very pop art for the time. All in all a good album just not great.
Read more
2 people found this helpful
Helpful
Comment Report abuse

Churchbat
5.0 out of 5 stars Drop the needle and down the rabbit hole you'll go.
Reviewed in the United States on November 28, 2013
Verified Purchase
First of all, I honestly can't believe NO ONE has reviewed this album. Well, let me start by saying that if you're into '70s Hard Rock or Metal AT ALL then you owe it to yourself to have this masterpiece in your collection. From the amazing Roger Dean gatefold cover to the opening of the first track, "Sunrise", you know you're beginning a very special journey, and you're right, you are. There is not one minute of filler on this album. If you like your music to full tilt ROCK without stopping, look elsewhere. But if you like variations in tempo and mood on an album, you'll feel right at home here.This album is part of what is known as the "classic" Uriah Heep lineup: Mick Box: guitar, David Byron: vocals, Ken Hensley: keyboards, guitar, vocals, Gary Thain: bass, and Lee Kerslake: drums, vocals. Of the five albums from this period of Uriah Heep, "The Magician's Birthday" shines like a beacon over the rest, with only "Demons and Wizards" and "Wonderworld" coming even close to its shadow. This album is magical. There are certain records that completely command your undivided attention the moment the needle is dropped, and this is one of them. Just so we're on the same page, I'll name a few others. Pink Floyd's "Dark side of the Moon", Yes' "Close to the Edge", The Rolling Stones' "Their Satanic Magesties Request", and The Beatles' "Sgt. Pepper..." I stayed within the same generation for those examples, so for the younger folks, let's say Porcupine Tree's "The Sky Moves Sideways", Opeth's "Morningrise", Queensryche's "Operation: Mindcrime", or Iron Maiden's "Powerslave". This is right up there with any of those. If you turn off the lights and let yourself go, this album will make you feel like you're sitting in the middle of a dark, dense forest under a full moon. Who needs drugs when there's music this amazing?
Read more
17 people found this helpful
Helpful
Comment Report abuse

Russ
2.0 out of 5 stars Not great.
Reviewed in the United States on May 18, 2020
Verified Purchase
I love the band, but this was a really poor pressing. Very tinny sounding, little dynamic range.
Stick with the streaming version until they do a different pressing.

Christopher Bing
5.0 out of 5 stars Five Stars
Reviewed in the United States on May 30, 2017
Verified Purchase
If you're a Uriah heap fan the variations on disc two are well worth the money.
Read more
5 people found this helpful
Helpful
Comment Report abuse

Kid Icarus
5.0 out of 5 stars never knew of these people until I heard "Sweet Lorraine" on Youtube
Reviewed in the United States on April 20, 2009
Verified Purchase
So I'm young, at least I like it/not hate it!(some say "38" ain't young or old) In fact, I love it! I know someone named Lorraine and the track kind of got my attention lyric wise. So I listened(Pink top 1976) these guys are incredibly better than music I preivously thought incredible(Rush, Floyd, UFO, ect) though eccentric, the music is talented with an eccentric lead singer. Though David Byron's mic(not the man's singing) sucked in the concert, I heard this in the original recording and he sounds sharper and more cutting then that conecert, probably some tech glytch in the microphone. Why did Ken Hensly get a superior mic? A good organist though he is! The drummer is incredible in the concerts as is the organist. The gitar/bass play in differing medolic/rythmns. In an interview, the group said thier concerts are more flippent and vigorous than thier bluesy albumns, yet I like it that way! I do prefer Byron's voice on the albumns. Other tracks are just as incredible usually the gitar player(either Mick Box or Ken Hensly who plays it differnt) gets my attention especially "Spider woman" and mostly the distinct bass gitar playing in soulful upper end in the rest of these tracks(and in Sweet Lorraine) on par with the late sixties/early seventies(though rarely) also in the nineties one can develope a taste for bass listening and playing it if one listens to this wonderful "Ear candy" as someone pointed out. Usually a blues element, the upper ended style(still referring to Gary Thain's bass gitar playing) is used in a lot of(real) rock and roll of this decade. Lee Kerslake's percussive element is so fast as to seem to blend to one noise(as the front end of a car's engine in high RPM, w/o exhaust pipe sound) but you only notice his energy in concerts. The albumns are more precice/less tempo. More drum element though. If you have liked classic rock since teen hood(even if your young) you can adapt quickly and enjoy, if you don't(and this is in reference to what other people have said) Ken's heavy organ music will overwhelm you. You need to develope a taste for experimental music like this to like it at all!(like dark dark beer or something) When I was a kid I couldn't have. Yes's Tony Kaye got me interested in Organ music when I was 21. Geddy Lee in bass when I was nineteen or something. that was nearly 20 years ago! Took long to develope a liking to music with such heavy elements of instrumentalists.
Read more
2 people found this helpful
Helpful
Comment Report abuse
See all reviews

José Henrique
4.0 out of 5 stars Uriah Heep - "The Magician's Birthday"
Reviewed in the United Kingdom on May 6, 2018
Verified Purchase
This is the band's fifth album. He may be the weakest among the top six, but it is not to be discarded. It has a good consistency between the tracks, standing out the title track of the album. No music is bad or disposable. This version with a second alternative disc enriches the work. These are alternate versions that were not previously released. Interesting! Very good. Note 8.0.
Read more
5 people found this helpful
Report abuse

Mr. L. Murphy
5.0 out of 5 stars Classic from my teenage years
Reviewed in the United Kingdom on May 17, 2013
Verified Purchase
I have very fond memories of this album even though the track "Sweet Lorraine" simultaneously blew my then stereo`s speakers when the synthesiser kicked in at the start of the verse!

The band were brought to my attention by one of my school teachers who had a few of Uriah Heeps albums (ahhhh, vinyl gatefolds and mirror covers lol)

At the time Prog Rock was in full swing with Yes being the flag bearers and to have one of these albums tucked under your arm going into the 6th form common room meant you had kudo`s for your intellectual taste.......ha ha ha those were the days!

The tracks dont have a coherent storyline like some classic Prog Rock but it more than made up for any shortcomings with the high quality of the musicianship on display.

David Byron is definitely one of the UK`s great lost and under rated singers and surely deserves a retrospective regarding his voice.
Gary Thain was one of rock musics truly great bass players up there with Andy Fraser and Jack Bruce.

In fact the whole band were top quality including the songwriting talents of Ken Hensley who had a good knack for powerful and sensitive rock music.

All I can really say is I highly recommend this great eriod piece to anyone who likes to turn the lights down low, light the candles and disappear into a fantasy world of Warlocks, Demons, Wizards and tune into some seriously good songs.

Ian Gordon
4.0 out of 5 stars Dated, but still likeable.
Reviewed in the United Kingdom on November 1, 2019
Verified Purchase
Bought this on vinyl in 1972, so it was nice to hear again. This album comes from the classic line up of Uriah Heep ( from 1972 - 1974). As it is now 48 years old, it can sound a bit dated, but there are some gems on this album. I was lucky enough to get the 2 disc collection which features alternative versions of the whole album, plus the original album has been remastered for excellent sound quality. Stand out tracks (for me) are Spider Woman, Rain and The Magicians Birthday, although I would say that there are no weak tracks here. I'm certainly not disappointed with this collection, and it is great hearing them again.
Read more
Report abuse

Kindle Customer
3.0 out of 5 stars Sounds a bit thin
Reviewed in the United Kingdom on June 5, 2020
Verified Purchase
A little dated but has it’s moments with some great tracks, production could have been better sounds thin and a bit lifeless no depth. Cover is a fold out double with one of Roger Deans best paintings a faithful production of the original. Deserved a better pressing than this one of Heeps finest blast from the past.
Read more
Report abuse

rainbow man
4.0 out of 5 stars Fork Handles
Reviewed in the United Kingdom on June 1, 2018
Verified Purchase
awesome! The alt versions are worth it alone and the history behind the making of is fascinating.

If you haven't ever bought this..........try it!
Read more
3 people found this helpful
Report abuse
See all reviews