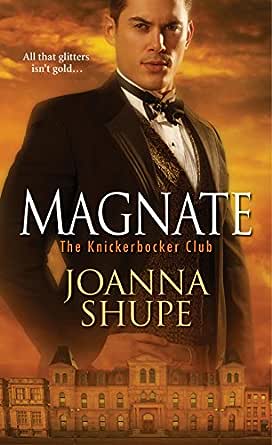 You've subscribed to The Knickerbocker Club! We will preorder your items within 24 hours of when they become available. When new books are released, we'll charge your default payment method for the lowest price available during the pre-order period.
Update your device or payment method, cancel individual pre-orders or your subscription at
Your Memberships & Subscriptions
There was an error. We were unable to process your subscription due to an error. Please refresh and try again. 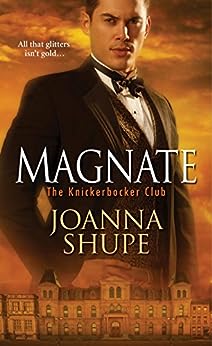 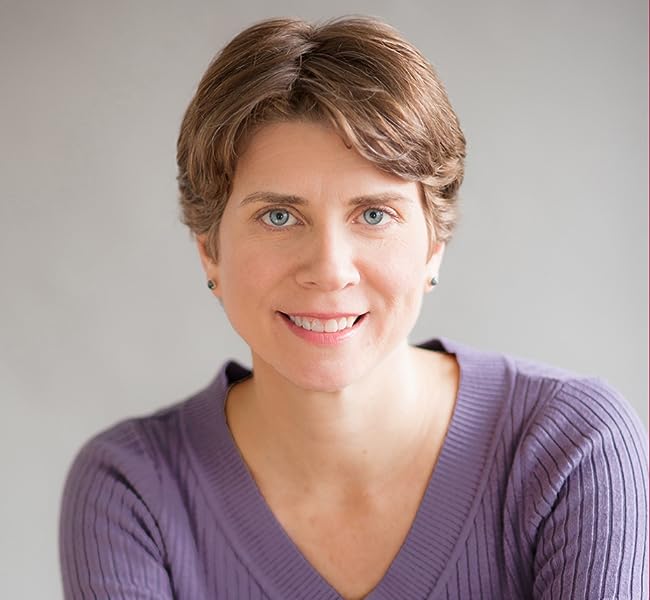 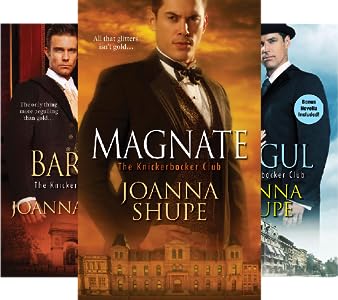 "Along with her finely developed characters, [Shupe] gives an informative view of stocks and speculation, and pairs a man and a woman from vastly unconventional backgrounds in this sexually charged, intense, poignant and powerfully written love story." - RT Book Reviews 4.5 stars (TOP PICK!)
"This original and captivating historical romance splendidly portrays two protagonists with complex and layered personalities." -- Publishers Weekly (STARRED REVIEW)
"A determined heroine ahead of her time and a daring, sometimes ruthless entrepreneur who clawed his way to the top find validation in an engaging romance that successfully launches a trilogy highlighting New York's opulent Gilded Age." -- Library Journal (STARRED REVIEW)
"Readers will enjoy this entertaining romance about two people who refuse to let society dictate whom they love." -- Kirkus Reviews

Joanna Shupe has always loved history, ever since she saw her first Schoolhouse Rock cartoon. While in college, Joanna read every romance she could get her hands on and soon started crafting her own racy historical novels. In 2013, she won Romance Writers of America's prestigious Golden Heart® Award for Best Historical. She now lives in New Jersey with her two spirited daughters and dashing husband. Visit joannashupe.com.

Join Joanna's mailing list to learn of new releases and giveaways: bit.ly/1qyg47L
(Just cut and paste the link into your favorite browser.)

4.2 out of 5 stars
4.2 out of 5
138 customer ratings
How does Amazon calculate star ratings?
Amazon calculates a product’s star ratings based on a machine learned model instead of a raw data average. The model takes into account factors including the age of a rating, whether the ratings are from verified purchasers, and factors that establish reviewer trustworthiness.
Top Reviews

Kindle Customer
4.0 out of 5 stars Gilded Age NYC
Reviewed in the United States on May 1, 2016
Verified Purchase
Lizzie Sloane is the epitome of Knickerbocker high society. She is beautiful, well bred, and comes from old New York money. She should be the reigning princess of Washington Square. But Lizzie has no interest in society, its stifling rules or marrying well. She is more interested in playing in the high stakes of the stock market and running her own investment firm. Her brother, a railroad baron, refuses to back what he thinks is an insane plan, women of Lizzies' s station didn't go into business plus they weren't even allowed on the trading floor of the stock exchange. So Lizzie decides to look for a financial backer and lands on Emmett Cavanaugh' s doorstep. Lizzie thinks Emmett is he brothers friend so she approaches him with her plan and to her surprise the handsome steel magnate agrees to her wild scheme provided she can demonstrate her ability to play the stock market. He gives her three weeks to double his investment before he commits to going into business with Lizzie. Lizzie for her part is wildly attracted to Emmett, a handsome man unlike any in her set. Emmett is a self made millionaire who crawled out of the gutter and the tenements of New York to become a force to be reckoned with. He cares nothing for society and propriety and is happy to stay an outsider since old NY society, led by the formidable Mrs Astor, looks down their nose at anyone who can't trace their roots to the original settlers. For his part, Emmett finds himself.unwillingly captivated by Lizzie' s intelligence and insanely attracted to her but deep down feels unworthy of her. The scars from his past are deep and his fears of abandonment make him distrustful and suspicious of everyone's motives including Lizzie' s. He decides to avoid dealing directly with her but his brother has other plans which definitely did not include Lizzie' s brother finding her in a compromising position with Emmett. The result is a forced marriage through blackmail and a bride unwilling to settle for anything less than a devoted, loving husband. Lizzie plans for an annulment since it's clear Emmett didn't want to marry her but their out of control chemistry and buried feelings will not be denied. An epic snowstorm throws them into close proximity that will make or break their rocky relationship.

I had only previously read the novella that introduced the series and while I didn't care too much for that book, I liked the authors voice enough to give this book a shot and I'm glad I did. This author reads like a cross between Lisa Kleypas and Judith McNaught. Like Kleypas class differences trope plays a big part, notably a hero from humble beginnings works his way out of the slums and like McNaught there are misunderstandings trope, mostly on the hero's part, that could be resolved with one good conversation. This combination works very well here though. Emmett' s mistrust of Lizzie' s motives were understandable given his history. The love scenes were romantic and pretty steamy for a historical. The h/h had great chemistry and the secondary characters well developed. Gilded age New York was brought to life perfectly and the historical facts were blended seamlessly into the story. My only quibble and the reason this book failed to be five star read was that while I can deal with a hero with Alpha-hole tendencies *read: treats the heroine poorly due to his own issues* I require a proper and preferably long grovel at the end. In other words I would like the heroine to put the hero through the wringer. It's only fair. While Emmett apologizes and grovels a bit, Lizzie is much too quick to forgive and fall into his arms again. Aside from this I highly recommend this book. I am highly looking forward to the next book in the series with Lizzie' s snobby brother as the hero. Here's hoping he gets taken down a peg or two by a highly unsuitable heroine. Highly recommended.

Wkonsunshine
4.0 out of 5 stars I want to learn more about this age
Reviewed in the United States on May 16, 2017
Verified Purchase
I am used to reading historicals. I love historical novels. I majored in history in college and went to graduate school to study U.S. History. What strikes me is that often in the romance world, "historical" novels default to European stories, especially the Regency Era. However, Joanna Shupe reminds us that there are plenty of stories to be told in the Gilded Age of U.S. History. It is the era between the Civil War and World War I when industrialization made people very wealthy. It is the time of glamour and corruption. Those in high society had very strict social norms that rivaled the British ton. And this is also the age of Horatio Alger - the rags to riches stories that fuels the belief of meritocracy. The Gilded Age has so many possibilities.

I really enjoy the evolution of our main characters. Emmett Cavanaugh is our Horatio Alger-esque hero who grew up in the Five Points slums to become one of the riches men in New York City. A member of the Knickerbocker Club, this elite group of me wield their influence to shape the politics and business in New York City and beyond. These men are the movers and shakers of their age.

Elizabeth Sloan bristles under the restrictions society has for women. Those who defy the norm are often outcasts or are seen with suspicion. However, Elizabeth is determine to forge her own path in the world of finance. She only needs someone to give her a chance.

I love strong and smart female characters and Elizabeth easily fits the bill. I enjoy her tenacity and her ability to outsmart the men in her life. She is adventurous and unconventional. Emmett is hardworking and hard-edged, but a loving brother. He is totally focused on his business but with her, he feels alive: "...she'd burned hot and bright, a live electric change in his arms. A jolt of current that reached the long-dead places inside him." The relationship takes a through a gamut of emotions and it reaches a truly satisfying end.

This book triggered a fascination from me to learn more about this age. I can't wait to get to the next book.

P. Shropshire
4.0 out of 5 stars A new-to-me author that I enjoyed
Reviewed in the United States on June 1, 2016
Verified Purchase
This is first time I've read Joanna Shupe, but I've heard good things about her and to be completely honest, I was seduced by the book cover. Lol! Also, I found the time period different and intriguing.

I liked the H and h - opposites in background. He spent his childhood in the New York slums as a son of an abusive, alcoholic father and whose mother had left because of the abuse. Emmett found he had a talent for numbers and finance and has spent years building his empire and caring for his younger brother, now a doctor, and their two young sisters.

Elizabeth is from New York Old Money, the Knickerbocker set, but she, too, has financial acumen. But as a female, she isn't allowed to exercise that talent. Her older brother insists she should concentrate on society and finding a husband. But she wants to open her own brokerage firm, so she goes to Emmett and makes him a wager and if she wins, he will provide the capital for her business.

I really enjoyed the story, the setting and period details. I look forward to the other novels and novellas in the series.

Mrs CM Rodgers
5.0 out of 5 stars A good series
Reviewed in the United Kingdom on April 6, 2019
Verified Purchase
An interesting perspective on the US at that time ands strong minded women.
Read more
Helpful
Sending feedback...
Thank you for your feedback.
Sorry, we failed to record your vote. Please try again
Report abuse