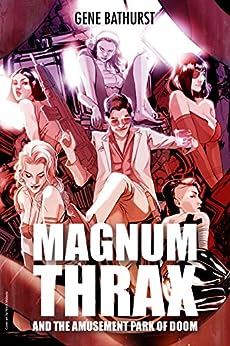 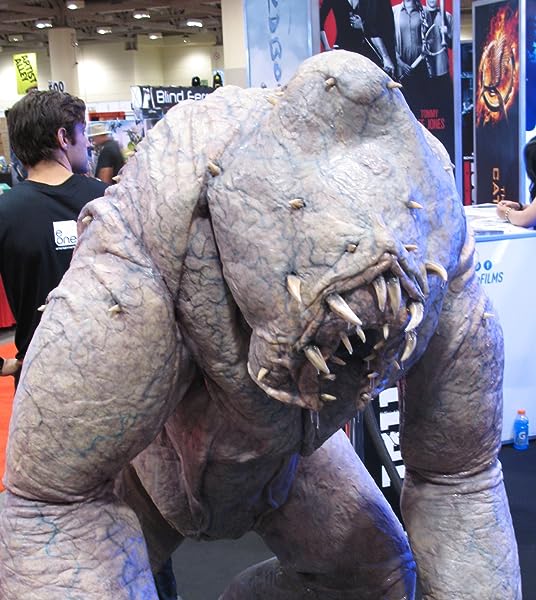 Magnum Thrax and the Amusement Park of Doom Kindle Edition

Pop Bop
TOP 500 REVIEWER
4.0 out of 5 stars Comic Sci-Fi Is So Hard -- This Is A Worthy Contender
Reviewed in the United States on January 10, 2018
Verified Purchase
This book is much, much better than the blurbs and the cover might lead you to believe.

With the reference to Pleasurepit Five and the combat sexbots, the impression is that this is going to be a sci-fi Dean Martin/Matt Helm action sex comedy. Well, it is a little. But, and this is a big "but", only a little, because the author has some fun with the idea of sexbots being repurposed as soldiers, and then once we've done some leering and oogling and a few jokes, he lets that go and moves on to a much better book.

The story is that the few remaining civilized outposts on Earth are threatened by an attacking rogue amusement park, (think Disney by way of The Borg). An android delivers a weapon to Pleasurepit Five and our hero, Magnum Thrax, is the only one who can travel across the Death Zone to enlist the technowitches into the fight against this evil. So, what you really get is a sort of Mad Max, Lord of the Rings, Dirty Dozen, high tech mashup.

But here's the really good part -- the post apocalyptic world is beautifully conceived, the techno/nano/quantum gobbledygook is wildly inventive, the characters are inspired, and the narrative and dialogue are unrelievedly funny.

First off, there is a cool creature or sci-fi wrinkle or social alt-world angle on every page. This is a post-apocalyptic world after all, and the how and the why, and the consequences, of the apocalypse lend themselves to a lot of edgy and sly throwaway humor about how things used to be.

Next, the author never met a nano-thingy he didn't love. The whole plot could be jettisoned and it would just be fun to explore the goofy or lame or fascinating or silly tech that's on display here. There is one of every kind of android, robot, sexbot, weapon, communicator, advanced power source, photon thing, quantum whatzzit, etc. that you could possibly come up with.

Third, the characters are very well done. Thrax is a bit full of himself, of course, but he's a decent hero. The sexbots get to have personalities. The villain is a hoot, ("so needy!"). And the list goes on. Many incidental characters are written with great care, which gives the story more weight than just a funny space opera. There are at least two engaging AI's, and even some of the hardware gets decent lines.

Finally, and best, the tale is consistently funny. Very little of the humor is in your face, and none of it is heavy-handed or stoopid. There are lots of dry throwaway lines, deadpan observations, and wry or edgy musings. The narrative is funny, but actually fairly subtle. There is a lot of cross-talk and snappy dialogue, especially between Thrax and his techno-nerd best friend. It's smart and clever stuff.

So, I thought this would be a sort of disposable one-note joke kind of entertainment. Turns out that it was both a decent sci-fi adventure and a funny buddy-style thriller with a crunchy dystopian coating. Who knew?

(Please note that I received a free ecopy of this book without a review requirement, or any influence regarding review content should I choose to post a review. Apart from that I have no connection at all to either the author or the publisher of this book.)
Read more
3 people found this helpful
Helpful
Report abuse

Kindle Customer
5.0 out of 5 stars Post Apocalyptic Romp
Reviewed in the United States on March 2, 2015
Verified Purchase
On his Amazon page the author calls this novel a post apocalyptic romp. That seems right because you can't stop laughing while reading this.
Read more
Helpful
Report abuse

Kindle Customer
5.0 out of 5 stars Got this one so I could trash it but someting strange happened instead
Reviewed in the United States on March 16, 2015
Now this is one strange and awesome book. This book reminded me of "Go-Go Girls of the Apocalypse" by Victor Gishler. It is unabashedly over the top and as weird as you can get. If it was made into a movie it would probably be Directed by Mel Brooks, in the vein of "Space Balls", "Flesh Gordan" "Barbarella" and "Ice Pirates" Beneath it all is a very sound plot that plays out well right up to the end. I got this book prepared to rip it to pieces but instead must praise it as a nice bit of fun satire! Is this book for everyone??? No but for the ones who get it,YES
Read more
3 people found this helpful
Helpful
Report abuse

Long Time AC
VINE VOICE
4.0 out of 5 stars Old Sci-Fi Noir feel with comedy
Reviewed in the United States on October 7, 2018
Part satire and part noir with comedy, this book is different. The humor makes it. If it were a movie, it would be one of those "B" movies that I love watching from time to time.

My copy came from Net Galley. My thoughts and opinions are my own. This review is left of my own free will.
Read more
Helpful
Report abuse

ZombieRay
4.0 out of 5 stars amusing
Reviewed in the United Kingdom on June 24, 2015
Verified Purchase
enjoyable read
Read more
Report abuse
See all reviews
Back to top
Get to Know Us
Make Money with Us
Amazon Payment Products
Let Us Help You
EnglishChoose a language for shopping. United StatesChoose a country/region for shopping.
© 1996-2021, Amazon.com, Inc. or its affiliates