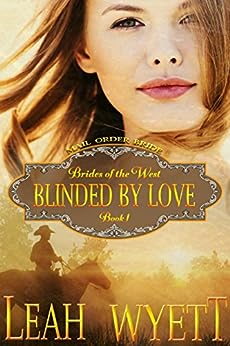 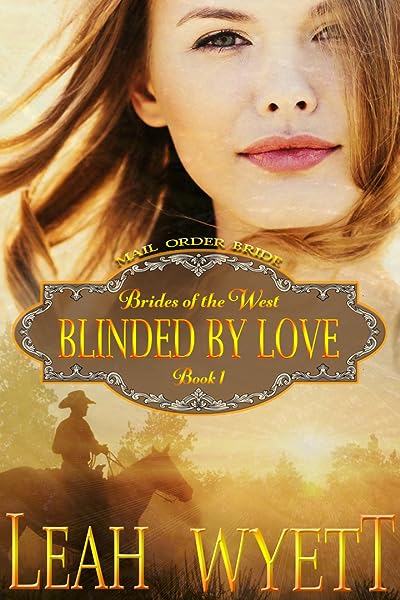 by Leah Wyett (Author) Format: Kindle Edition
Book 1 of 3: Brides Of The West
See all formats and editions
Sorry, there was a problem loading this page. Try again.
In 1870, Hazel Lynn Morgan was a girl right on the verge of becoming a woman. She lives in a small town on a farm in Ohio, where nothing new or exciting ever happens. She has survived this long by reading books about exotic places and using her imagination, or what her Ma has termed, her “Magical Thinking.”
Will a simple mail order bride ad placed by a cattle rancher in Texas named Heath Key change Hazel’s life for the better? Or will the secret that Heath is hiding threaten to ruin both of their lives? Will the man who has been by Heath’s side as his best friend since childhood bring them closer or come between them in the end?
Follow Hazel on her journey to adulthood as she discovers that sometimes you have to close your eyes to really be able to see.

All 3 for you in this series See full series

pc
4.0 out of 5 stars Ebook
Reviewed in the United States 🇺🇸 on September 29, 2021
Verified Purchase
She signs up to be a mailorder bride and falls for the man she is corresponding with. He has a secret and sends his best friend with a letter to explain why he hasn’t sent a photo. She believes that his scars won’t make a difference
Read more
Helpful
Report abuse

Granda
5.0 out of 5 stars Blinded By Love
Reviewed in the United States 🇺🇸 on January 13, 2023
Verified Purchase
This is a great clean heartwarming story. I enjoyed the characters.
I would recommend this book. A page turner for sure.
Great author. Thank you.
Read more
Helpful
Report abuse

H. W. Stone
3.0 out of 5 stars structure and detail at odds
Reviewed in the United States 🇺🇸 on May 19, 2022
Verified Purchase
The structure of the story was well planned, albeit in a manner I did not care for, but the details-- spelling, word choice, continuity-- the progression of the action and the timeline and names seemed to be neglected.

I have been looking at "the fragments of the puzzle" sets where several novellas-- usually three to five-- are used to create an overstory that uses different factors and actions to create a much, much stronger and longer novel. That is how I wound up reading this book. Most of the complied novella series pay a lot more attention to the details, and that lack of attention hurt the story badly, and showed it was not a story, but part of a story.

It was a bit more realistic in the staying together before the wedding aspect, something that a huge majority did, at least according to biographies and history accounts of a town or a region. It was also accurate in that it allowed for "not nice" characters-- even if only briefly enough-- so it was not a bunch of wonderful, hard working people never overstepping the lines or doing anything untoward. Bad existed, it is not ignored.

I never got drawn in deeply enough that I wanted to know what happened next. That means the next novella on the pile remains there, untouched. It was interesting, fairly good, but not strong enough, much like a magnet might "grab ahold" of a steel plate and allow you to tug at it, but not have the pull to lift the plate into the air, always tugging the plate and then the plate falling away.

The part that hurt me the worst was here we have a really intelligent woman and she goes ga-ga and we have to wait for her to reboot to move the story forward.

It really earned five out of ten stars, but this is a five star system, so two and a half stars is rounded up to being three out of five stars. It is a lot like Angel food cake, light, tasty, but not really that filling.

And I admit that I like Angel food cake-- It was more a treat than a meal, but as part of a larger meal it felt (to me) like putting the desert first.

Brenda J.
3.0 out of 5 stars Cute but Confusing
Reviewed in the United States 🇺🇸 on November 30, 2022
Verified Purchase
The book is nice. There are a few errors in it that had me scratching my head. I am glad that I was able to read it for free. I want to read the second book in order to get closure on the first one but I am not sure if I will purchase it.
Read more
Helpful
Report abuse

Jane Jones
5.0 out of 5 stars Blinded by Love ~ Mail Order Brides ~ Brides of the West ~ Book 1
Reviewed in the United States 🇺🇸 on March 7, 2015
Verified Purchase
Hazel Morgan found life living along the Erie Canal on a farm boring. She found a newspaper by chance and an article for a man seeking to correspond with a woman to come live and start a life with him in Texas. This started a correspondence for several months until she found out that he had lied to her about one aspect of his life. When he told her the truth she realized that learning to love the man within she could forgive him because she was Blinded by Love and his scars did not matter.

The story development was realistic. The character development of Hazel, as she turned into a woman concerned for others rather than herself and accepted her role in life as a mature young woman was heart warming. Heath Key owned one of the biggest ranches in Texas, was a gentleman and despite the lie to hide his scars a lovely man for Hazel to fall in love with.
Read more
Helpful
Report abuse

Kindle Customer
3.0 out of 5 stars Disappointed Ending
Reviewed in the United States 🇺🇸 on September 9, 2022
Verified Purchase
I was liking this book. I like the characters, the morals... but dang it, it didn't end. Just when it started getting more interesting, there was a plot . Then I turned the page, but that was it. There was no end. I wouldn't have picked this book up if I'd realized how disappointing the end (or lack of) would be.
Read more
2 people found this helpful
Helpful
Report abuse

Sarah Noel
4.0 out of 5 stars Short, but very enjoyable historical romance!
Reviewed in the United States 🇺🇸 on May 26, 2015
Verified Purchase
I really enjoyed this story and wish it were longer! The characters were likable and relatable. It's a very quick read, mostly b/c it's so short, but it was a good escape to another time.

I read some of the other reviews and noticed complaints about the cover. I'm guessing the author changed the cover by now, b/c the cover I see is modest and very applicable. When I'm scanning for books to purchase, I admit to largely looking at the covers. And this one drew me in. Plus, I like the historical romance genre.

On a critical note, I also noticed some typos and the use of "Sarah" once. I'm an author myself, and I'll say this book could definitely use another read-through by the author or a skilled proofreader. But overall, I enjoyed the author's voice and writing style. It wasn't overly flowery, which I don't like. The details were just enough for me. Definitely could've been longer and more in-depth, but it's still a good short story.
Read more
One person found this helpful
Helpful
Report abuse

Pat
4.0 out of 5 stars Believable Western Romance
Reviewed in the United States 🇺🇸 on October 10, 2021
Verified Purchase
Blinded by Love is a realistic historical romance with is plot line and characters. Finishing this well-written novel leaves the reader eager for more!
Read more
Helpful
Report abuse
See all reviews

Linda Gilmore
5.0 out of 5 stars Great story
Reviewed in the United Kingdom 🇬🇧 on July 29, 2020
Verified Purchase
Really lovely book and can't wait to read the other 2 in the series. Well worth reading. HIGHLY RECOMMENDED.
Read more
Report abuse

Moose Girl
3.0 out of 5 stars Ok
Reviewed in the United Kingdom 🇬🇧 on September 29, 2014
Verified Purchase
This was ok. Not awful but not brilliant either. Not much actually happened during the book and it ended fairly abruptly, leaving me to wonder what the point of it was. It was more a book about penpals than a romance.
Read more
2 people found this helpful
Report abuse

Sheila
5.0 out of 5 stars A must read
Reviewed in the United Kingdom 🇬🇧 on July 30, 2017
Verified Purchase
I absolutely loved this book. Have already loaded book 2 can't wait to get started on it. Blinded by love was amazing a beautiful and brilliantly written story.
Read more
Report abuse

by kindle fan
5.0 out of 5 stars a book thats a brilliant read
Reviewed in the United Kingdom 🇬🇧 on July 24, 2014
Verified Purchase
i have to say i have never enjoyed a mail order bride book as much as i enjoyed. this book it was so refreshing for a person to fall in love using their heart not their eyes
Read more
One person found this helpful
Report abuse

Jan
5.0 out of 5 stars Very good
Reviewed in the United Kingdom 🇬🇧 on August 8, 2017
Verified Purchase
Full of intrigue and romance , having finished this part I've now got to go find the second book .
Read more
Report abuse
See all reviews
Report an issue
Does this item contain inappropriate content?
Report
Do you believe that this item violates a copyright?
Report
Does this item contain quality or formatting issues?
Report