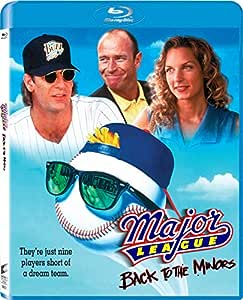 Major League: Back to the Minors [Blu Ray] [Blu-ray]

What do you do if you re the new manager of the minor-league team called the Buzz? One suggestion: pray for rain! Instead, Gus Cantrell (Scott Bakula) turns his team from a laughingstock into the equivalent of blue-chip stocks in this third Major League comedy that reunited five series returnees, including wisecracking play-by-play man Bob Uecker. The game may not be over til the fat lady sings, but when Cantrell first skippers the Buzz, she's a-hummin before the team takes the field. The catcher is living proof why the chest protector and other protective gear are called the tools of ignorance. The ace pitcher should earn frequent-flyer miles for the fast balls opposing batters sock into orbit. The double-play combo s motto should be to error is human. The star slugger is a legend in his own mind. They play on diamonds. They work for peanuts. Batter up!

4.7 out of 5 stars
4.7 out of 5
212 customer ratings
How does Amazon calculate star ratings?
Amazon calculates a product’s star ratings based on a machine learned model instead of a raw data average. The model takes into account factors including the age of a rating, whether the ratings are from verified purchasers, and factors that establish reviewer trustworthiness.
Top reviews

saxman
5.0 out of 5 stars Major League Back To The Minors Is A Hit
Reviewed in the United States on October 29, 2017
Verified Purchase
I enjoyed all the Major League series of movies. This one was the third (last) one made and is clearly low budget. It does star one of my favorite actors, Scott Bakula (Quantum Leap). He plays kind of a washed up minor league pitcher at the end of his career and winds up managing a minor league team, The Buzz. This is Thad farm team for the Minnesota Twins. Scott’s character. Gus Cantrell doesn’t see eye to eye with the twins Manager. Throw in Corbin Berenson, Bob Uecker, and cute storyline and it’s actually not a bad movie. I own it now. You can too! :)
Read more
3 people found this helpful
Helpful
Comment Report abuse

Eric
3.0 out of 5 stars Third Outing Is More of the Same
Reviewed in the United States on April 21, 2014
Verified Purchase
While this third outing in the "Major League" franchise treads the same ground as the previous two films, it still manages to gather some laughs. An improvement over "Major League II," this threequel moves from the MLB to the AAA baseball. Scott Bakula headlines as Gus Cantrell, a minor league pitcher asked to coach the fictitious Charlotte Buzz, the Minnesota Twins' AAA farm team. The Twins are now owned by former Cleveland Indian Roger Dorn (Corbin Bernsen) who thinks Cantrell is the perfect formula for the ragtag team. Bringing back some players from previous entries, Cantrell finds himself more at war with the Twins' manager (Ted McGinley) which leads to the two teams squaring off in the ever-so-cliched "big game." The characters are likable enough but the only real laughs come from Bob Uecker's hilarious commentator, Harry Doyle.
Read more
5 people found this helpful
Helpful
Comment Report abuse

sw,
5.0 out of 5 stars Laugh packed, witty dialog, family fun film
Reviewed in the United States on May 16, 2019
Verified Purchase
I've loved this movie for years! My daughter and I have lots of favorite quotes from this movie that we repeat often. There are a lot of fun visual jokes as well. It keeps you laughing from beginning to end. Scott Bakula is great!
Read more
Helpful
Comment Report abuse

Amazon Customer
2.0 out of 5 stars Such a down grade
Reviewed in the United States on April 2, 2020
Verified Purchase
I loved the first two movies growing up but even back then I knew this movie was not going to be so great. There are a few familiar faces but this movie is just not good. Even the quality of the movie looks like a tv movie compared to the previous two entries. It has some good moments but they can not save it.
Read more
Helpful
Comment Report abuse

Music.Man SDS
5.0 out of 5 stars I Think You'll Like. It
Reviewed in the United States on May 8, 2015
Verified Purchase
While it never got the press of the first two, This is a very good movie. The only connection to them are the use of Roger Dorn, Tanaka, Rube, Cerrano. There is no mention of the Indians. The focus is on a minor league team. Scott Bakula plays manager Gus. It's a good movie. Recommended.
Read more
2 people found this helpful
Helpful
Comment Report abuse
See all reviews from the United States

Shin Kumashiro
4.0 out of 5 stars Four Stars
Reviewed in the United Kingdom on March 1, 2015
Verified Purchase
if you ve seen I and II then you ve got to see this
Read more
Helpful
Sending feedback...
Thank you for your feedback.
Sorry, we failed to record your vote. Please try again
Report abuse

DkJ
4.0 out of 5 stars No will thing. But the nock off
Reviewed in Canada on October 15, 2019
Verified Purchase
Fun to watch way better than the second one. Interesting on how some of the old characters made it to the third one.
Read more
Helpful
Sending feedback...
Thank you for your feedback.
Sorry, we failed to record your vote. Please try again
Report abuse