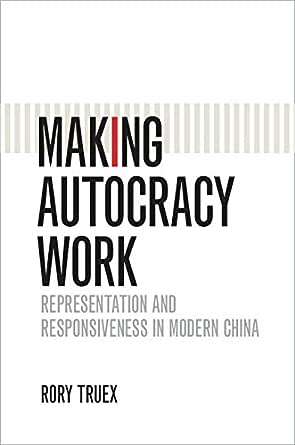 You've subscribed to Cambridge Studies in Comparative Politics! We will preorder your items within 24 hours of when they become available. When new books are released, we'll charge your default payment method for the lowest price available during the pre-order period.
Update your device or payment method, cancel individual pre-orders or your subscription at
Your Memberships & Subscriptions
There was an error. We were unable to process your subscription due to an error. Please refresh and try again. 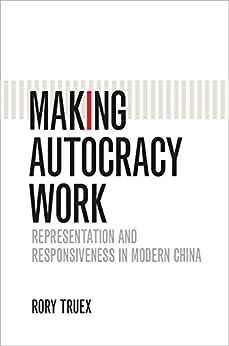 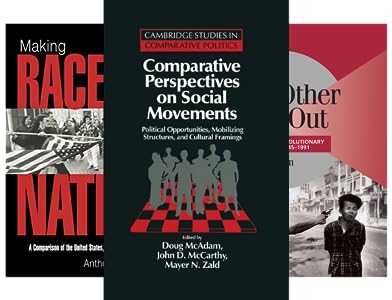 "Rory Truex's concept 'representation within bounds' gets it just right. At a moment when accountability is a crucial question facing scholars of authoritarian durability, Making Autocracy Work is likely to be the final word on representation in China for a very long time. Innovative methodology, deep knowledge of legislatures elsewhere, testable hypotheses tested, sensible findings: readers could hardly ask for anything more."
Kevin J. O'Brien, University of California, Berkeley

"Can responsive government and meaningful representation arise without democratic elections? Can a dictatorship be open enough to address popular grievances without running the risk of regime change? In Making Autocracy Work, Rory Truex addresses these puzzles by developing a rigorous theory that he evaluates using multifaceted empirical evidence from the most important test-case of the twenty-first century: the People's Republic of China."
Milan Svolik, Yale University, Connecticut

"Truex provides a compelling argument and evidence about deputies in the National People's Congress. From his work, we better understand not only Chinese politics, but also authoritarian institutions more broadly."
Jennifer Gandhi, Emory University, Atlanta

"Understanding how authoritarian countries operate and make decisions is vital for operating in today's global economy. Yet, such regimes are extremely difficult to study. And China, given its size, complexity, and secrecy is uniquely challenging. In this remarkable book, Rory Truex provides the most thorough and persuasive account to date of how China's legislative institutions reveal information, shape policy, and reflect the interests of underlying constituencies within the parameters allowed by the regime. The theoretical argument is provocative, but is supported by innovative and careful research design, insightful anecdotal evidence, and the author's deep country knowledge. It is an excellent piece of scholarship that will be a cornerstone of future comparative politics syllabi."
Edmund J. Malesky, Duke University, North Carolina

'Truex (Princeton) seeks to address the questions of whether meaningful representation can arise in the authoritarian setting and how representatives affect regime stability and governance outcomes. ... In conclusion, the author believes that 'if there indeed comes a day when Chinese citizens in the mainland rise up again and demand meaningful political reform, NPC [National People's Congress] deputies will be forced to choose between the authoritarian regime that empowered them and the common people they claim to represent'.' S. K. Ma, CHOICE --This text refers to the paperback edition.

Rory Truex is Assistant Professor of Politics and International Affairs at Princeton University, New Jersey. His research focuses on Chinese politics and authoritarian systems. His work has been published in top political science journals, including the American Political Science Review, Comparative Political Studies, and The China Quarterly, and has been featured in the Wall Street Journal and the New York Times. He is the founder of the Princeton in Asia Summer of Service program, which annually sends Princeton undergraduates to rural China to run an English immersion program for local students. --This text refers to the paperback edition.

Can meaningful representation arise in an authoritarian setting? Making Autocracy Work identifies the trade-offs associated with representation in authoritarian environments and then tests the theory with original data from China's National People's Congress (NPC), the country's highest formal political institution. --This text refers to the paperback edition.
Read more