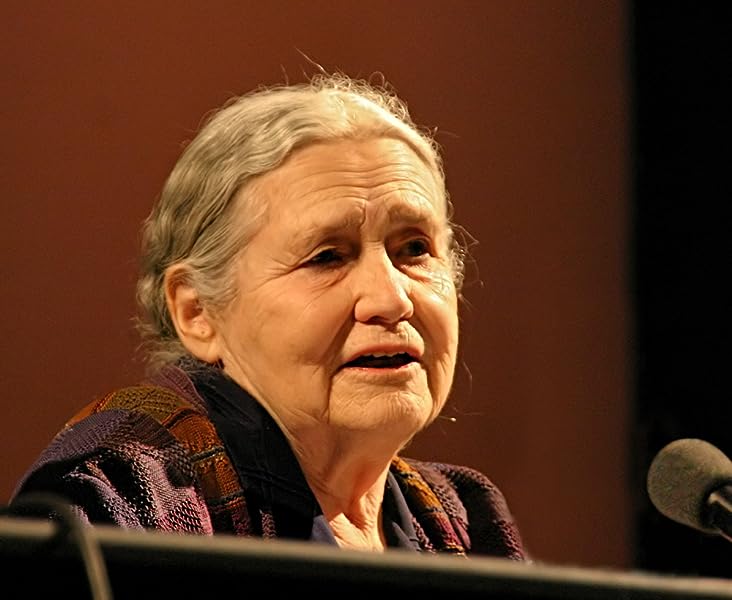 The Making of the Representative for Planet 8 (Canopus in Argos: Archives) Hardcover – January 12, 1982

by Doris Lessing (Author)
4.3 out of 5 stars 30 ratings
Book 4 of 5: Canopus in Argos: Archives Series
See all formats and editions
Sorry, there was a problem loading this page. Try again.
Read more Read less
Previous page
Next page

"A Killer's Mind" by Mike Omer
The New York Times and Washington Post bestselling serial-killer thriller that will leave you wondering, is the past really in the past? | Learn more

4.3 out of 5 stars
4.3 out of 5
30 global ratings
How are ratings calculated?
To calculate the overall star rating and percentage breakdown by star, we don’t use a simple average. Instead, our system considers things like how recent a review is and if the reviewer bought the item on Amazon. It also analyzes reviews to verify trustworthiness.
Top reviews

Anthony
5.0 out of 5 stars Another great allegory
Reviewed in the United States on May 10, 2021
Verified Purchase
A woman on a dying planet, a leader of her people - slowly but inevitably freezing - asks the Canopan visitor why they are allowing this. Can’t they help. Can’t they rescue them. The Canopans are god like beings who in effect created the race on this planet for their own ends. He says no they can’t. Why not!!! She wonders what she is. Her consciousness, her inner essence. He replies enigmatically, ‘what do you think’. Honestly with supposed friends like this who needs enemies. I know what I would have told him. Where to stick his supposed daunting god like superiority. Which when it comes down to it is obviously just so much sand.

Once again over 50% of the ebook is padded with excerpts from the authors other works. Why do they do this? Because they can. Don’t they know how infuriating it is? Sure they do and care not one iota. Like the pain in the ___ Canopans.
Read more
Helpful
Report abuse

Steve Diput
5.0 out of 5 stars Not for the feebleminded (although they may need it the most)
Reviewed in the United States on August 23, 2015
Verified Purchase
How little we know or can imagine what may happen to this planet, or any other, as it has been happening for ages! And the reason for all this: providing experiences developing our consciousness, us the uppermost layer of the planet, or perhaps of this particular solar system.

Remember that Lady Doris was a student and friend of the eminent sage Idries Shah. Thus the extraordinary quality of this whole series Canopus in Argos: Archives of which this volume is a part. Read the whole corpus, I suggest. You will get a wider perspective of what kind of ants, nay bacteria, we are compared to the whole Cosmos. And again, the Purpose of all this: both kind of similar to some parts of some religions and also going so much beyond the popular simplifications, beyond what the author calls Degenerative Disease.

And still it is an easy read, not the dryness of the Western philosophy. Of course if you are capable of transcending the mass media or social media daily nonsense. For people who aspire to thinking as opposed to mechanicality which we mistake for thinking. Be prepared to allow that it is less fictional than you may think.
Read more
2 people found this helpful
Helpful
Report abuse

kevin bollin
4.0 out of 5 stars Thought provoking
Reviewed in the United States on January 17, 2014
Verified Purchase
What happens to a civilization when a planet becomes uninhabitable? Lessing wrote this book decades ago and imagined a scenario of global climate change the opposite of what we are experiencing. As life dwindles around them and existence is diminished for the survivors, the author explores what remains. Unforgettable and thought provoking.
Read more
3 people found this helpful
Helpful
Report abuse

L. Hoff
5.0 out of 5 stars Great series
Reviewed in the United States on December 30, 2013
Verified Purchase
I like Doris Lessing a lot and in particular her Shikasta series. It is not your average sci-fi book. A good read.
Read more
Helpful
Report abuse

wiredweird
HALL OF FAME
5.0 out of 5 stars A story of strength
Reviewed in the United States on October 31, 2003
The people of Planet Eight had happy, productive lives. They seemed born with knowledge of themselves and their visible environment. With Canopus' teaching, they were developing as a culture, strengthening their social structures and integrating new knowledge into their world-view. They knew that their whole people had a future planned among the stars, as citizens of star-spanning society.
Then their sunny, warm planet started to chill. Within a generation, tropical landscape became snowscape everywhere on the planet. Conditions changed so that the promise of their future could not be kept.
It takes some time for the stage to be set properly, but I think this where the real story begins. It is about a people struggling to adapt to increasingly harsh truths presented by the world around them. As conditions worsen, they harden themselves to successively more drastic steps that must be taken to survive. That, I think, is the tragedy of this story: the determination to survive, knowing that the only way goes against all that ever mattered to them. It is about the personal cost of sustaining faith and hope in the face of crushing realities.
More than the others in Lessing's Canopus series, I find this book ambiguous. It is as well written and well paced as the others, and it conveys the same serenity and certainty. This book, however, addresses especially complex issues. I do not share the view that Lessing expresses. I don't have to, though, to appreciate this as a remarkable, personal expression.
Read more
7 people found this helpful
Helpful
Report abuse

Philip Challinor
4.0 out of 5 stars Joining up
Reviewed in the United States on October 22, 2001
Planet 8, a promising outpost of the Empire of Canopus, undergoes a catastrophic climate change. Canopus had planned to move the people to a similar planet, Rohanda; but the wrecking of these plans, as detailed in Lessing's Shikasta and The Sirian Experiments, means that a more arduous course must be taken. As their home freezes with appalling rapidity, the people of Planet 8 must first adapt to the new conditions and then transcend them by forging a group identity which will preserve their society's heritage. They already possess the germ of this collective mind - most obviously in their custom of changing the names of individuals according to the social function they happen to be performing at the time - but there is still a long, hard way to go. Despite its science-fictional plot, The Making of the Representative is closer in style to the social/psychological myth-making of The Marriages Between Zones Three, Four and Five; certainly the prose is equally lyrical, and although the characters are (perhaps inevitably, given the theme) less well drawn as individuals, it's still a vivid, poignant, sometimes visionary piece. Appropriately, given its choral potentialities, the book was the basis of an opera by Philip Glass.
Read more
13 people found this helpful
Helpful
Report abuse

kelly pomeroy
2.0 out of 5 stars Missed the mark
Reviewed in the United States on June 1, 2015
The first part of the book held my interest, but I got bored with the extended introspection and apparent untenable philosophical direction of the excruciating latter part of the book. Maybe I would have had a somewhat different reaction if I had read the earlier books in the sequence - but I doubt it. It's too bad, because I had wanted to read one of Lessing's books for 40 or 50 years - ever since a fellow American I met travelling in Europe told me Lessing was her favorite author. I just never got around to it till now.
Read more
Helpful
Report abuse
See all reviews

oliver furlong
5.0 out of 5 stars makes a fine read.
Reviewed in the United Kingdom on September 26, 2016
Verified Purchase
A slow to start but intriguing insight into communication between different species, and awareness of space, ecology, and architecture.
Doris Lessing has an almost ethereal way of capturing another world atmosphere. This style of writing takes a bit more effort to get into, but it nonetheless, makes a fine read.
Read more
Report abuse

divxalex
3.0 out of 5 stars Can't help here. You might like it or not. It's up to you.
Reviewed in the United Kingdom on October 23, 2017
Verified Purchase
Can't say I loved it, can't say I hated it.
Read more
Report abuse

c
3.0 out of 5 stars A difficult read
Reviewed in the United Kingdom on July 10, 2013
Verified Purchase
I bought this book as it was the next book for our street book club. It was hard to read and I never really got into it.
Read more
Report abuse
See all reviews
Back to top
Get to Know Us
Make Money with Us
Amazon Payment Products
Let Us Help You
EnglishChoose a language for shopping. United StatesChoose a country/region for shopping.
© 1996-2021, Amazon.com, Inc. or its affiliates