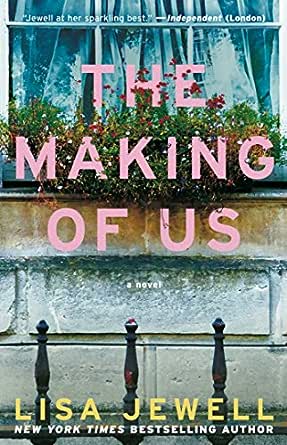 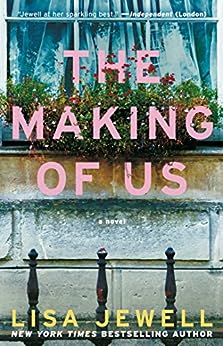 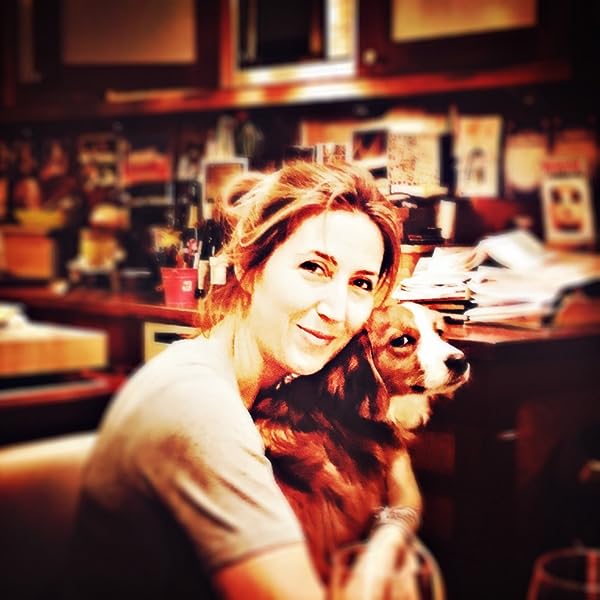 The Making of Us: A Novel Kindle Edition

“Compelling and heartbreaking. . . . I couldn't put it down.” (Jojo Moyes, New York Times bestselling author of Me Before You )

“An engaging tale of choices made and not made, families lost and families gained, this should appeal to fans of Jewell’s work as well as such authors as Jodi Picoult.” (Booklist)

“Jewell’s moving novel immerses readers in the lives of these unique characters through the universal themes of family and a search for belonging. Jewell has written a compelling and entertaining novel.” (Publishers Weekly)

“Filled with heart and humor, this latest from British bestseller Jewell raises all those big questions about identity, family and fitting in.” (Kirkus Reviews)

“The stories of Lydia, Dean, and Robyn are each engrossing on their own; combined with the over-arching storyline of their father, they make for an irresistible read. Anyone who has ever pondered the nature of family or imagined finding a long-lost sibling will be captivated by The Making of Us.” (Shelf Awareness.com)

Lisa Jewell is the #1 New York Times bestselling author of eighteen novels, including The Family Upstairs and Then She Was Gone, as well as Watching You and I Found You. Her novels have sold more than 4.5 million copies internationally, and her work has also been translated into twenty-five languages. Connect with her on Twitter @LisaJewellUK, on Instagram @LisaJewellUK, and on Facebook @LisaJewellOfficial.

Lisa Jewell is the bestselling author of eight previous novels, including Ralph’s Party and After the Party. She lives in London, England with her husband and two daughters. Find out more at Facebook.com/LisaJewellOfficial. --This text refers to an alternate kindle_edition edition.

Glenys Pike was thirty-five years old. She had long dark hair and a neck like a swan. Her husband was called Trevor and was five years younger. The idea was that he would keep her feeling young. The truth was that the fact that he had not yet reached his thirtieth birthday made her feel about as old as her grandmother. Trevor meanwhile still had all the swagger and sway of a young man, his hair a fat plume of mahogany, his stomach as smooth and hard as set cement. He lived like a young man, too; still went to clubs with his mates until the early hours; last summer he’d even taken a Club 18–30 holiday, just because he could. Trevor was fit and strong and smoked a cigarette like a cowboy. Trevor was a god.

But Trevor was also, Glenys had just learned, shooting blanks.

Well, she didn’t know that for a fact. God, no, Trevor Pike would never wank into a jar, not for anyone, least of all a female doctor. But she had to assume it because there was nothing wrong with her. Nothing whatsoever. Five years they’d been trying to make a baby, five years of phantom symptoms and two-week waits and false hopes and lying with her bloody legs in the bloody air after bloody sex, and nothing. Not even a miscarriage to show for it. And this morning she’d been to see a doctor up at the fertility unit for some results and there it was, plain as your face: Perfect Working Order.

“What about your husband, Mrs. Pike, has he been to see us for tests?”

Glenys had snorted laughter out of her nose. “God, no,” she’d said, “I don’t think my husband even knows that there’s such a thing as male infertility.”

“Well,” the doctor had sighed, and leaned back into a chair as though she’d heard it all before a thousand times, “in that case I suggest you try and change his lifestyle. If he’s living that kind of life, it’s probably not doing his sperm any good. Does he smoke?”

“Forty a day.” Glenys had grinned. “Just kidding. Though some Saturday nights, probably not far off.”

“Chips? Are they healthy?” Glenys winked at the doctor, who just blinked back at her unsmilingly. “No,” she continued, somewhat unnecessarily, “I’m just kidding with you. He does like his chips, but he likes pasta, too. His grandmother was Italian. Says it’s in his blood. And he does like two veg. Peas. Potatoes. Carrots. He always eats his veg.”

“He is fit, I’d say. He plays football of a Sunday. He walks to work. He’s got amazing stamina, you know, when we’re at it.”

“Well, anyway . . .” The doctor ignored the unwanted insight into her patient’s love life. “It sounds like there is plenty of room for improvement. Try a bit for another six months or so, no smoking, no drinking, and if there’s still no change, we’ll have to get your husband in for tests.”

“Six months?” Glenys had squeaked. “But in six months I’ll be thirty-six. I thought I was going to be a grandmother by the time I was thirty-six! I can’t wait six months! My eggs—”

“Your eggs are fine,” the doctor had reassured her. “You are fine. If you can just get your husband to change his lifestyle. Oh, yes, and no tight trousers, no tight underwear, you’ll need to get him some cotton boxers.”

Glenys had snorted again at the thought of her Trevor in cotton boxers. Trevor was proud of his packet. He wanted people to be able to admire it, not cover it up in baggy old vicar knickers. And rightly so. “You know,” she said to the doctor, “I know my husband. And I know for a fact that he won’t go for any of this stuff. He won’t go for baggy pants and no fags. In fact, it’s the tight pants and the fags that make him feel like a man. Without them he’d feel like, well, he’d feel like a nancy. You know.”

The doctor leaned across the desk toward her. “Well, then,” she said, “you might need to start thinking about some other options.”

“Options. What sort of options?”

The doctor sighed. “Well,” she said, ticking them off on long fingers, “fertility tests for your husband, lifestyle changes, those would be the first things to think about. But after that, well, there’s adoption, sperm donation, IVF . . .”

“Well, no, he doesn’t give it to you. Not directly. He donates it to a fertility clinic and the clinic matches the right sperm to the right recipient.”

The doctor sighed again. Glenys knew she was just a silly girl from the valleys, she hadn’t given much of her life over to thinking about the big, wide world. She didn’t really follow the news or anything like that, just lived in her lovely little bubble of Glenysness. She’d heard about a woman in the next village who’d stolen some sperm from her boyfriend, sucked it out of a used condom with a turkey baster and blasted it up herself. Got pregnant but the baby didn’t catch. Almost like it knew it was the result of some badness. But this, men giving away their sperm to strangers, this was news to her.

“It’s inserted vaginally, using a syringe. Obviously when a woman is at her most fertile.”

“Wow, a strange man’s sperm. And my egg. Fancy that. So, how do they decide whose sperm to give me? I mean, how do they choose?”

“Well, I wouldn’t say they choose. But you are given a few salient details about the donor. Height. Hair color. Eye color. Nationality. Education.”

Education. Glenys liked the sound of that.

“What, like, they could be a professor or something?”

The doctor shrugged. “In theory. Though more likely to be an out-of-work actor or a student.”

Actors. Students. Professors. The very thought of it. She did love her Trevor. She worshipped her Trevor. He was the sexiest guy in the world. He was cool and handsome and rough and tough and everything a man was supposed to be. Every time he looked at her she got goose bumps. But he wasn’t clever, her Trevor, not in that way. He knew a lot about the things he liked, like rugby and cricket and football and fish. He could even speak a few words of Italian. “Ti amo, mi amore.” Made her want to stick her hand down the front of his trousers and just grab him when he said that to her. But in some ways, well, it pained her to say it, but in some ways he was really quite stupid.

She hadn’t been able to shake the idea of another man’s sperm from her consciousness after that. Walked around for the rest of the day, imagining herself on a white bed, legs in stirrups, introducing the fruit of a stranger’s loins to the darkness of her waiting body, imagining the eager little things scurrying their way up there toward the golden light of her radiant egg. Then she thought of Trevor’s sperm. Drunk sperm, too busy showing off to each other to find their way through the gloam. She imagined them squaring up to each other: D’you want some? Well, do you? Stupid sperm. Stupid, lazy, macho sperm.

By the time she got home from the clinic she was really quite angry with Trevor and his sperm and had all but made up her mind that she was going to do it, she was going to go to a sperm clinic and ask for some sperm from a nice, clever teetotal man. But there he was, as she walked in the door of their cozy little flat just outside Tonypandy. He was filleting a fish on the kitchen counter, wearing his silly apron, the one with the picture of the naked woman on it that his brother had bought him for Christmas the year before, and his face lit up at the sight of her and he was so gorgeous and so silly and so damn perfect, she couldn’t help it, she just wanted to cuddle him and kiss him and not talk about sperm or babies or cotton boxer shorts.

It wasn’t until she woke up four mornings later and felt the wetness between her legs, the arrival of another monthly curse, that she began to feel angry again. What use was a man who fired blanks? What use was a man who could fillet a flounder and kick a ball into the back of a net if he couldn’t even stop drinking for long enough to let his sperm sober up?