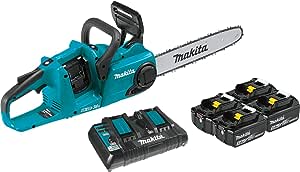 4.7 out of 5 stars
4.7 out of 5
901 global ratings
How are ratings calculated?
To calculate the overall star rating and percentage breakdown by star, we don’t use a simple average. Instead, our system considers things like how recent a review is and if the reviewer bought the item on Amazon. It also analyzes reviews to verify trustworthiness.

Phillip
2.0 out of 5 stars First Makita tool I have ever returned...safety and productivity design defect.
Reviewed in the United States on June 29, 2017
Style: Bare ToolVerified Purchase
This is the first Makita tool I have ever returned (XCU03). I have many, many Makita 18v tools at my home and my ranch, including two of the prior cordless chainsaws (XCU02, which is actually one of my favorite Makita tools). The problem, as others have noted, is the "power" switch. This seemingly redundant power switch is a bit strange, as the prior XCU02 (like nearly all my Makita tools) has no redundant "power" switch. You simply inset batteries and pull the trigger.

In and of itself, the power switch would not be much of a problem, except that it has an auto-shutoff feature that deactivates the unit after 4 seconds of non-use. 4 seconds!!! At first I thought this would just be a minor bother to press the power switch, but in practice I found it quite frustrating to have to press it every time I moved to make another cut, especially wearing heavy work gloves. What I found myself doing to compensate for this problem was to keep pressing the tool trigger (revving the motor) every 2-3 seconds, which prevents a time out. However, this "solution" results in the saw blade spinning (dangerously) while I am moving. This is clearly a safety hazard. Further, I found that I tend to rush to get into position to prevent the saw from timing out - another safety hazard. And, it seems to me that pressing the trigger every 2-3 seconds would drain the battery prematurely. So, as a result of this new "safety" feature, this tool is actually far more dangerous than my other power tools.

This defect was so serious that I contacted Makita tech support. I explained the situation and was informed that my unit must be defective, as this chainsaw was designed to auto power off after 1-2 minutes, and not after only 4 seconds (ahh, that makes more sense). Makita support recommended I return that defective unit and replace it. Several days later the new unit arrived, and I anxiously tested it. Same thing! Powers off after 4 seconds. Disappointed, I again contacted Makita and a different rep told me that the unit is designed to auto shutoff after only a few seconds. He said it was indeed a new "safety" feature, and could not be changed by the user. Of course, I explained experience and safety concerns with the unit, and suggested Makita change the timeout interval to at least 15 seconds. He didn't seem inclined to take my concerns seriously, and we agreed I should just return the second unit as well.

Following this disappointing development, and upon learning that the new "feature" was not actually a power switch, but a safety switch, I looked for ways to possible override it while in use. I considered opening it up and trying to wire around the switch, but decided that I was better off just continuing to use my very functional XCU02 chainsaw, and my Stihl gas chainsaw. However, after playing around with various switch combinations on this new chainsaw, I discovered that if you continue to hold down the trigger release lever in the top of the handle, the unit will not power off until after 60 seconds! That is actually a most helpful discovery, as once I practiced not letting off the release lever between cuts, the new unit was almost as good as it should have been designed originally. I do find that I still accidentally release the lever and have to interrupt my progress to reactivate the safety switch. Nonetheless, I find I no longer needlessly pressing the trigger between cuts.

However, I discovered all this quite by accident. Neither the Owner's Manual nor Tech support informed me of this option, which is an oversight. I have no doubt that there are many users who are unaware of this function and who find it necessary to "rev" the saw between cuts to keep it from timing out. Makita should at the minimum revise the manual, and preferably revise the design to allow at least 15 seconds before the unit times out.

Otherwise, this is a nice chainsaw, which I plan to keep a few days longer to evaluate further. I do note that unlike the XCU02, the XCU03 seems to have very poor low end torque. Mine stalls if I don't fully rev it up before engaging the balde in the wood. In fact, this chainsaw behaves far more like my gasoline chainsaw, which also has the internal combustion engine's poor low end torque. This unit also seems to have a much shorter battery life that the XCU02, despite having a brushless motor (which may explain the low torque compared to the brushed motor). I got about 45 minutes of useful life from the XCU03 with new 5ah batteries (the XCU02 would run for at least twice that long on the same batteries). However, in fairness, the 03 cuts much faster and therefore consumes power more aggressively.

I will update this review as I learn more, but wanted to make potential buyers (and possibly existing users) aware of the safety issues and possible works arounds, as well as flagging to Makita the need to address this problem in the existing units.

UPDATE: After using this replacement saw for another week, I have returned it. I had hoped that I could remedy the "safety" switch issue by simply holding down the trigger lock. But, what I found in practice is that I have to release my right hand to adjust the log for the next cut, or to move branches away for the next cut, and of course thus results in the tool timing out. I got so frustrated that I just taped the trigger lock closed, which worked fine and made the saw very useable. However, this is in itself a larger safety issue. And, despite this temporary improvement, I found that more often that not I reached for the smaller XCU02 saw to cut everything under 4-5", especially as it has far better torque than the 03. Moreover, my wife greatly prefers the 02 because it is more compact and easier to handle.

Interestingly, I just bought one of Makita's larger battery string trimmers, which has a power switch system very similar to the XCU03 chainsaw's. However, the trimmer switch times out after one minute (vs 4 seconds), which makes it perfectly safe and useable.

In summary, until Makita corrects the power switch problem, I cannot recommend this saw. Once Makita fixes the switch issue, this chainsaw will be useful as a replacement for my smaller gas chainsaws, as it does cut fast.

Amazon Customer
2.0 out of 5 stars Nope, I've just returned mine
Reviewed in the United States on November 11, 2017
Style: Bare ToolVerified Purchase
This review is on the new Makita XCU03Z, which I've just returned to Amazon. For context--I'm a Makita user, I have a range of their tools that use the 18V platform, including the XCU02. I have a corded Makita as well, and am very familiar with their electric chainsaws and how they work. I've used the XCU02 extensively, have cleared an estimated 15 tons of Juniper and Pinon with it.
I bought the new XCU03 because I wanted more power and the longer 14" bar. Please note also that Makita claims the XCU03 will fit a 16" bar as well, as an option. I used the standard 14".

While it does indeed have substantially more power and chain speed, in my opinion the XCU03 has two fatal flaws:

1. The first is that, after using for approx. 2 hours, I could no longer get the tool-less chain adjuster to securely clamp the bar in place. No matter how I adjusted it, I could not get the bar locked in firmly. Again, I'm very familiar with Makita's tool-less adjustment system and my best guess is there may be a flaw here. I felt the lack of secure clamping was a safety hazard. I'd suggest using more metal in these critical parts.

2. I used only Makita's 5Ah and 6Ah batteries with this saw, and the saw drained the batteries much too quickly for any sort of practical use. I did not specifically measure the time it took to drain the batteries, but my impression was that it drives batteries down in less than half the time when compared with the XCU02. Even if you run two sets of batteries as I do, existing Makita batteries are simply inadequate. I would wait until Makita comes out with 10 Ah (or higher) batteries before buying this model.

1. As other reviews have noted, the new LED on/off switch is a hassle to use. It is there to extend battery life, but interrupts workflow and is hard to operate while wearing gloves. And who uses a chainsaw without heavy gloves.

2. As with other Makita chainsaws, the tool-less chain adjustment could be made easier, perhaps by making the paddles on the adjusting wheel just a bit longer, and maybe rubberizing them.

3. These electrics are now getting powerful enough that makers should be making more parts out of metal, rather than plastic. This is especially true for clamping and adjusting hardware.

4. I had trouble finding the sweet-spot for the bar-oil adjustment screw. I did not have the tool long enough to dial that in, but given the increased power and RPMs of this saw, be generous with the oil.

1. This is a significant improvement in terms of power over the XCU02 BUT I wouldn't buy this one until Makita comes out with batteries that can handle the additional power needs of this tool. Once bigger batteries come out, this saw could really be a beast.

2. I continue to use the XCU 02 and recommend it for both limb-trimming and tree-removal. I use it pretty easily on wood up to 10" diameter.

3. Keep the chain sharp. A sharp chain will make all the difference with either the XCU02 or XCU03.

Josh Kreviazuk
5.0 out of 5 stars Awesome
Reviewed in Canada on December 7, 2020
Style: Bare ToolVerified Purchase
If the chain is sharp, and you have 2 5.0ah batteries, this thing rips.

It wont run unless you have 2 batteries in it (any makita, even smaller ones) but with 2 1.5ah batteries, it is dead after a half a dozen cuts though 12" round spruce logs.

Angela - POG
4.0 out of 5 stars makita cordless chainsaw
Reviewed in Canada on January 15, 2020
Style: Bare ToolVerified Purchase
We love the saw but on the box it says comes with 2 batteries but there was nothing in the box. That was a bit disappointing as it really was false advertisement.
Read more
2 people found this helpful
Report abuse

Amazon Customer
5.0 out of 5 stars Five Stars
Reviewed in Canada on July 7, 2018
Style: Bare ToolVerified Purchase
Excellent machine, use it for all kinds of renovations.
Read more
Report abuse