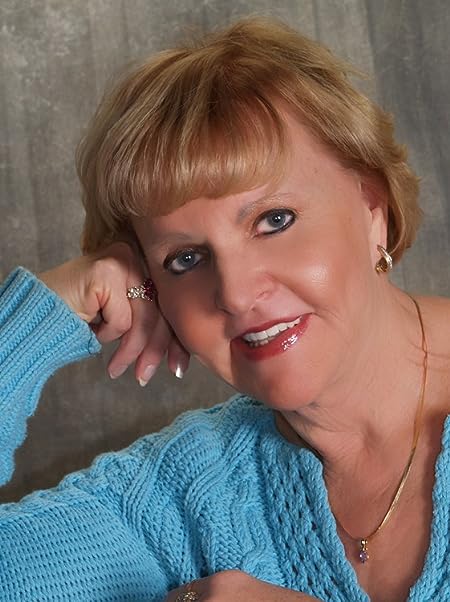 Award winning author, Mal Olson, writes adrenaline kicked romantic suspense. She enjoys skydiving, ski jumping, SCUBA, hang gliding, big wave surfing, car racing, mountain climbing--that is, vicariously through her characters, who are always kick-ass, and often boss her around rather than allowing her to spin her stories the way she intends. (She has, however, personally engaged in zip lining in the wilds of Alaska.)

Her debut novel Shadow of Deceit, is an edge of the seat romantic suspense-thriller set in Milwaukee and parts of northern Wisconsin. Shadow of Deceit won second place in the Romantic Suspense category in the 2013 Write Touch Reader's Award contest for published authors.

A couple of her favorite reviews came from Beverly at The Wormhole, who said, "Wow! This one has it all! Non-stop action, hot and sexy characters, betrayal, smokin' romance, and a thrilling plot--" and Gothic Mom's Book Review, which stated, "In the 150+ books that I read per year, there are very few that receive a five star rating. Shadow of Deceit did just that. Non stop action, sexual tension, an adventure that had me on the edge of my seat...A fantastic book that had me from page one..."

Again, in 2014, Olson won second place in Romantic Suspense in the Write Touch Reader's Award contest for Too Sexy For His Stetson. This time Olson's bossy characters lead her to the mountains of northern Idaho where a deputy sheriff and his female rookie deal with menacing white supremacists, a homicide, a murder cold case, and a threat to a nearby dam--all while trying to keep their hands off each other. Meanwhile, Rambo, the hero's retired K-9, quietly steals the show.

Olson also offers two short stories. Danger Zone, which spent months in the Kindle top 100 free romantic suspense category, is a guaranteed fifteen minute pulse pounder where two strangers survive a rock 'n roll landing on an icy Milwaukee runway and chase a could-be terrorist into the danger zone. Me and Brad, a feel good romance, features an irresistible K9 and was ranked in the Kindle free top 100 list for months in the Contemporary Romance category.

When her characters aren't bossing her around, she squeezes in time for reading, watching Packer football games, flower gardening, jamming with friends on the mountain dulcimer, and hiking in a nearby state forest (or the mountains somewhere). She has three grown children and one granddaughter and resides with her own special hero in southeast Wisconsin. Find out more at www.malolson.com 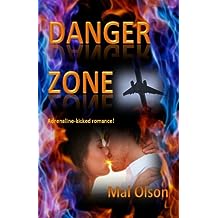 Air Force pilot Katrice Kennedy is a woman with nerves of steel capable of flying an F22 at supersonic speeds. Ex-Delta Force operative Benjamin Thigpen is a Homeland Security specialist immersed in national safety issues twenty-four-seven. They're strangers when they board a 747 in Washington D.C. But are they destined to become kindred souls when they survive a rock 'n roll landing on an icy Milwaukee runway and chase a could-be terrorist into the DANGER ZONE?

Suspense and action in 7000 words that will keep your pulse pounding for the duration. 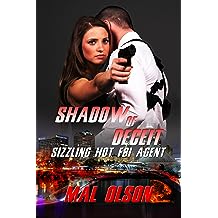 Once Crazaniak convinces Shannon she needs his protection, they partner to unearth secrets her husband left behind—secrets involving a Tanzanian mine that yields perfect blue diamonds coveted by dealers around the world—secrets connected to a terrorist leader Crazaniak has vowed to take down.

With danger surrounding them, two emotionally wounded souls bond, but can they put their demons to rest and trust in love? Can they survive long enough to find out? 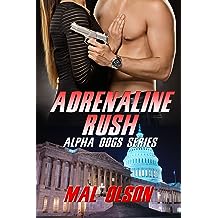 Adrenaline Rush (Alpha Dog Series Book 1) May 31, 2018
by Mal Olson
( 77 )
$3.99
Wounded warrior, Alpha Dog secret agent
Eric Cavelli, is hot on the trail of the world's most wanted terrorist. Annastine Jacobson, Norwegian-born fashion designer and the woman of Cavelli's dreams, is the last person on earth he intends to meet up with—in this lifetime. But she's the only one who can get his team into enemy territory.
In the aftermath of a bombing at a Washington D.C. gala, an unintended encounter plunges the two of them into an emotional tailspin. She thinks she's seen the ghost of the man who was once her soulmate. His cover is on the verge of being blown.
Memories of a long lost love threaten to undermine Eric's mission to stop a massive stockpile of weapons from falling into the hands of terrorists, a mission that will also take down his nemesis, the man who stole his life.
Read more
Other Formats: Paperback 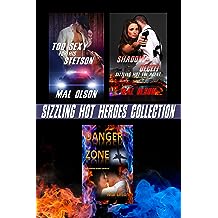 Sizzling Hot Heroes Collection Jun 23, 2014
by Mal Olson
$4.99
A connecting thread joins the three stories in this bundle, which includes a prequel short story and two full length action-packed romantic suspense thrillers.
Danger Zone (short story): Air Force pilot Katrice Kennedy is a woman with nerves of steel capable of flying an F22 at supersonic speeds. Ex-Delta Force operative Benjamin Thigpen is a Homeland Security specialist immersed in national safety issues twenty-four-seven. They're strangers when they board a 747 in Washington D.C. But are they destined to become kindred souls when they survive a rock'n roll landing on an icy Milwaukee runway and chase a could be terrorist into the Danger Zone?
Shadow of Deceit: Sexual heat simmers when Ex-Delta Force operative Tony Crazaniak and young widow Shannon Riedel partner to unearth secrets her husband left behind—secrets involving a Tanzanian mine that yields perfect blue diamonds coveted by dealers around the world. But can two emotionally wounded souls put their demons to rest and bond? Can they survive long enough to find out?
Too Sexy for his Stetson: Rookie cop Brandy Wilcox grew up on her own, on the run, and on the wrong side of the tracks. Driven to prove her mother innocent of murder, she never trusts anyone, not until she meets her new field training officer Lieutenant Blade Beringer. The sexy, Stetson-wearing half of a canine team, Beringer, is honest, fair, and respectable—everything Brandy aspires to be. But as they investigate a ten-year-old murder case, Brandy realizes the number one suspect on her most-wanted list is Blade's idol. Does the forbidden attraction between these two law enforcers have a snowball's chance in the Idaho sun?
Read more 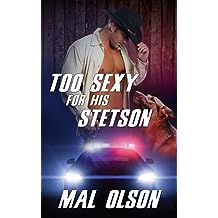 Too Sexy for his Stetson: Sizzling Hot Sheriff (Sizzling Hot Heroes Book 2) Apr 29, 2013
by Mal Olson
( 161 )
$3.99
Rookie cop Brandy Wilcox grew up on her own, on the run, and on the wrong side of the tracks. One burning desire drives her—her quest to prove her mother was wrongfully convicted of murder. She never trusted anyone, not until she met her new field training officer Lieutenant Blade Beringer. The Stetson-wearing half of a canine team, Beringer, is honest, fair, and respectable--everything Brandy aspires to be.
Blade finds training the feisty recruit a challenge, especially when Brandy turns him on like no other woman has. He'd like to get close to her in more ways than one...but he shouldn't. Department rules forbid fraternizing between deputies, and he has personal reasons for avoiding a close emotional relationship with any woman.
When Brandy realizes the number one suspect on her most-wanted list is Blade's idol, she doubts their growing and forbidden attraction has a snowball's chance in the Idaho sun.
Will they live long enough to find out if the fragile bond between them can survive? The odds are against them as they investigate a ten-year-old murder case, as they match wits and brawn with a monster rig on a curvy mountainous road, as they tackle a raging torrent-drenched river, dodge bullets, arrows, and radical supremacists, and finally, as they confront madmen in the process of detonating a bomb at the nearby dam.
"Too Sexy For His Stetson, a must read for the adrenaline junky."

* * *
Brandy’s trigger finger twitched. A bead of sweat tickled its way down her backbone. She was inexperienced, off duty, and miles from her truck, which sat near a trailhead in the mountainous wilderness of northern Idaho, and the intruder she held at gunpoint probably had seventy muscled pounds on her.
She studied the cowboy’s sweet-as-honey, wicked-as-sin smile through the sights of her department-issued Remington semiautomatic rifle. From his pose on the rickety porch of the old log cabin, he assessed her right back. His full lips tugged across Crest-white teeth, exposing a small but sexy gap between his central incisors.
He tipped his head toward the jimmied-open window. “I know this looks bad, Ma’am, but I can explain,” he drawled out “Ma’am” again.
“Deputy Sheriff Brandy Wilcox. Keep your hands where I can see them.”
“Brandy?” Impervious to the deputy sheriff title, he straightened and angled his dusty black Stetson over his forehead so the brim shadowed his cool-water eyes. “Name like that could make a man real thirsty.”
Brandy had heard just about every come-on in the book, but never from a trespasser on the business end of her rifle. She calculated his over-confident grin, the twinkle in his eyes, the tilt of his head—blond curly hair no less. A sensual package that promised a ride on the wild side—if one was so inclined. Which she was not.
Yet something primal tugged deep in her stomach.
Bracing the Remington more firmly against her shoulder, she steadied her aim and revved up her grit. This guy was banking on his wild smile a little too heavily. What he needed was some taming.
“Okay, drop ‘em.”
When he lowered his arms, she said, “Not your hands, your pants.”
For several beats, he stared at her like he hadn’t heard.
“Lose your Levis,” she urged again. She had no desire to shoot him, but she didn’t have handcuffs on her and she wasn’t about to chance his getting away. If it came to a footrace, his long muscular legs could outrun her in a heartbeat. But he couldn’t get far stomping barefoot in his skivvies through the mountainous shale-scabbed terrain. Not that making a break for it was something she intended to let him try.
Read more
Other Formats: Paperback 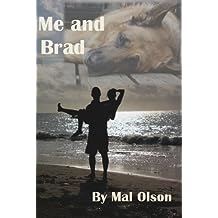 Me and Brad (A short story) Feb 5, 2012
by Mal Olson
( 27 )
$0.99
A feel good short story where an adopted dog plays cupid to a young woman suffering from a broken heart and the sexy sheriff who pulls her over for speeding.