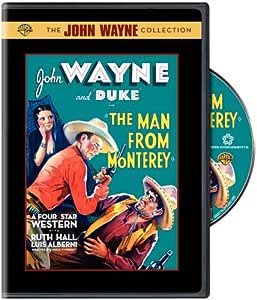 The Man from Monterey

Western about a cavalry officer who helps save a family's ranch from land grabbers.

4.1 out of 5 stars
4.1 out of 5
10 customer ratings
How does Amazon calculate star ratings?
Amazon calculates a product’s star ratings based on a machine learned model instead of a raw data average. The model takes into account factors including the age of a rating, whether the ratings are from verified purchasers, and factors that establish reviewer trustworthiness.
Top Reviews

Einsatz
TOP 1000 REVIEWER
3.0 out of 5 stars “If anyone forgets I’m a lady I’ll break his neck!”
Reviewed in the United States on April 28, 2017
When is a friend not a friend? When the so-called friend is trying to convince you not to register your land before the California deadline states that you must, or risk losing it to public domain. And not willing to take any chances, this so-called friend also tries to coerce the misguided landowner Don Jose Cantares (Lafe McKee) into handing over his daughter to the friend’s disreputable son and local troublemaker, mister fancy pants Luis. A marriage would help make the land grab that much easier. Into this mess rides Captain John Holmes (John Wayne) on his trusty steed Duke. Naturally he falls instantly in love with the commodity Dolores Castanares (Ruth Hall). Of course this puts a crimp in the bad guy’s scheme to get the land and the little lady. But Capt. Holmes is fortunate enough to fall in with a gang of American land grabbers, led by Jake Morgan (Slim Whitaker). And with the help of a fortune telling musician Felipe Guadalupe Constacio Delgado Santa Cruz de la Verranca (Luis Alberni), they work to thwart the dastardly scheme. And yes, Duke the horse plays a pivotal role.

This is a routine western with too much melodrama and not enough action. It’s also played for laughs, which eases all the tension and obliterates any suspense.

Eh. It was just okay.

Dr. James Gardner
2.0 out of 5 stars John Wayne and Duke in another B western
Reviewed in the United States on December 28, 2010
"Man from Monterey" is one of the 60+ B westerns that John Wayne made before his "break-out" in "Stagecoach" (1939). He made it in 1933, one of 14 films he made that year, and the last one he made for Warner Brothers before joining Monogram. This is one of the first of his lead roles.

The film stars "John Wayne and Duke", Duke being the wonder horse. Duke was so well known that Wayne shared billing with him in several films. In the other films, Duke performs more tricks, but in this one he is fairly muted. Duke was a beautiful, huge, white horse. Wayne would go on to ride about a dozen horses during his long career, the most famous of whom was Ol' Dollar ("True Grit", "The Undefeated", "Rio Lobo", "Chisum", and "The Shootist").

Francis Ford (1881-1953) co-stars with Ruth Hall. Francis Ford was director John Ford's older brother. He was a writer and a director and also an actor, appearing in several films directed by his younger brother - "The Informer" (1935), "Drums Along the Mohawk" (1939), "The Quiet Man" (1952), etc. Ford plays an evil Spanish landowner. In almost all his roles under brother John, Francis has only minor parts. In films with other directors, like this one, he had much more screen time.

Slim Whitaker (1893-1960) appears as an ally of Wayne. Whitaker appeared in more than 300 films, from the silent era where he worked as a stunt man from Broncho Billy Anderson. He was close friends with Ken Maynard, Hoot Gibson, Walter Brennan, and Wayne, and appeared in many of their films, most often as a mustachioed bad guy. In 1933 he appeared in more than 20 films.

The film is OK as one of the hundreds of B westerns that were churned out in the 30s. Wayne, though, is pretty bad, and he has a sword fighting scene that is truly pathetic. If you want to see how bad an actor John Wayne could be, this is the right film for you. Otherwise it doesn't have much to recommend it.
Read more
2 people found this helpful
Helpful
Comment Report abuse

Tari Grant
5.0 out of 5 stars movie
Reviewed in the United States on June 8, 2014
Verified Purchase
Movie was bought as a gift for my Father and Mother for Christmas. I am replacing all his VHS tapes with DVD's They arrived in good condition an on time. Thank you.
Read more
One person found this helpful
Helpful
Comment Report abuse
See all reviews from the United States

See all reviews from the United States
Pages with related products. See and discover other items: all western movies with john wayne